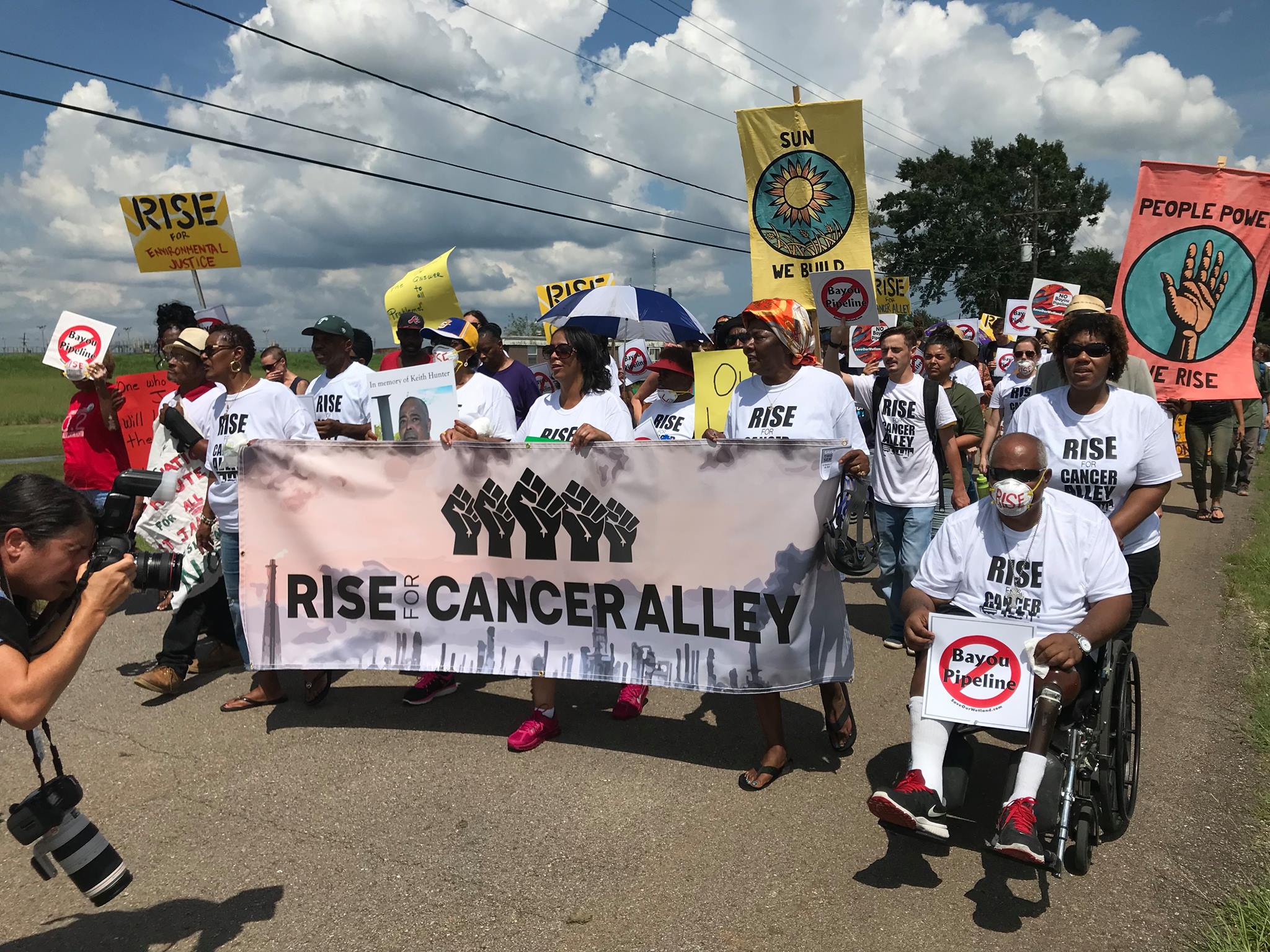 New Orleans         In a close vote, the Louisiana legislature recently rejected an effort by the oil, gas, and chemical industry to allow companies in the state to self-report to the state environmental quality agency any violations of pollution standards from their operations.  The other gift the industry was seeking was the ability to restrict any report and evidence of violation from public inspection and freedom of information requests.  In essence they wanted to report that they had polluted, but keep it secret from everyone and have the state simply take their word for the fact that they had done it, and they were truly, truly sorry, but mum’s the word.  The shocking surprise was not the pure, unadulterated impunity of the industry, but the fact that the arch-conservative Louisiana legislature, long a lap dog for the oil, gas, and chemical lobbyists, didn’t rollover for a tummy scratch, but instead barked a bit.

The stretch of the land along the Mississippi River between Baton Rouge and New Orleans has long been known as “cancer alley” because of the number of refineries and chemical plants located alongside the easy shipping access, and the level of pollution and contamination that comes with such industries.  Many of the communities most victimized have been lower income African-American areas so the evidence of environmental racism has been long established.

The Coalition Against Death Alley (CADA) has recently been organized by a variety of environmental and community groups hoping to bring attention to these issues and the continuing alarming health hazards in these communities.  ACORN’s affiliate in Louisiana, A Community Voice, is a member of the coalition, as is the progressive forum for many groups called Justice and Beyond.

CADA has called a five-day marathon action that would convene at Whitney Plantation, the restored operation highlighting the horrors of slavery near Convent, Louisiana.  From there they are hoping to march from five to seven miles each of three days back and forth across the river to highlight the tragedy, sleeping and eating in various churches along the route until a final rally on the fifth day at Southern University in Baton Rouge.

Part of the route includes traversing the famous Sunshine Bridge, so named in the Long era because it seemed to be connecting little more than sunshine from one side of the river to the other.  That climb would be 2.8 miles, so the flesh would need to be as strong as the spirit there, if it’s allowed.  The two parishes of St. James and St. John are both trying to deny the CADA marches permits that would allow some marches along the highway and over the bridge.

Admittedly, CADA faces a number of barriers to make this all come together in the blend of civil rights tactics and human rights and environmental concerns that they are seeking to merge in order to continue to bring attention to the imperiled communities facing major corporate and industrial interests.  Raising issues of climate change is front page news, but these issues have to come to the fore from the back pages, so here’s hoping they attract the attention to this march that it deserves. New Orleans   Social Policy Press is releasing an e-book, Guns and Kids: Can We Survive the Carnage? by Frank Strier, a legal scholar and emeritus professor from California State University. Not surprisingly, the facts and figures are chilling. We may be horrified by the outrages in San Bernardino and Connecticut with military style assault weapons, but the overwhelming number of deaths, including to children, come from handguns.

Part of the problem is plain and simple access to guns. Combine access with age and the results too often are tragic. The evidence is everywhere.

Recently I was talking to Pat Bryant, the co-convener of a very interesting New Orleans-based coalition called Justice & Beyond, and Beth Butler, one of the steering committee members, on Wade’s World. Among other projects they have recently been organizing a quiet protest of solidarity in one of the most depressing and difficult venues for direct action: the courts. The other day more than one hundred crowded into a local courtroom, many wearing t-shirts saying “Justice for Jerome,” and though the arguments are complicated now, the issue of guns-and-kids lies at the root of the confusion.

Jerome Morgan was 16-years old. He and a bunch of other 16-year old teens were at a party. Someone said something to someone, got mad and stomped off. Later someone came back to the party with a gun. When it was over, another 16-year old was dead. Jerome ended up arrested and charged. He spent twenty years in jail until it all unraveled. The two so-called witnesses recanted, saying that their testimony, which fingered Jerome, was coerced by the police. Jerome was released from jail on bond. The current district attorney, Leon Cannizzaro, has Jerome back in court trying to recharge him for the crime and threatening to also charge the two witnesses with perjury. The judge who released Jerome says without the witnesses, the police have nothing in the case against Jerome, since the gun was also never found. Cannizzaro was the original judge on the Jerome case and was allowed under Louisiana law to sentence Jerome as a juvenile to a life sentence without the possibility of parole.

The case is complex. Justice & Beyond, has taken it on, and seems to have won an evidentiary hearing previously denied. Their protests and disciplined demonstrations are making a difference to the elected judges hearing the case. I won’t get off message here and talk about the stark contrasts between the struggle for justice being waged for Jerome Morgan compared to the queue of prisoners, also too young and invariably African-American, that is over populating the New Orleans courts and policing regime. The continual struggle to protect “the body” against racism is currently better handled in the powerful and passionate award-winning book by Ta-Nehisi Coates, Between the World and Me.

Throwing guns into the cauldron of our cities and culture and allowing them to be accessible, perhaps even available, to kids though is a simple story no matter how complex and twisted the path to justice. There is nothing but tragedy and pain in their wake. The smoke never clears. The blood and tears never dry.