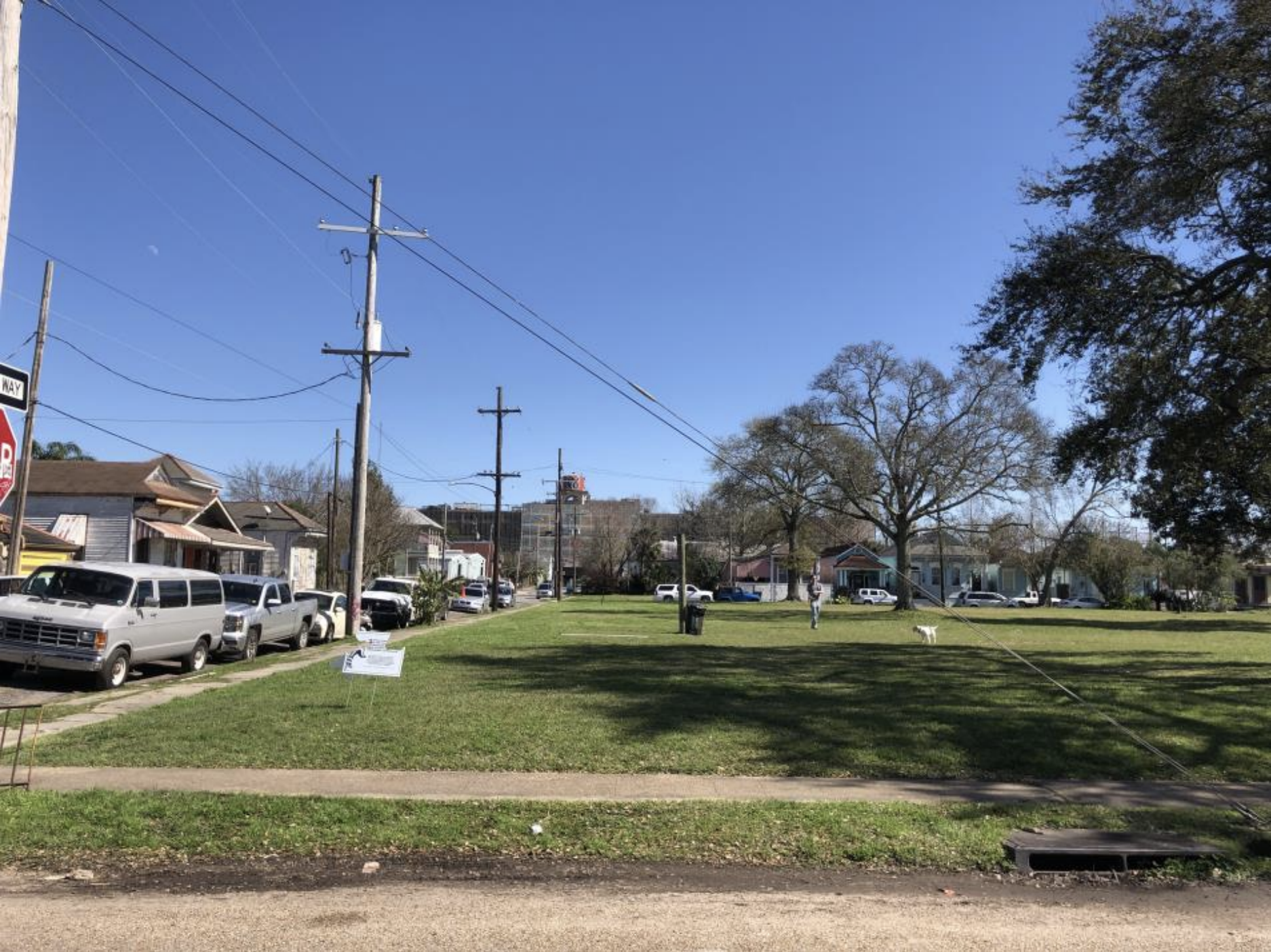 Public Housing site in the Bywater

New Orleans         People were out in force in the Holy Angels meeting space in my neighborhood of Bywater in New Orleans.  I got there ten minutes after the announced starting time, and it was standing room only.  The convener said they had one-hundred explanatory packets laid out on table tops, but they clearly had run out of them by a long margin.  What in the world would bring out such a crowd on an spring, Monday evening in the neighborhood?  You might be able to guess, but I’ll give you the answer anyway:  public housing is coming back!

A big lot of about two acres in the neighborhood near the Mississippi River and only blocks from the Industrial Canal is owned by the Housing Authority of New Orleans (HANO) and has been for quite a while.  Public housing had been there for years but like so much of public housing, the units were caught in the post-Katrina reconstruction of the city, despite the fact that in Bywater these units, like so many other public housing units did not flood.

HANO had finally gotten its act together to make a proposal joined with a private developer as has become the fashion.  There would be 136 units with a 60-40 split of affordable one, two, and three-bedroom apartments, or 82 units that would be affordable compared to 54 units at market rents, which in Bywater have been soaring.

A recent study by a local housing research group found that rents have increased throughout the city of New Orleans by 49% since 2000, while incomes have fallen by 8%.  Yes, you heard that correctly, fallen by 8%.  Bywater did not flood during Katrina since it sits on relatively high ground, being so close to the Mississippi River that the ground has been built up about eight feet or more thanks to the historic alluvial flood plain.  Near downtown and the French Quarter with predominately what Orleanians call shotgun houses or others might see as duplexes, the neighborhood has become “hot” in real estate terms.  Rents doubled after Katrina and housing prices per square foot have been steadily rising.  In another hallmark of gentrification, in the decade since Katrina this previously working-class neighborhood went from being about one-third white to flipping where whites are now two-thirds and African-Americans, Latinos, and others are hanging onto a third.

In short, the city and neighborhood desperately need affordable rental units!  We needed the entire project to be affordable in fact.  Instead, one of the small neighborhood groups has been hollering that it wanted the split to reverse so that at most only 56 units would be affordable with the whole size of the project reduced.  The former industrial area and project they claimed was now going to be too tall at four stories, even though the former F. Edward Herbert federal complex towers over that area only blocks away as do the cruise ships docked nearby.  They also argued that they wanted more green space, even though that section of the neighborhood is only a few blocks from the relatively new and completely underutilized Crescent Park running along the river, making it obvious that their arguments were specious.

The Planning Commission recommended approval, and though the local council person had seemed to be wavering in the face of this small minority of neighbors, at the hearing she seemed to have a stiffer backbone.  The meeting was billed by the television newscasters as neighbors protesting, but in fact the meeting was a full-throated explanation and defense of the project.  There is still a Council vote to come, but at this point the last gasp hope of the anti’s for a zoning defense seems nothing more than a mask for their real feelings, even though for the rest of us it is hard to feel happy on the verge of a win when it is such a half-loaf compared to what is needed to maintain diversity of class and race against the gentry’s rising tide. New Orleans      At first this idea may sound really, really stupid.  Ben Carson, the secretary of Housing and Urban Development (HUD) responsible for financing the public housing and housing subsidy vouchers across the country has announced a plan in his words, “to give poor people a way out of poverty.”  His plan to achieve this is to raise the rent required to live in public housing.  His idea is that being forced to pay more rent will somehow force poor families to get out of poverty by making them work harder.  Somehow in his logic, paying more rent, thereby making a poor family poorer, will somehow make them richer.  So, if at first this idea sounds really, really stupid, once you really think about it for even a minute, it is difficult not to conclude that in fact this idea is in fact, really, really, really stupid.

A report from the DC-based research outfit, the Center for Budget and Policy Priorities done for the Associated Press found that in the 100 largest US metropolitan areas, lower income tenants would have to pony up an average of about 20% more for their rent.  This huge bite into lower income and working families’ income would impact four million people and raise revenue for HUD by $3.2 billion once fully implemented.  The Center found that 75% of the increase would be born by working families, the elderly, and the disabled.  I hope your following me closely.  Working families would pay more which would be an obstacle to their security and exiting poverty.  The elderly would pay more with most of them on fixed income facing an increase disproportionate to any inflation adjustment.  You get the picture.  What’s more the Carson Get-Out-of-Poverty-Through-Higher-Rent plan would also eliminate deductions from income calculations that have prevailed in situations where there were high medical bills or child care costs.

Looking at the Center’s state by state chart of families impacted there’s only one thing that one can say about this without any fear of correction:  this is an equal opportunity program since everyone in all states gets screwed.  Let’s just pull a couple out of the pile.  In Arkansas 45,000 families will be affected that include a total of over 89,000 individuals, including children obviously who account for 39,000 of that number, almost half.   13,000 elderly will have to come up with more money and almost 16,000 of the disabled will have to do so as well.  Arkansas isn’t hit as hard as many states.  The average increase will by $670 about $56 per month pushing $30 million collectively.   In Louisiana the average rental increase will be close to $800.  In Mississippi, it will be $830 per year, and on and on it goes.

Can families just save more and work a bit harder as Carson and HUD argue?  The AP reporters note that the increases are “about six times greater than the growth in average hourly earnings, putting poor workers at an increased risk of homelessness because wages haven’t kept pace with housing expenses.”  So, the Carson HUD plan will increase rents in order to increase homelessness.

We now have a HUD and its secretary promoting a pro-poverty plan!  America, what a country!