Little Rock       The Service Employees International Union (SEIU) is a great organization and with almost two-million members, the largest in the United States.  Its membership is diverse and anything but an entitled aristocracy of labor for the most part with somewhere between a third to forty percent of its membership home health care workers for example. SEIU’s role in prioritizing new organizing, higher wages for all workers, immigration reform, and healthcare protection for all have been critical for decades.  I’m biased, I confess.  Our local union was part of SEIU for twenty-five years, and I served on the International union’s executive board for eight of those years and was fortunate to run big organizing campaigns with their banner for public and lower-waged workers, Southern workers, Walmart workers, and hospitality workers along with living wage campaigns with their resources and support.

SEIU believes in welding politics to organizing.  It’s been a key to many of their greatest organizing victories.  SEIU’s president’s remarks were recently reported on the benchmarks they were outlining for candidates to receive their support.  When Mary Kay Henry speaks, it’s worth paying attention, and I listen carefully.  The article reported,

The Service Employees International Union says to win its endorsement, Democrats must pass a “litmus test” that includes supporting industry-wide bargaining and ending the National Labor Relations Act’s preemption of local and state laws. The union also says it will only back a candidate who includes collective bargaining rights in any major economic proposals and ensure that every job funded by a federal contract or grant provides a $15 minimum wage and union rights.

Affixing collective bargaining rights to “major economic proposals” and mandating – and funding – a $15 per hour minimum wage on federal contracts and grants:  right on!  Sign us up!!

Ending preemption of the NLRA of local and state laws?  What’s up with that?  On just the practical level, that seems a mountain to climb not only for the union but for any candidates.  It would mean amending the constitution, which is near the top of the current list of impossible political acts.

Article 6, Paragraph 2 of the U.S. Constitution states that the laws of the United States — federal laws — are the supreme law of the land and judges in every state are bound by them regardless of conflicting state laws.

So, no worries, this isn’t going to happen, so we shouldn’t lose sleep over it perhaps.  But, why is SEIU demanding this?

Sadly, I think it is a huge flashing neon light that SEIU, despite being the nation’s largest union, has decided at a fundamental level NOT to be a national union.  At the turn of this century, its ambition was not to be bicoastal, with the bulk of its membership clustered around the East and West Coasts and a pocket around the Great Lakes, but instead to organize broadly. This new stance seems to signal that it has resigned itself to hunkering down where it still has some power, especially political power, and can push through more favorable labor laws in places like California, New York, and a couple of other states, and let the tens of millions of workers elsewhere fend for themselves.  The number of states under hard-right Republican control, especially, in the South would seize the end of preemption like the Holy Grail and institute a regime for workers and everyone else the likes of which we have not seen since the Reconstruction.  And, not just the South as we know from rollbacks of workers’ rights in Wisconsin, Michigan, and Ohio.  A call for an end to preemption is not simply SEIU raising a white flag in the fight for all workers, but fundamentally throwing in the towel.

The other sign of SEIU drawing its wagons in a tight circle around the members it wants to protect, rather than all the workers it once sought to represent, is also the call for industry-wide bargaining.  In and of itself that’s not a bad thing.  It guarantees all workers a better deal by narrowing the gap between the unionized and non-unionized by establishing minimum standards.  In some ways though its an organizing paradox.  It might be good for workers, but bad for their unions, because in bringing the bottom up, it also lowers some of the incentives and benefits of unionization for the members, justifying the risks.  There are good cases in Scandinavian countries where the social contract to some degree still exists and unions have been institutionalized in various triparty agreements including business and government, but union density in some of the European countries, or even Quebec where this is possible, is not necessarily greater.  It settles the fight, more than it delivers justice and reward.  Again, this seems to be a survival strategy for SEIU and not an organizing strategy.  SEIU seems to be signaling that it wants to make a deal while it still has some strength in some industrial pockets and attempt to leverage something industry-wide.  In other sectors, like healthcare, where it has a lot of members in some markets, but fewer in others, SEIU seems to be saying it doesn’t believe it can organize the industry and therefore hold on to its position without industry-wide bargaining and agreements that put concrete on the floor with governmental guarantees.

SEIU is not the canary in the American organizing coal mine, it’s the Big Bad John of labor to take the refrain from the old song and “a mountain of a man.”  If this is the litmus test its issuing to politicians about the state of labor at the top, it’s also a bulletin expressing the fears of all institutional labor.

Unions are membership organizations.  They have a responsibility to protect these members.  No argument there, but we may be hearing in SEIU’s message the end of their belief that they can either organize the unorganized or will continue to seek to represent and advocate for all workers.  If so, we’re all on our own, and the devil will take the hindmost. 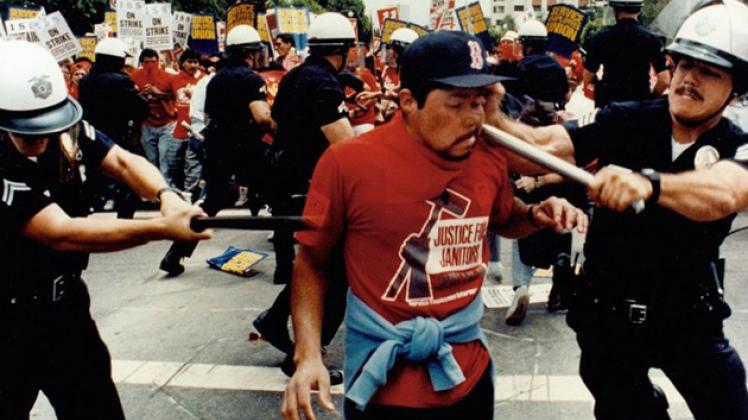 Police Brutality at the LA Justice for Janitors Strike in 1990

New Orleans        Talking with Peter Olney, a friend as well as a veteran labor organizer and former organizing director of the west coast based International Longshore and Warehouse Union (ILWU) where he retired in recent years, on Wade’s World was an important reminder of huge lessons we had both learned the hard way, but are cautionary tales for any and all efforts to organize, as well things worth remembering for any hopes to rebuild the strength of the labor movement.

One theme Peter underlined in our conversation was a reminder of one of the central lessons from some of the classic Justice for Janitors organizing campaigns directed by Stephen Lerner and a host of organizers within the Service Employees International Union (SEIU), both from their victories and defeats.  The lesson, simply stated, rested on the ability to leverage existing labor and union power in order to win organizing victories.  He cited the key role played in winning the janitors’ strike in Los Angeles in the 1990s played by the large and powerful Local 32BJ and its normally conservative, business union leader, Gus Bevona.  In reaction to police violence against strikers in LA, Bevona sent the message that 32BJ would strike the same companies where they had contracts and shut them down in New York City, forcing them to settle.  Additionally, the labor movement in Los Angeles was united behind the effort and had leverage of its own.

All of these conditions didn’t exist in places like Atlanta where the janitors’ campaign failed, but there are examples in many other big organizing projects as well.  The lack of real labor institutional buy-in and internal resistance from the hotel workers’ union was the Achilles heel of the HOTROC joint organizing campaign I ran in New Orleans.  Similarly, the UFCW’s lukewarm and arms’ length support of the Walmart effort I directed in Florida was also fatal, regardless of the success on the ground in both cases.  Campaigns like the long running McDonalds effort arguably are more imperiled because of the lack of union power anywhere and the failure of leverage to bridge that gap.  Peter felt the more recent OUR Walmart suffered from this as well.

Peter drew another lesson from his time as director of the seminal Los Angeles Manufacturing Action Project (LA-MAP) in the mid-1990s that was in some was related.  As organizers we often feel we are in a constant struggle with the labor bureaucrats.  Sometimes the top leadership is also offering more grudging than real support for organizing programs.  Their bread-and-butter is delivering to existing members, while ours is delivering new members.  That’s sometimes an irresolvable tension.  They have to be re-elected based on their ability to prove their case, and our work continues on our ability to deliver the numbers without roiling the base, a dynamite fuse that always seems to be burning without enough distance from the charge.  Peter felt in retrospect that more time and attention to this paradox might have salvaged LA-MAP.

Maybe, but these were all righteous organizing programs that won and deserved support and delivered results.  All union campaigns can’t check the boxes perfectly on leverage, internal and external support, but that doesn’t mean it’s not our job to push and pull them into practice.  Olney is right that we have to do better, but it’s a two-way street now as unions continue to weaken even more precipitously over recent decades and are totally imperiled currently with one reversal after another in labor law protections.  We have to be better organizers for sure, but we need better leaders to support and win these fights as well who are willing to take the short-term risks for the long-term gains and in these times, the survival of unions themselves.