Manchester     A lot changes in eighteen months.  I was in Manchester for the first time as our new chapter of ACORN in the United Kingdom was organizing in July 2018.  I found the city pretty impressive, though didn’t get to see much of it in a quick trip in-and-out between cities.  I fell in love with the Peoples’ History Museum and wished every city was fortunate enough to have such an institution.  We showed “The Organizer” documentary then, moved some Nuts and Bolts, and most of the questions were essentially “What’s to be done with Trump?”

The chapter is now booming with great full-time staff, headed up by Kat Wright, and adding more.  The office is in space run by Partisan, a local art collective, and closet-sized now, reminding me of our longtime space in Edinburgh, which might have been slightly larger to tell the truth for ACORN Scotland, but we’re adding several more rooms, so it will all be different whenever I have the chance to come back.   I got to see more of Manchester moving back and forth on the tram to the office and forging the city to find an eyeglass repair location in a good-sized city center mall.  I was impressed with the number of cooperatives.  The Co-op was a giant supermarket chain with an impressive, glass-encased headquarters building near our office.  There was a cooperative bank with a statute of Robert Owen out front, an early 1800’s inspirer and founder of the cooperative movement.  They seemed to be everywhere.

The idea was that ACORN had grown so much in many of these cities that we should show “The Organizer” again, especially to give newer members an opportunity to watch it, and to ask questions.  This time meeting in a huge Methodist meeting facility, decorated with photographs of the damage the building had sustained in a 1941 German bombing, almost forty people crowded into the meeting room.  We had some last minute drama when the first two or three computers didn’t have a fitting that would connect to the projector, but we were saved by one of the members, and the download was in its last minute when the meeting was called to order right at 6:30 on a misty, foggy and cool evening.  I snuck out next door, so could hear the movie as I worked on the agenda and my report for the Year End / Year Begin meeting that will be waiting for me on my return to the USA, but was back for the Q&A.

This time no one wondered about Trump.  In the aftermath of the recent election called by Prime Minister Boris Johnson, many in the crowd were living their own nightmare now.  There was handwringing about the decline of unions that had provided the firewall for the Labour Party in the north and the concessions with companies and government that had now seen this sorry situation become the new normal.  Having firsthand experience in the campaign with a steady diet of lies and fake news, a number of questions hit squarely on the issue of how to defend their ACORN chapters against the potential assault of similar attacks from trolls and Fox News types now proliferating in Britain.  Concerns were expressed that the defeat in the election was so dismal that it could mean five to ten years of Conservative Party rule, austerity, and further destruction of what remained of the National Health Service and the British safety net.  Where our work centered on tenants and housing in the UK, one person asked whether housing was likely to be sustainable as a centerpiece of our work.

The worry beads were out everywhere, even as the enthusiasm and commitment of our members was soaring and they braced to meet the future.  The big change is that the horror many had seen in Trump a year-and-a-half ago, had now found fertile soil in Britain, and people were looking for answers to meet the challenge now on the home front.

Oxford   Having breakfast at the University of Memphis before leaving for Oxford, Mississippi, home of the University of Mississippi, we were in a good mood after the Hooks Institute event the previous evening.  We laughed at the number of people in the audience that evening who had raised their eyebrows when we had told them we were headed there after they had inquired on whether or not we might be available in Memphis the following day.  Reputations obviously die hard. 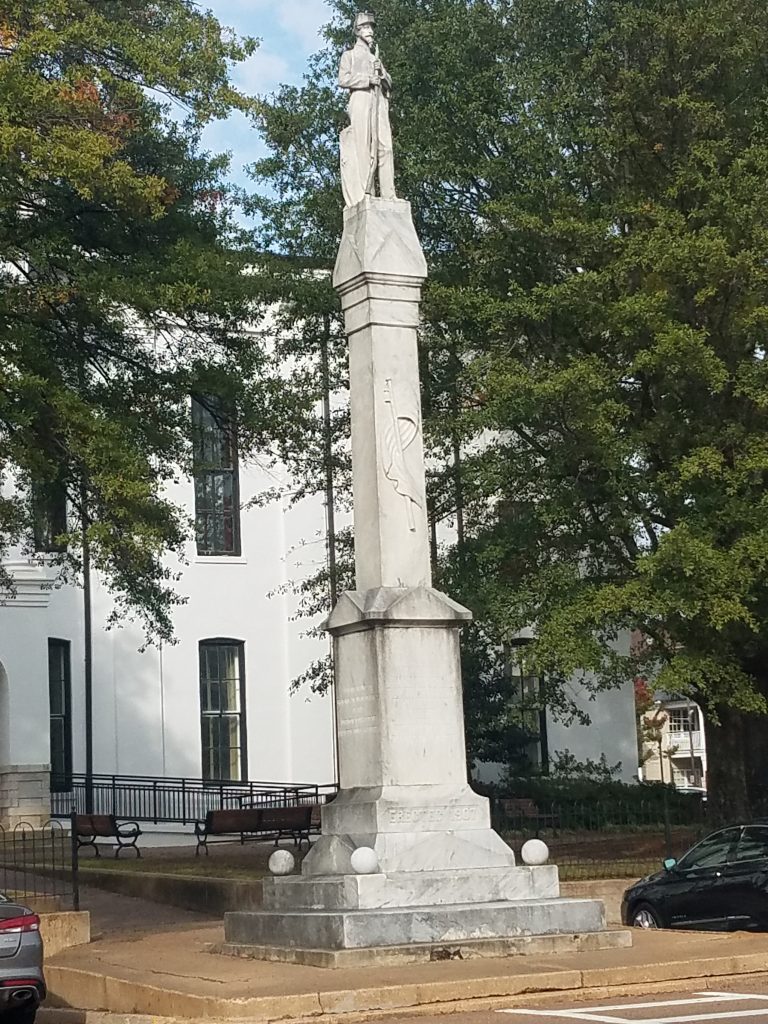 Walking around the well-known town square in Oxford later that afternoon, we could understand the point some of our new friends had made somewhat better.  A statue of a Confederate infantry soldier towered over the square in front of the courthouse dwarfing the signature store of the famous Square Books, whose locations dot many points of the compass there.  William Faulkner dominates a floor of that bookstore.  Continue walking and a bronzed statute of him sitting on a bench with a pipe looks at the courthouse as well.  The famous saying that the past is never past is not his, but it seemed appropriate in a town dominated by a publicly funded state university still proud to call themselves the rebels. 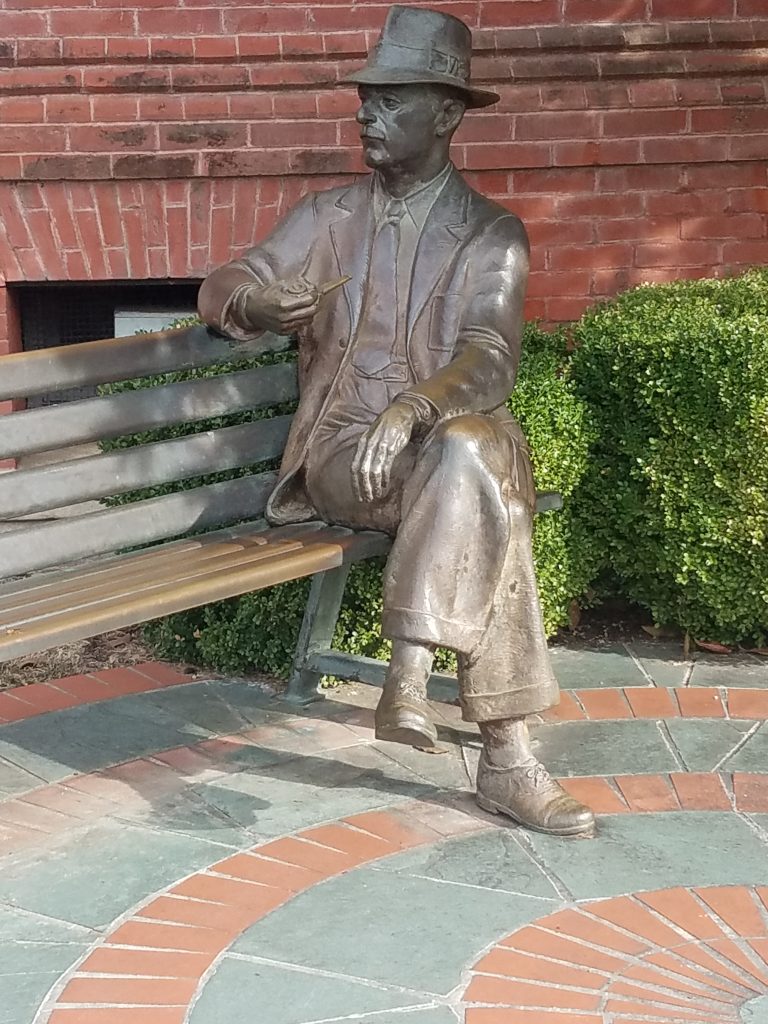 We were there at the invitation of former ACORN organizer from the 1970’s and now Professor of Social Work there, Steve Soifer.  Steve had been corresponding with me about showing the documentary, “The Organizer,” and talking about organizing whenever I might be close by, and I had mentioned we were going to be in Memphis not far away.  He had arranged for several of his undergraduate classes to screen the documentary in two-parts, one in the morning session and another in the early afternoon, and we made it there in time for the Q&A.  The students were surprised somewhat that I had been as young as they were now when I started ACORN.  Others hailing from the Gulf Coast area were curious about the Katrina recovery area. They were most animated when Steve asked them to describe their class projects to me.  The most intense conversation erupted when the question arose about diversity of the Ole Miss campus itself.  The student body is now 13.5% African-American, while the state is closer to 38% African-American.  It was hard to escape the point one student was making:  it was better, but nowhere near good enough.

In the evening the screening attracted people from the community as well as a bunch of graduate students and some undergrads from other disciplines.  This group was hungrier in its efforts to sort out ways to make a difference in these difficult times.  They didn’t want answers as much as they wanted me to suggest directions they might go.  I spent a long time talking to one activist student on the verge of graduating who seemed to have caught a bit of the organizing bug, and might hideaway in graduate school, but I could tell might as easily jump into organizing, making the journey to Oxford just about worth my while, if there had been no other benefit to be gained from the visit.

As the questions ended, I asked one older gentleman I had met before the screening if he didn’t have any final question.  He commented that he knew as you got older you were supposed to become more conservative, but in these times, he didn’t find that, he said was getting more radical.  I said, “Amen to that!”, and added, “…and more impatient, too!”