New Orleans      Since 1975, I’ve been on the road, one way or another, pedal to the metal or wheels up, anywhere between one-third and more than a half of the year.  I always make a mental note of the final trips as hallmarks of making it through another year, safe and somewhat sound.  It’s a small personal tradition, meaning little to anyone but me.

My last flight was from a cold and snowy Quebec City to Newark to New Orleans and its brand-new airport.  The crews were plowing and salting the light snow on the Quebec runways for hours, but initially we were greeted with an air traffic delay that made catching the last flight from Newark to New Orleans a dicey proposition.  Eventually, the delay was reduced by a half-hour.  In the small plane, more than thirty of us were told by United Express to gate-check our bags to pick up on the runway when we hit New Jersey, so we didn’t have to wait in baggage delaying our run through Customs.  Landing with our eyes on the clock, we crowded around until a big baggage handler came up the stairway and announced that on an international flight they could off load on the ramp, everything had to go to baggage claim.  They piddled around calling to confirm.  The pilot and the crew came on the runway, and he lamely offered that he had only flown from Canada to Newark twice before, so wasn’t sure how it worked.  It wall worked out, but it was bad travel karma for a last flight.

Running the roads on my regular route from New Orleans and back with stops in Arkansas and towns in the Mississippi Delta like Greenville and Drew was smoother, and my mental notes were different.

I could go on and on, but making this trip year in and year out for years, some commonplace things become landmarks, traditions, old friends, and constant curiosities.  Another year on the road passes, but from my window in my gray, Colorado pickup, I mark the calendar for another year of travel, still fascinated by the lives I see passing by me and wondering about the mysteries and magic they might tell, and imagining that someday, maybe next year, I’ll stop for awhile and find out the answers to these puzzles and hear their stories.

Katmandu       Bells were jingling at 5 AM.  My window opened to a street that abutted a pond where a Hindu prayer space sat in the middle and on the other end were Buddhist stupas.  Were the bells a kind of call to prayer or a melodious bicycle moving in the early morning to work?  I’ll never know.

I was in the Patan district, an older section, of Katmandu.  Waking up from time to time with jet lag, the city seemed so quiet.  Other times the silence was pierced by dogs barking, singly and in packs, perhaps below me or maybe a kilometer away.  I knew I was in Katmandu, but it felt like India, except when I listened to the different language cadences.  I could be fooled though.  Everyone understood the Hindi that my colleagues spoke.  Indian rupees were taken as freely as Nepalese rupees.  The fast food shops served roti.  Signs advertised tandoori. 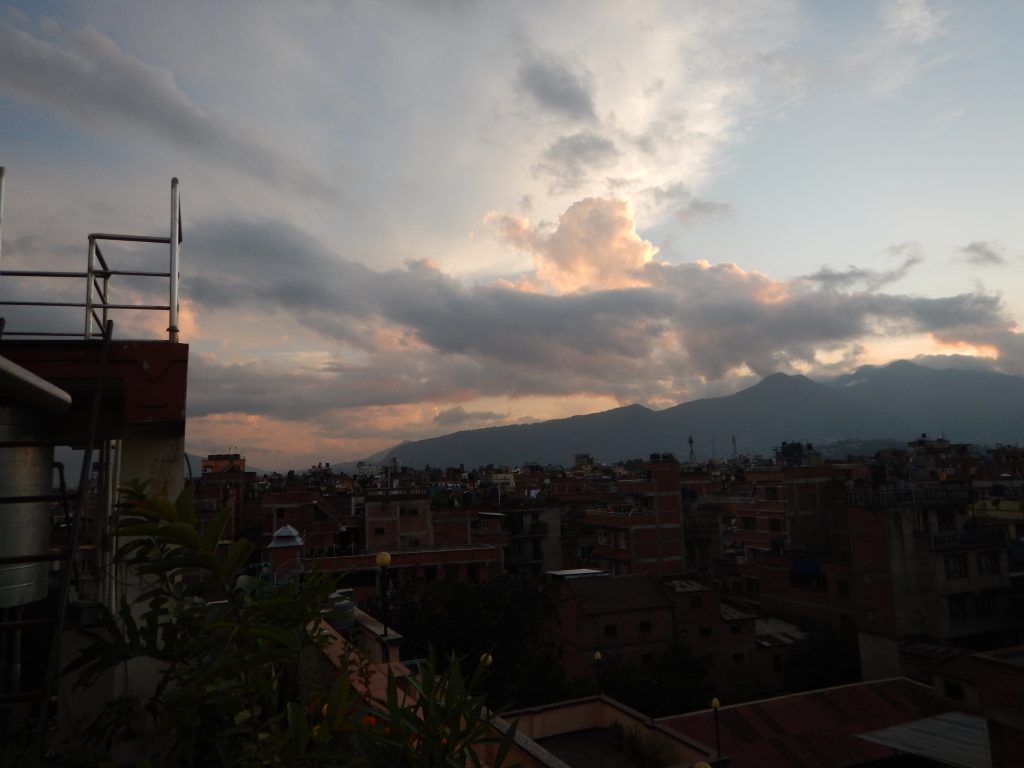 I knew I wasn’t in India, since I had been unable to renew my 10-year Indian visa successfully for the last three years.  Renewal in the time of Prime Minister Narenda Modi and the BJP, the rightwing communalist party, ruling on a hyper-nationalist, anti-Muslim agenda, made it seem like politics, given his attack on nonprofits and any foreign ties, other than the ones worn by his buddy, President Trump, but it could have as easily been incompetence since he privatized the visa process and had taken it out of the hands of consulates in the USA.  (Listen to Wade’s World where Vinod Shetty and Suresh Kadashan talk about India under Modi). Katmandu had not been on any sort of list of places we sought to organize or had short listed to visit, but when violence and unrest wracked Sri Lanka, where we had planned to all meet with the Organizers’ Forum, it became the alternative location where I might be able to meet for several days with the principal organizers of ACORN India in Delhi, Mumbai, and Bengaluru. 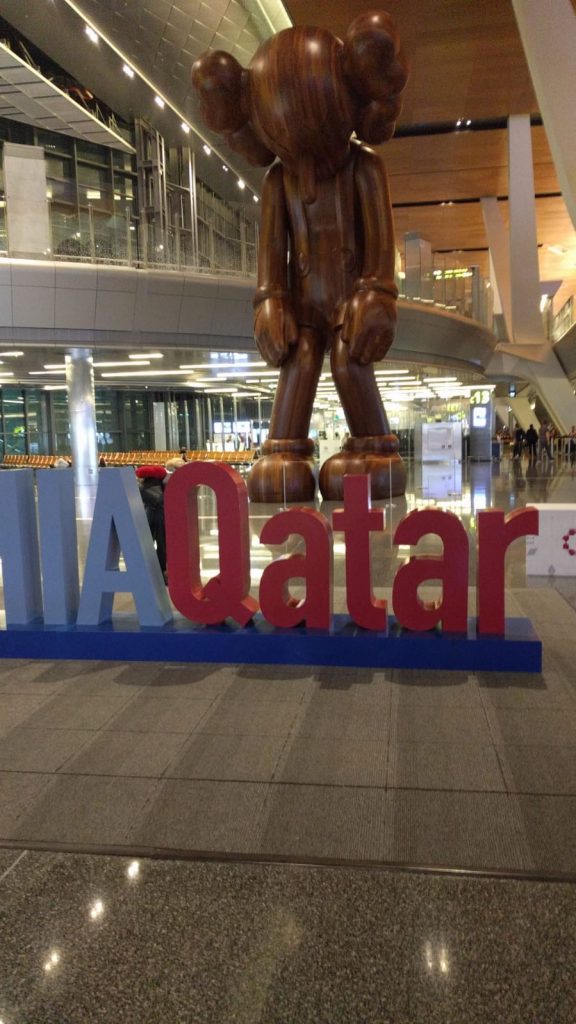 Bob Seger and his 1975 song was ringing in my ears on my journey to meet the ACORN India team.  Some may not remember parts of the song where he sang,

Take my word, I didn’t remember every word of the song either, but I lived that song, and it was in my head thanks to Qatar Airways. 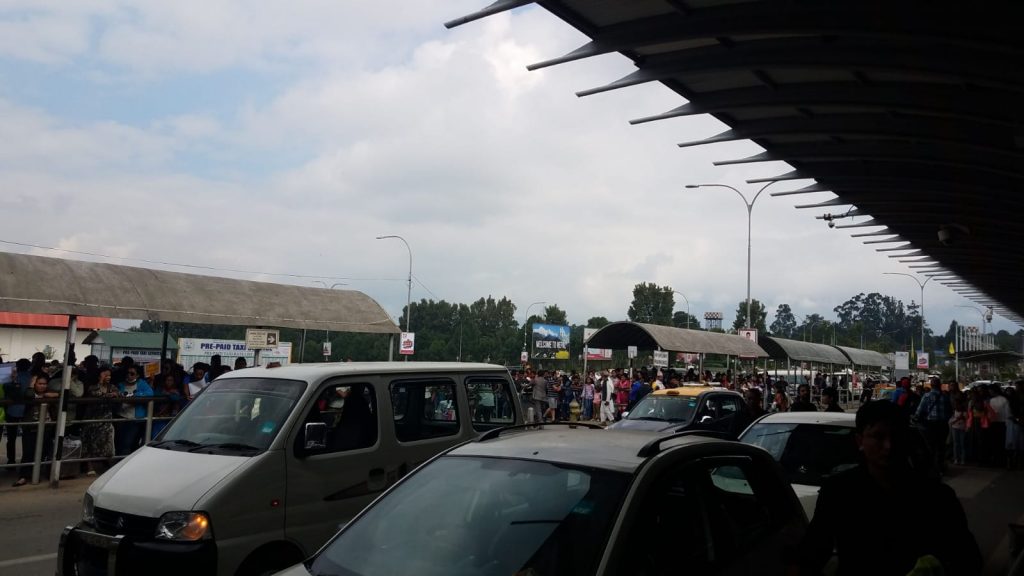 My trip had started well enough.  Jet Blue got me squared away to JFK.  I boarded Qatar Airways to their hub in Doha, and all was well until arriving at their five-year-old, $17 billion-dollar airport.  My flight reservation, booked through Expedia, had me leaving at 5:15 PM and landing at 1AM, so I had about an hour to make the plane, so I needed to hustle.  There was nothing on the departure board at all.  A security guard pointed out the information desk.  They couldn’t have been more helpful as they told me for the first time that, no, my flight left in eight hours at 12:40 AM and didn’t arrive until 8:15 AM!  As Seger sang,

It doesn’t end there.  Once Qatar spent $17B with six years of overruns on their airport mall monstrosity with its wide and nearly empty concourses, it seems determined to make Doha the Bermuda triangle of air travel.  They sent me a note Friday night in Katmandu telling me they had also unilaterally changed my flight time from 2AM Monday morning to 8:50 PM Sunday evening so that I could land in Doha at 11:45 and spent the night walking through desolation row at Hamad International Airport.

Make that more of a travel warning, than a travel tip. 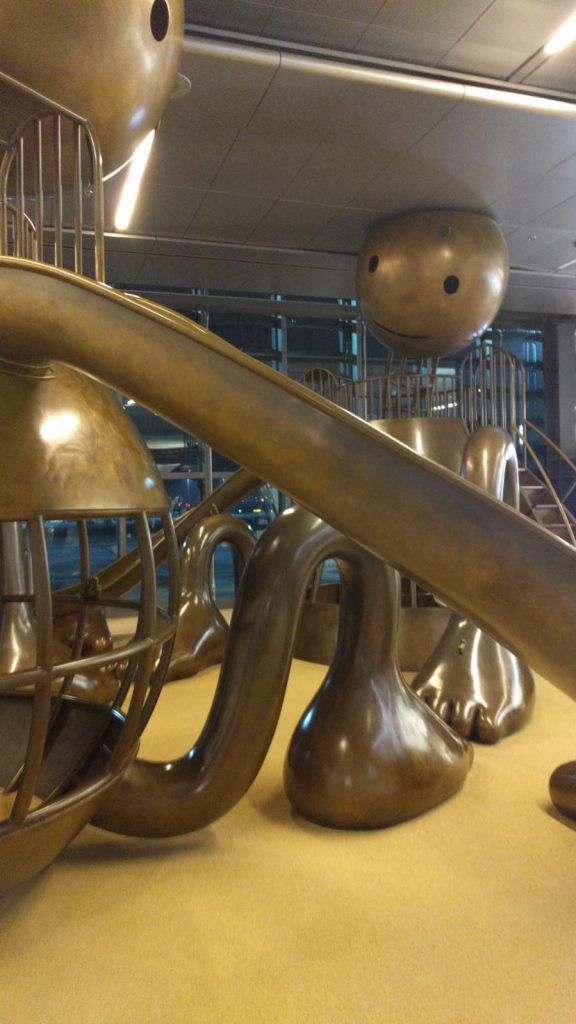