Los Angeles: On Sunday 1500 ACORN members rendezvoused at famous MacArthur Park near downtown Los Angeles.  Pouring off the busses and standing under the small shade of the trees, breeze blowing, and a score of ice cream carts jingling into action, it seemed like a very, very large and relaxed picnic and park crew enjoying the afternoon.

But instead this was serious business for a Sunday.  Up the hill from the park a short way was the Daughters of Charity’s St. Vincent Hospital, a nice, clean modern facility looking down from the rise on Pico Union and the lower income neighborhoods that are a shout away from MacArthur Park.  There was a disconnect here.  Daughters of Charity and ACORN with its huge lower income membership should have been a natural partnership not a two forces at odds on a pretty Sunday afternoon.

But, St. Vincent’s Medical Center unfortunately is not in compliance with the law and denies service to uninsured and routinely dumps such patients on other hospitals, despite its non-profit and favorable tax service requiring the same kind of charity that the Daughters have affixed to their name.  Routine calls – anyone can make them – to the hospital were as routinely referred to other area hospitals once the caller indicated that the prospective and needy patient was uninsured.  Oh, and forget about whether or not in a community like Los Angeles – and many others – there is any offering for the vast mass of callers speaking Spanish to receive translation or any access to service.  Haughty on the hill!

The Los Angeles Times quoted Dee Dee Ferro, an ACORN member from Bay Point, California stating the basic question as she shouted to her fellow ACORN members:  “I want to know, where is their charity?”  Indeed!

The hospital conceded that there was no disruption of health care as members from around the country served notice on this hospital and many more to come that they have had enough of both law breakers and hospitals that do not serve those that need the care despite their status.  Several ACORN organizations in various cities like Providence, Baton Rouge, Albuquerque, Chicago, and others have already joined in this effort with particular facilities. It means something special though for this to be a centerpiece action of the national ACORN Convention as thousands marched up the hill to the Daughters of Charity facility under flags moving in the breeze, the sound of chants, and the loudspeakers of the brand new ACORN Mobile Action Centers.

Access to healthcare is becoming a signature ACORN campaign, and attention must be paid! 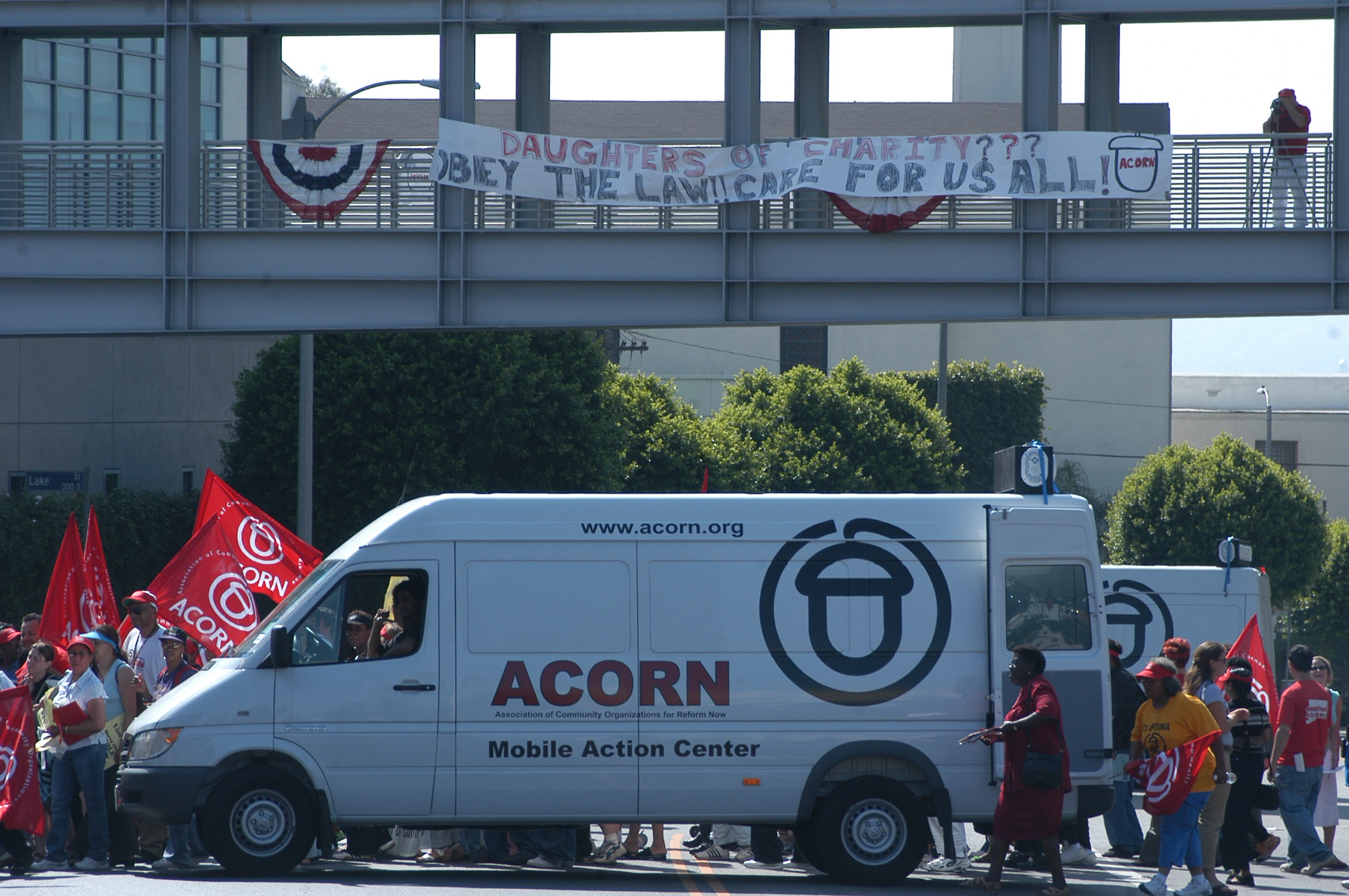 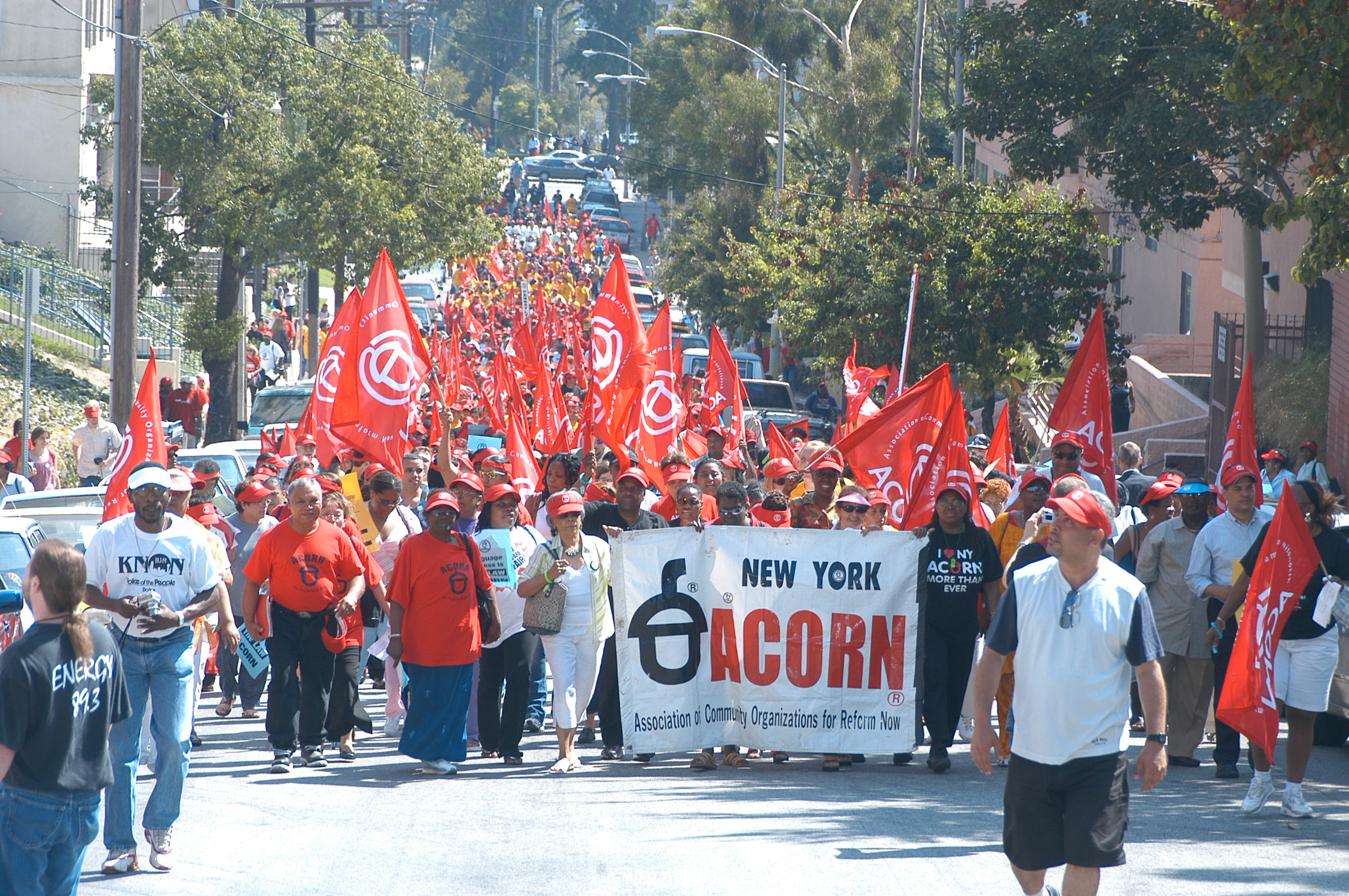 Los Angeles Every two years ACORN has a national convention.  The members love it!  They also pay almost all the freight, so attention must be paid!

ACORN has held conventions since 1978.  There was a brief spell of insanity when we met in 1978, then 1979, and again in 1980 before we came to our senses and started meeting every other year.  This 15th Convention is the first time we have ventured west in twenty years since 1984 when we camped on the banks of the Trinity River in Dallas in over 100 degree temperature in a “Reagan Ranch” to protest the re-nomination of Reagan for a 2nd term.

Now we are in Los Angeles.  The members were excited to come — this will be our biggest convention with 2200+ people ready to roll.  The convention will be in Pauley Pavilion on the UCLA campus, which is a beautiful venue, though, unfortunately a bit hilly for some of our troops.  Everything about the logistics of Los Angeles is a nightmare, and since half of the members flew from around the country, we have the added complications of doing the actions, sending our message, and then also navigating the traffic out of downtown Los Angeles and making it to one of the many airports in the area.

Staff has been here in various complements for a week in some cases, so by this point they are moving on raw emotion and what’s left of adrenalin.  There’s still a lot of tedious, hand work — assembling packets, drawing maps, making signs, writing intros, hanging banners, hauling, twisting, tugging everything together.

It’s amazing how much has to be done by so many to support 2200 people dropping from the sky and rolling in on busses.

Proving once again how much of organizing the grand moments lies in the intense repetition of details and skills. 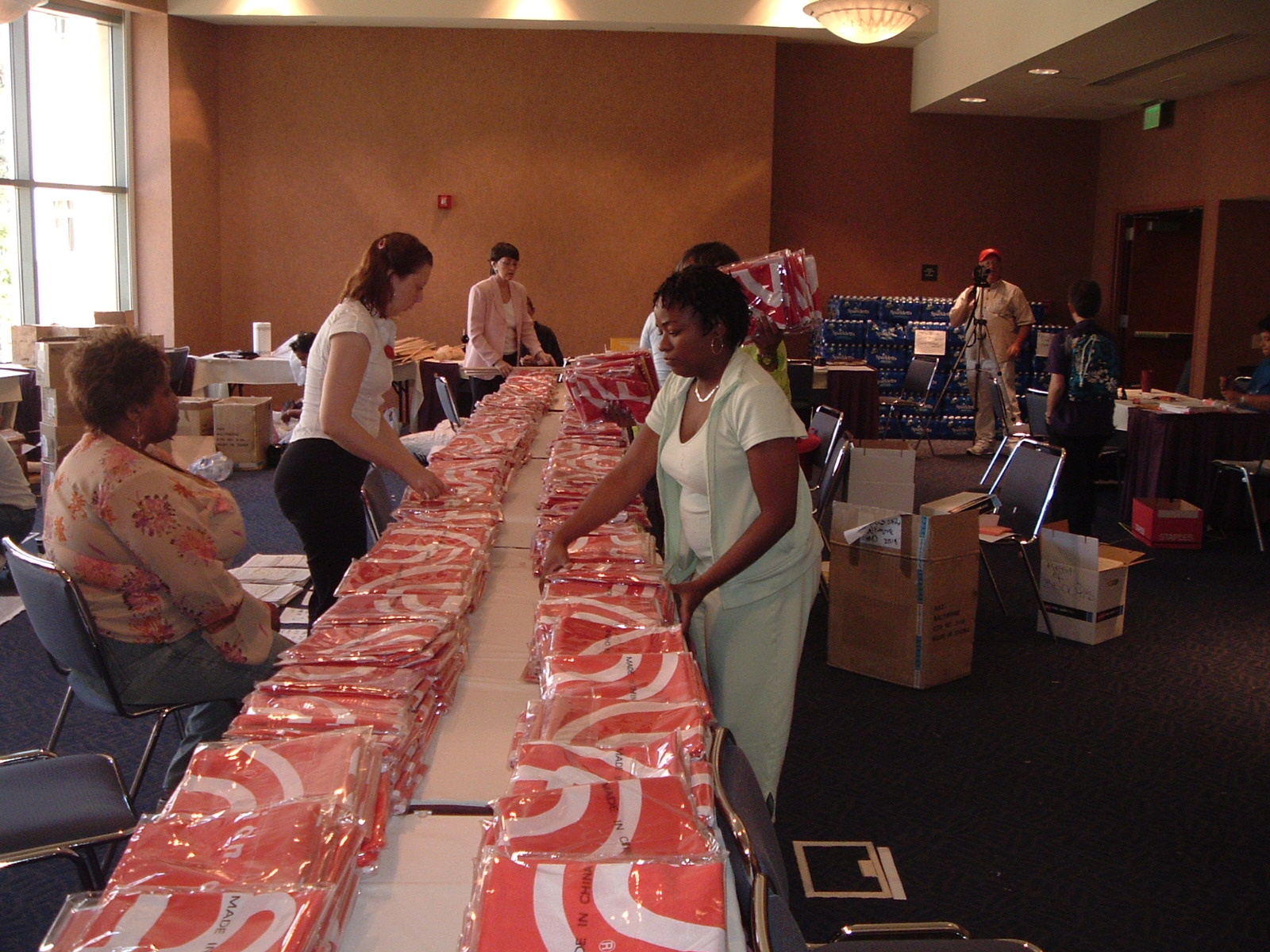 Staff work into the night to prepare for the second day of the ACORN National Convention. 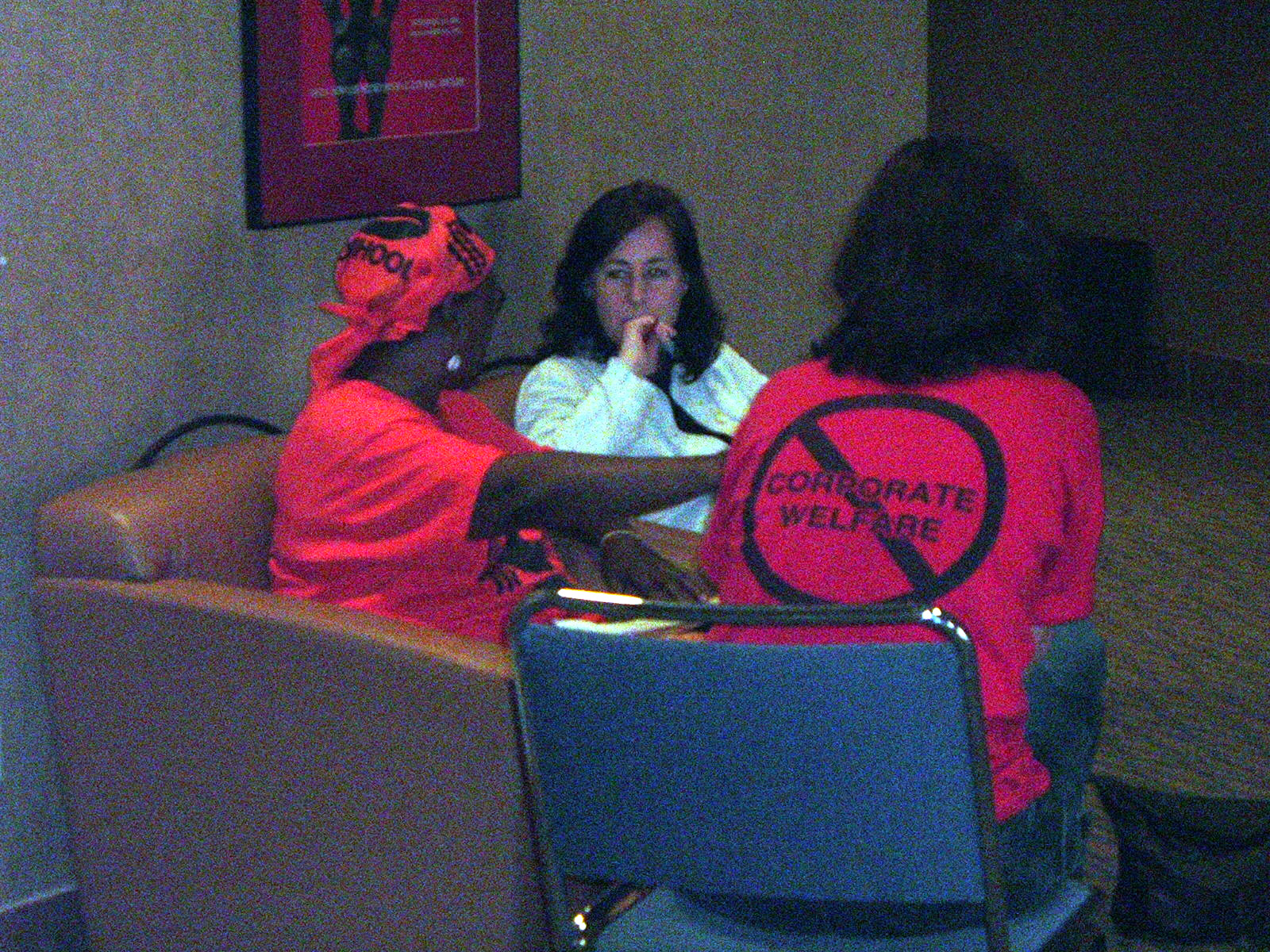 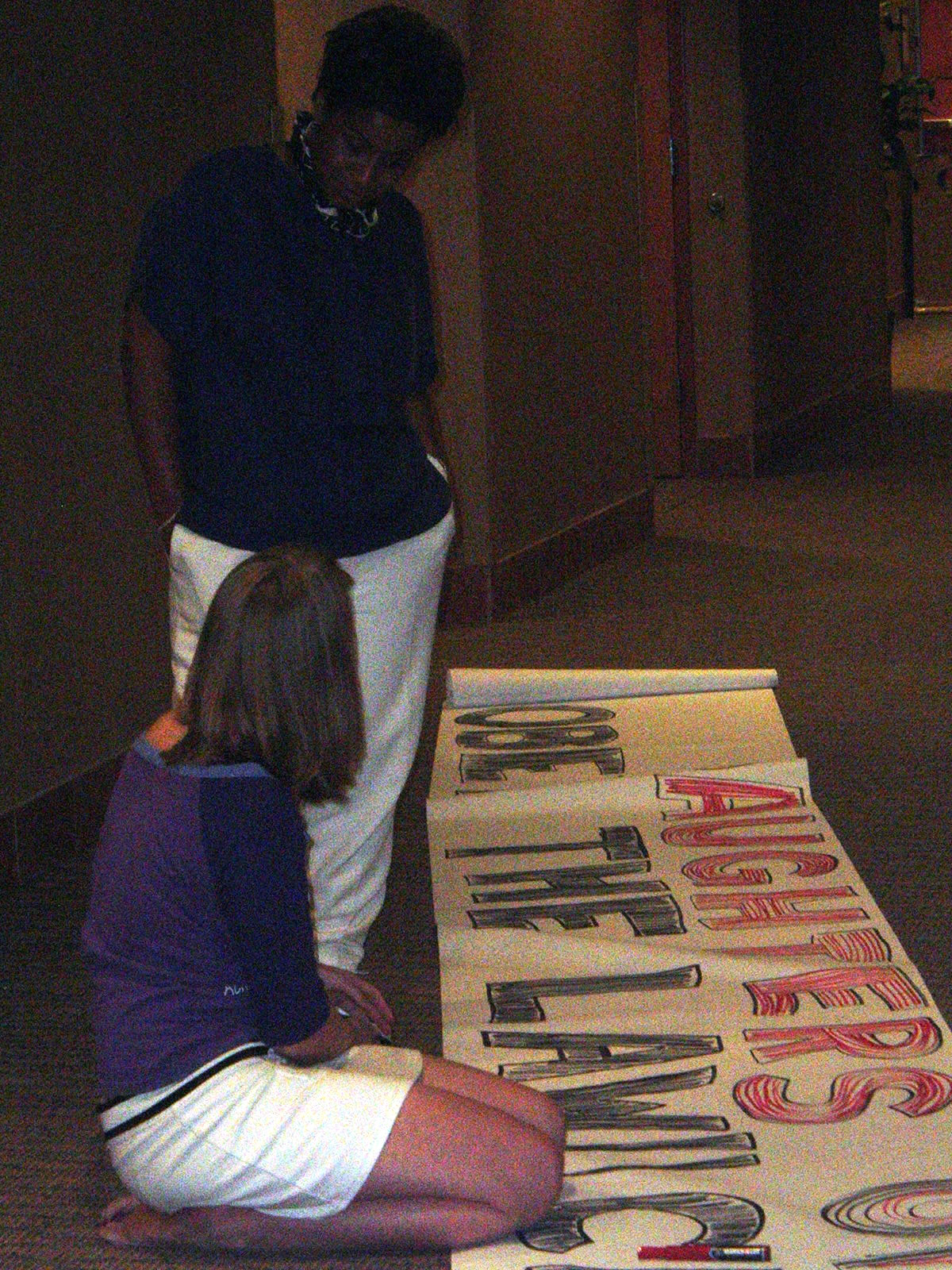 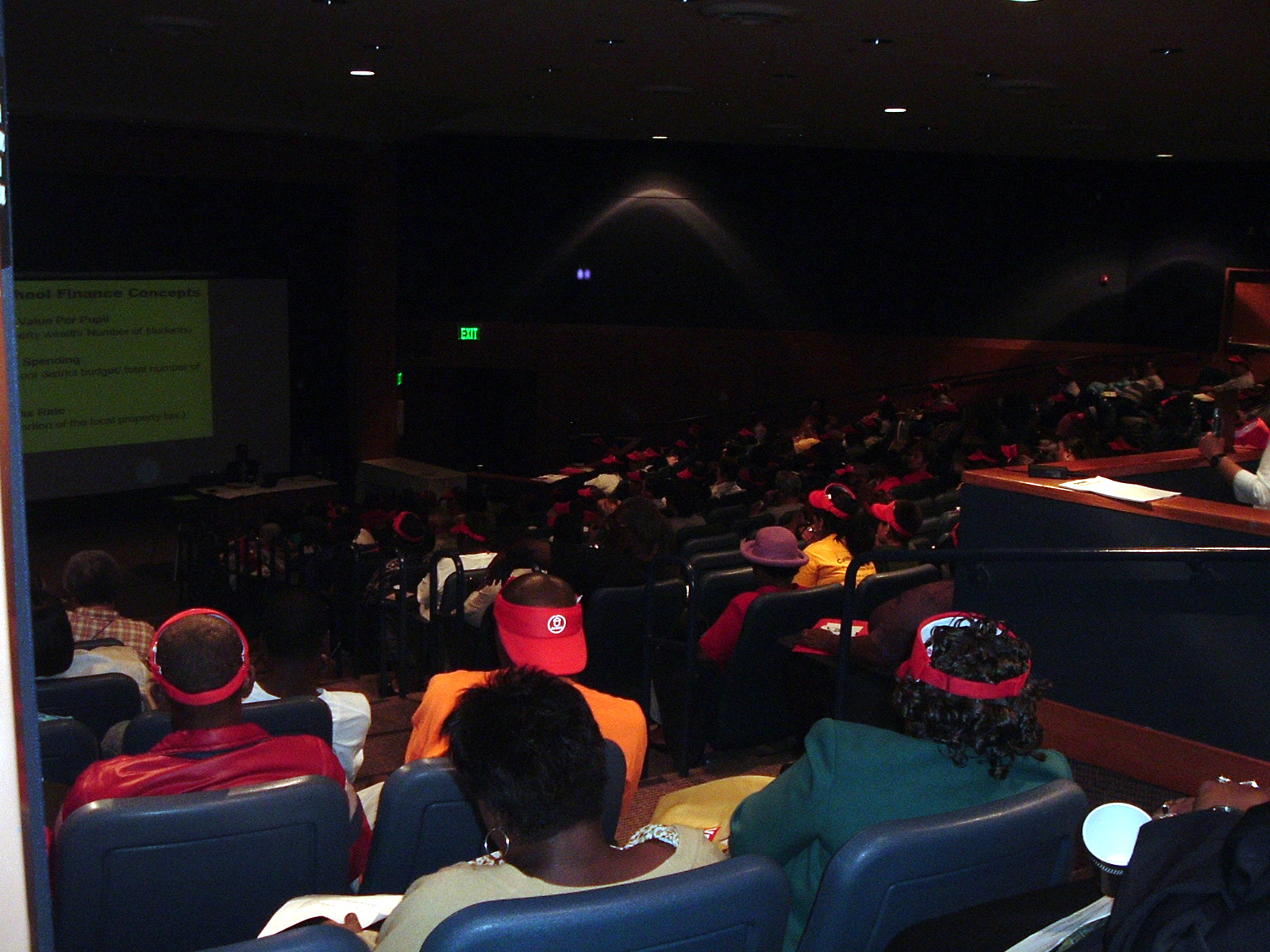