San Francisco:  Somewhere between five and ten thousand people poured out of Crissy Field along the San Francisco Bay to walk the 4.5 mile roundtrip across the Golden Gate Bridge.  This march was largely organized by the Service Employees International Union to coordinate with the SEIU quadrennial convention being held at the same time.

The weather was overcast, cool, and foggy – in other words, typically San Franciscan!  At the apex of the bridge when the wind is whipping straight through the narrows, seemingly all the way down from Alaska, you can be cold no matter what time of year.  SEIU had provided purple windbreakers for all of the members along with hats or berets so that the complaints would be mild, rather than severe.

There was no specific target in this march.  This was not a matter of some company or another having done wrong and being the problem that had to be fixed so that everything would be all right.  This was a situation in which things were badly amiss with healthcare for all Americans and voices needed to be raised about the urgency of this situation.  Healthcare is in crises in the United States, but as far as the White House seems to know its one of those silent screams – loud everywhere, but unheard there.

The idea of “bridging the gap” had turned out to have appeal.  SEIU had initiated thirteen (13) bridge crossings, adding Chicago, New York, and other cities simultaneously to involve others who could not be in San Francisco.  At the end of the day there were reportedly 166 bridge crossings by all numbers of people on all kinds of bridges around the country protesting the inactivity around healthcare.

This is an interesting phenomenon in itself and part of the ongoing experimentation – and excitement – of using internet based organizing to help create a viral impact which builds much more activity than one might have expected possible.  Some of the top internet experts from the now long gone Dean Campaign for President have been working with SEIU and Americans for Healthcare to get more action and it seems to have resonated tactically with many others around the country.  The Bridging the Gap affair was also co-sponsored by Moveon.org, which no doubt also contributed to an ability to get the word out.

Perhaps as interesting was the little media coverage, especially print, received by the marches either in San Francisco or elsewhere around the country.  Except in some of the smallest markets where this was a novelty, the continued cultural confusion and lack of consensus about progressive actions led to an ongoing blockade of news the people around the country.

All of this is an important contribution and challenges.  It seems one can get the word out through the internet, but may not be able increasingly to communicate with others who are not as connected and hardwired into cyber action.   We seem closer than ever to really creating a parallel universe mirroring the other divisions in the world that we have not been able to bridge either. 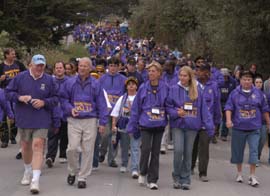 SEIU delegates and others head for the Golden Gate Bridge, marching for healthcare.