Arequipa, Peru: As an organizer, I can not resist asking, everywhere I go around the world, about the economics of social change.   What defines membership in a social movement or labor organization?  Are there dues?  If so, how much do members pay?  Regardless of what many might think, other organizers and leaders are always surprised someone is interested, highly knowledgeable, and delighted to answer.

We were in Arequipa to talk with FENTAP affiliates and allies this city who are beginning to fight against privatization initiatives in the local water system.  There is some guarded optimism about this fight because both labor and its best ally have proven their mettle in earlier, successful fights to block the privatization of electricity only a couple of years ago.  Then they were collectively able to put 50-60,000 members out on the street over and over again until they won.  We were part of a press conference led by FENTAP’s president and the general secretary of the area central labor council, FOTA – the Federation Departamental de Trabajadores de Arequipa, where I got to tell the story of the successful fight led by Local 100 SEIU and ACORN against privatization of water.

This was surprisingly big news with five newspapers, three tv channels, and a host of radio stations in attendance.

Both before and after the press conference in talking with the union leaders we inquired about the issues around capacity.

The newly elected president of FOTA was from the largest union in the area, the Sindicato de Trabajadores en Contruccion Civil de Arequipa – the civil construction union.  He said that his union had 12,000 members, but under closer questioning it developed that only 2000 of them were working, and therefore paying dues.  The dues per member was 8 soles per month, so the income for the entire union was 16,000 soles per month – converted into US dollars, the income would be roughly $4500 per month and roughly $55,000 USD annually for the whole shebang.  This, though, is the biggest and the best, the aristocracy of labor in Arequipa.

FOTA itself turned out to be another story entirely.  Like central labor unions everywhere, including in the United States, affiliation was not mandatory and the dues were low.  So low in fact that each affiliate only needed to pay the FOTA 20 soles per month.  Unfortunately, of the 49 unions that were affiliated, only 12 were actually paying, so our newly elected president of FOTA was starting with an income base of 240 soles per month or $68 USD monthly and roughly $823 per year.  Hard to run a program with these resources at your disposal!

Asking FENTAP the same question as we all commiserated with each other, Lucha indicated that in 2003 the entire national federation had only had 12 of the 52 local unions in Peru affiliated, and only brought in $1000 USD in dues to support the organization that year.  With the increased capacity and support of the Paradox Fund of the Tides Foundation in fighting water privatization, affiliation had now risen to over 40 of the local unions now federated or more than 80% of the possible affiliates now in the fold.  Dues through affiliations had now increased to $500 USD per month and would likely hit at or over $6000 USD for the year.  FENTAP is now fighting water privatization efforts in 13 cities all over Peru, which is not a small country and is very, very difficult to travel easily without resources.  And with everyone almost now straining at the wheel to move the fight forward, they are at best, very hard pressed.

I would draw a number of lessons from all of this.  One would be about the way members are counted in the labor movements around the world.  Their inclusiveness and definitions based on dues and ability to put people on the street and demonstrate support – working or not working – is a lesson for everyone.  Their ability to do so much with so little is also a lesson, but it is also a challenge, since they could do so much more, especially in organizing, with more resources, and this is something that in the first-world blindness which assumes that unions have big resources, too many are missing as they look to support a future in the global South and elsewhere. 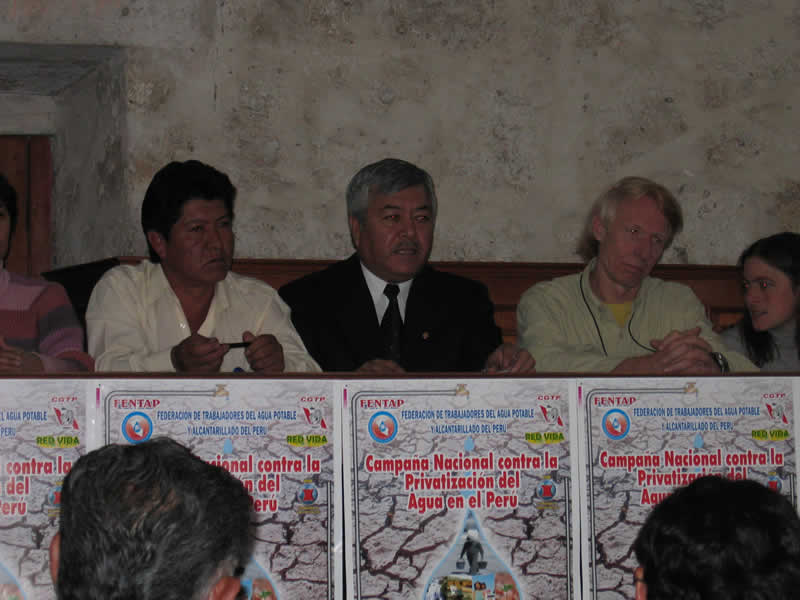 The head of FOTA (the central labor council), the president of FENTAP, Wade Rathke, and Lisa Donner in Arequipa at a press conference opposing privatization of water.