Johannesburg:  The Organizers’ Forum Dialogue on South Africa began right after breakfast as our delegation (crew would seem a better word!) trooped onto a bus to head for Orange Farm, a huge developing township of 800,000 on the outskirts of Johannesburg.  Along the highway as we came into the area we could see the innumerable one-room structures crawling all over the hills and laid out throughout the countryside.  We pulled over on the shoulder of this paved, modern super-highway and met our guides, Reverend Paul Ntshumayelo, and members of his congregation.  I had met Rev. Paul briefly in Milwaukee at the leadership assembly of the Gameliel Foundation along with the Gameliel Director in South Africa, Rev. Terrance Jacob who had arranged this morning’s visit.

First we looked at a new church structure built by the congregants with a sturdy metal roof and cement blocks donated by a church in the U.S.  Interestingly, the church was built on squatted land, just as the residents were.  The new government had a commission which was in the midst of trying to sort out land title to all of these properties and wanted the church to no pay the equivalent of $3000 USD for the land.  It seemed a threat in name only in reality.

The dirt streets were nicely laid out and cleaner and more spacious than I am used to seeing in the crowded urban slums of Lima, Rio, and Mumbai.  There were standpipes for water in close proximity.  There was electricity – much of it with buried lines.  Orange Farm residents had laid carpet or linoleum inside the shacks to keep them cleaner and warmer.  The new ANC government had continued the practice of the apartheid regime of building schools, especially secondary schools, throughout Orange Farm.  Apartheid had been busy about construction and improvement in the townships in order to keep blacks there and out of the cities, while now the ANC government was continuing the programs in order to make the areas more livable.

We then were guests at the Rev. Paul’s church, which was quite an experience for two-and-one-half hours.  The singing was powerful and moving accompanied by a lot of movement and rhythm and without any real instrumentation.  There were “clapping bags” that some of the elders used to generate the beat and folks went from there with enthusiasm.

In a post-NG-obi type experience, we found ourselves to everyone’s surprise being part of a baptismal experience where we were all impressed into duty as faux god-parents in the ceremony, which Rev. Paul quite baldly hoped would build a bridge of remittances to the families.  Our crew handled the experience with grace and good will though that hardly eased the discomfort involved.

The crushing problem of nearly 40% unemployed nationally (28% officially) and higher than that in the townships coupled with the high rate of HIV-AIDS related deaths was mirrored in the congregation as well, so in that sense all was fair game, including politicos from the West, so the shepherd had to look after his flock.  The economics of the church were interesting though as evidenced by the dual collections for both the regular support of the church and the second collection for the communion.  One pot collected over $200 USD equivalent and the other was close to $400 USD – all of which was contributed in coins with no paper money.  The collection system was also interesting and highly effective.  The elders and the church council called out the congregation by sections so that everyone had to sing and dance up to the alter to put their money in the basket.  These were highly public affairs – and effective.

In the way that any and everything around money is freighted with meaning and heavy weight, we listened to the young head of the large church council explain in several languages to the congregation an interesting problem around property.  Seems a house had been held by the diocese and due to out of country donor activity, the house had been donated to the church and come under control of the church council.  The church council was trying to announce that it was now gifting the house to the pastor, Rev. Paul.  This was obviously potentially controversial because the council seemed to want to give the house personally to Rev. Paul regardless of what happened, rather than keeping the property themselves and simply allowing the Rev. Paul to live there, which would have been the usual practice in the USA and elsewhere.  Were we to continue to be guests in this congregation there is no doubt that we would hear a whole lot more, both formally and informally, about this particular transaction.

We had definitely come to South Africa and were now in a curious type of complete cultural immersion. 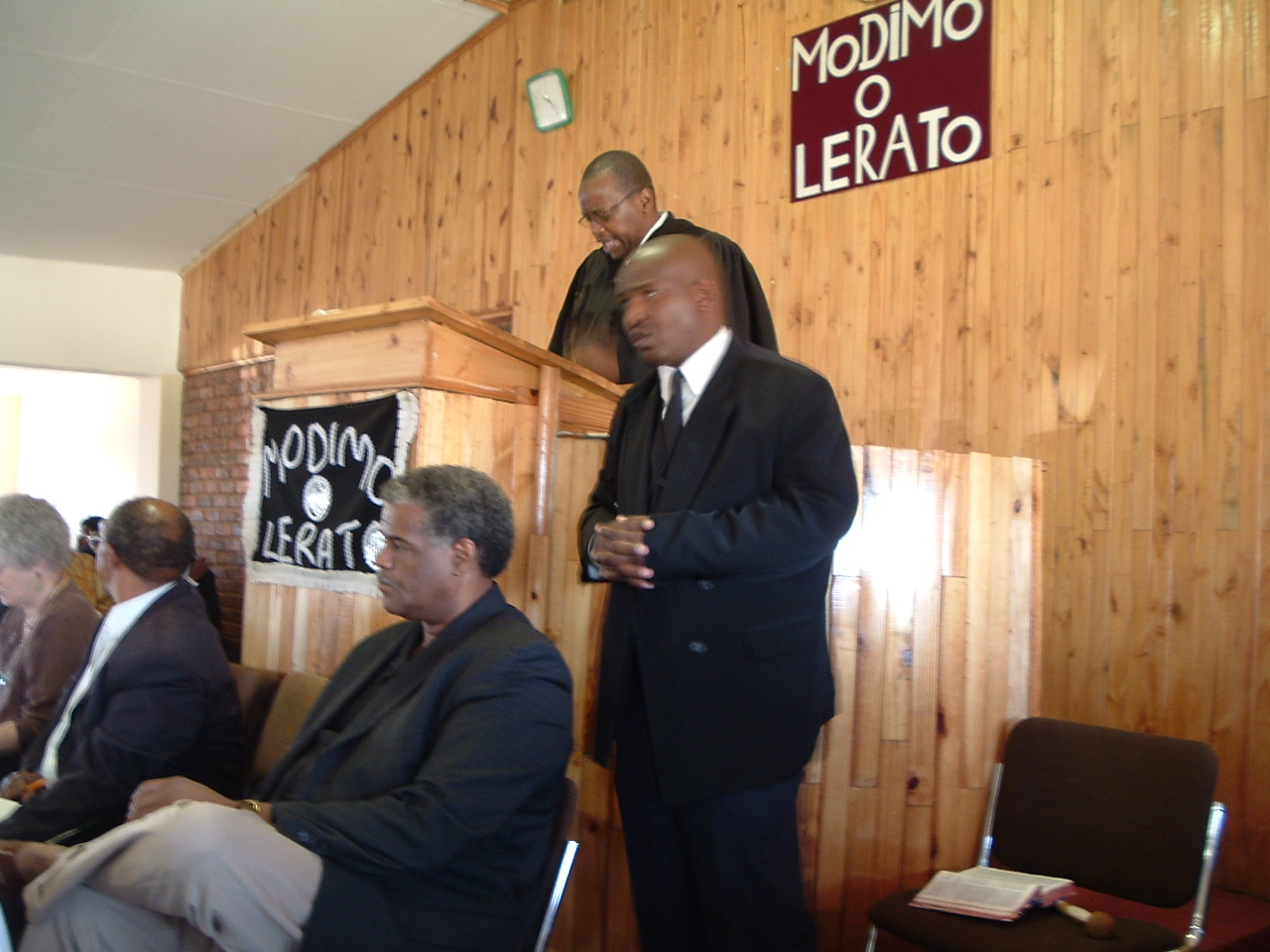 Rev. Paul Ntshumayelo and one of his chief elders acting as translator speaking to the congregation while Glenn Williams, president of the Laborers’ local union in Indianapolis, sits in front of the crowd.