Johannesburg: We marched the short distance from our hotel up the hill and then down several blocks until we saw the tall building with COSATU House in large letters at the very top.  Once on the 10th floor of this building, one could see all of downtown Jo-burg across the train tracks and the Mandela Bridge from this perch.  This was the home of one of the most powerful labor movements in the world.  Our Organizers’ Forum delegation was especially excited about this visit.  Zwelinzima Vavi, the General Secretary of COSATU (the Congress of South African Trade Unions), had agreed to let us sit in on a meeting of their organizers making a recruitment plan for the next year.

COSATU was the largest of the several labor federations in South Africa by a large amount.  Its membership was between 2 and 3 million strong.  Given the level of unemployment and the strength of the labor movement, labor density was most modestly reported at over a 40% rate of union membership and sometimes recorded as high as 55% of the workforce.  Furthermore the South African labor movement had a deserved reputation as part of the liberation movement over apartheid due in no small measure to its open armed partnership with a wide array of social movements.  Many observers had long been impressed with the level of rank and file democracy and accountability of COSATU.  This was likely to be as good as it gets anywhere.

After sharing introductions the COSATU leadership had suggested we meet in five different groups, according to sectors, with several of our counterparts whether farm workers or community, public or security workers.  This gave us an opportunity to really have some excellent conversations with the comrades (as everyone constantly called themselves in South Africa!) of COSATU.

One of the rewards of victory had been the passage of model labor legislation finally stabilizing the labor movement.  One could win recognition and negotiate a collective agreement by showing 51% card strength, and even prior to that by achieving certain thresholds one could negotiate sectorally the minimum wages for certain sectors and other conditions.  This turned out later as we learned more to have challenges, but on the face of it, the law gets no better than this.  Additionally, the labor movement won “stop order” rights or what we would know as “union shop” wherever they had achieved an agreement.

In order to deliver to the membership COSATU had joined with the African National Congress (ANC, which was the ruling party) and the South African Communist Party (SACP) to create the Alliance in order to provide the strength to govern upon the fall of apartheid.  Ten years later as we heard increasingly in our visit this involved some controversy and challenges, but it had put COSATU right at the table of power in South African affairs, and it was difficult to argue about that.

As always in developing countries or countries like South Africa (or the USA) with wide gaps between the rich and poor, the growing level of unemployed and “informal” workers was immense and there seemed no good organizing strategy for confronting it.  COSATU was caught playing catch up and that was its clear first priority.  It had to deliver quickly for its membership and was still trying to move that program ten years after victory.  A huge strike of 800,000 public sector employees right before we came into the country had achieved close to a 7% raise and was being touted as a show of strength though not a complete victory for COSATU.

I sat in the public sector session with Mary Rowles from the British Columbia Government Employees Union among others and our counterparts in state, federal, and municipal unions in South Africa were shocked to hear what we could not do and the laws that we did not have compared to their own.  They found it unbelievable.  In going through the legal regulation of unions, I shared with them to their great laughter the requirements of Taft-Hartley and Landrum-Griffin and their restraints on membership or support of the Communist Party.  They thought this was hilarious and commented that if that prohibition existed in South Africa there “would be no leadership!”  Our comrades then pointed out one leader after another who was in the SACP and on its executive or this or that.

We all travel in different worlds in the house of labor, but face the same challenges almost everywhere. 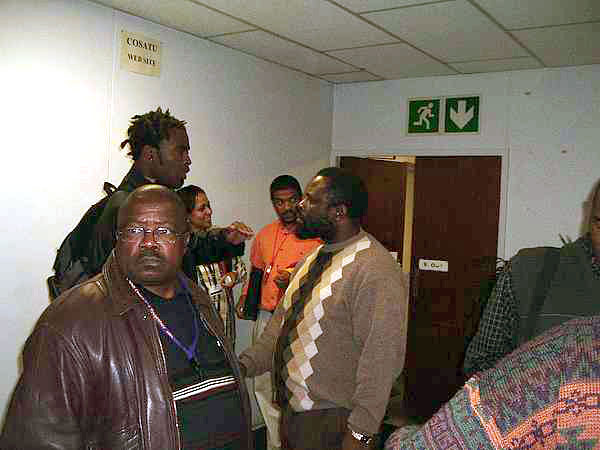 Willy Madisha, President of COSATU talks to some of his affiliates organizers as he mingles with the Organizers’ Forum delegation.