Nairobi: Perhaps the biggest surprise to me was the pervasive ubiquity of NGO’s – non-governmental organizations – in Nairobi.   I had read that 90% of the Kenyan developmental funds come from the “donor community,” but until visiting the city and seeing all of the NGO’s headquartered here for all of Eastern Africa and beyond, I had no real idea what it all might have meant.  Quickly in my mind at least Nairobi became NG-obi!

Group after group after group we met with got money from European Union countries or private and church foundations.  We ran into at least three (3) Ford Foundation funded operations, and probably more that that received funds from U.S.AID – the United States Agency for International Development – including the Solidarity Centers here (and later in South Africa) and a whole lot of other outfits as well.  Catholic funds from Germany and the Netherlands were big on the progressive front.  Oxfam was also an important funder.

What this had produced was a startling “client-ism” culture.  It took me a couple of meetings, but not too many to start to recognize that at a certain point towards the end of the meeting with various NGO’s there was going to come an elegantly phrased expression about whether or not there was a way to “partner” with us.  The first time I heard this expression, I took it at face value and gave my usual response that I was just visiting and had no sense if we were going to do anything in Kenya or Eastern Africa, but was just trying to learn, blah, blah, blah.  Quickly I realized that this was a graceful pitch for resources, so I as rapidly began to re-emphasize the fact that ACORN was an organization of poor people living in the United States is relatively the same stew.  Most accepted all of this with grace, but one could tell that this was simply part of the gambit of normal and everyday conversation in NG-obi.  One always tried to take a shot at the goal, if for no other reason that the off-chance of scoring no matter how low the percentage shot.

Perhaps my favorite was a hugely talented woman running an NGO in Kenya which though autonomous had been created in the mirror image of a U.S. group that was involved with both women and civic participation values.   Until less than a year ago the executive director had been a representative of a consortium of EU donors and clearly had been hired to make rain.  She shared a 3-year plan that would have them raising roughly $5M USD for programs over the period, which would have been massive by any standards, especially Kenya’s.  She confided when I asked her directly that she was only passing through for 3 years or so before she hoped to move up and on, and I dare say her trajectory could be limitless in NG-obi.  She was a player all the way, every day!  I did find it ironic though that for all of the programs and special projects that she was designing to increase transparency and accountability of government and other embryonic institutions, when I asked her some questions about her own internal structure, she did not bat an eye in describing the fact that she claimed 28,000 members yet there were only about 180 individual and association members who actually paid enough dues ($25/year lifeline) to qualify to attend the Annual General Meeting (AGM – and man, did I hear that abbreviation a lot!) and of that number only about 60 usually attended to make policy for this huge NGO for any given year.  Wow!

Similarly, there was another great irony that had taken the form of a constant dispute between the developing labor movement and NGO’s.  The Kenyan Human Rights Commission had been totally supported by the donor community and had without a doubt played a fantastic role in the dark days of Kenya in fighting against illegal arrests, abridgment of rights and free speech, and tens of other issues, and had been – finally and to its everlasting credit – on the winning side.  The organization is run by a very small board, composed largely of Kenyan activists, many who have lived in the U.S. and E.U. for decades and started the KHRC as ex-pats trying to do right by the home country.  All of the money then and now comes from outside of Kenya.  The rub though is that now that there are labor rights and unions have started organizing and winning, not surprisingly as legitimate representatives of the workers, they want to take back their pride of place on issues around workers and workers rights.  Unfortunately, KHRC wants (and with donor support can do so for quite a long time) to continue to noodle around in this area, and perhaps even go after the unions around issues of internal democracy and so forth.  I’m sure there are always issues to be found in unions, but a natural alliance instead becomes a huge area of contention, while the real problems with both government and employers are ignored.  Talking to the KHRC junior staffer handling this also gave me pause since she was less than a year out of college at the Nairobi University and was skeptical when I described to her that most unions in fact allowed their members to ratify collective agreements and other internal issues.  She just did not know, but her naivete hardly mattered, because the money kept flowing and she had a job to do. 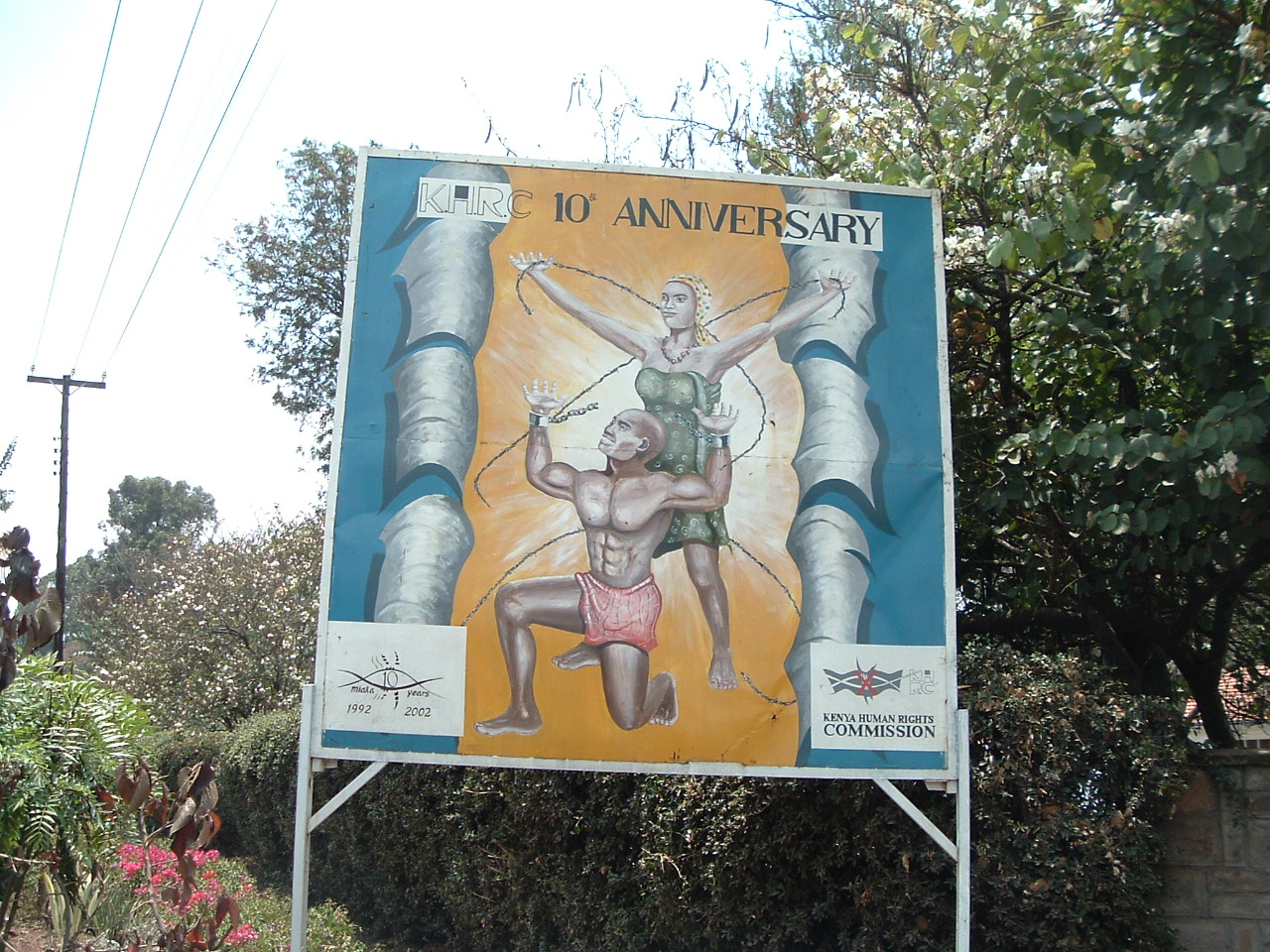 KHRC sign in front of their compound celebrating 10 years of critical contribution and struggle for human rights in Kenya.