London: On the tube from Heathrow my neighbors looked at me peculiarly on the subway as I pointed out a huge rainbow that could be seen simply by looking out the window.  After the dry weather during most of my time in Africa, the dark clouds and touches of rain seemed very London, and at the least justified the raingear I had now lugged for 10,000 miles.  The rainbow was long gone by the time I reached the Earl’s Court stop and hustled to meet Neil Jameson, the director of London Citizens.

I was curious about London Citizens and had been delighted that Neil was available for dinner as I changed planes between continents heading home.  On the website and information put out by the Industrial Areas Foundation, based in Chicago and originally founded by the legendary community organizer, Saul Alinksy, affiliated IAF projects were listed in places like London and Berlin.  I was very interested in how the IAF’s church based model and general systems were holding up in another country.  In Johannesburg we had visited with another organizer, Ishmael Mkhabela, who had claimed a representative relationship with the IAF, which seem to have never matured into a real organization in South Africa.  I had visited the Citizens website, so I knew that was not the case here.  Citizens was obviously well engaged and moving in a number of directions with clear campaigns.

Neil Jameson was a pleasant and quick companion, and we spent an enjoyable several hours talking about the work and conspiring about the future.  Neil had been hard at it for the last 15 years and had covered a winding road from work in social welfare in the UK to a Churchill fellowship to the US to discovering church based organizing and then trying to recreate the basic model through his Citizens Organizing Foundation in the UK.

Neil was refreshingly candid in talking about his work and some of the hard lessons they had learned.  He felt perhaps that they had jumped into too many cities originally in the Midlands, Birmingham, Bristol, Liverpool, and elsewhere without thinking clearly through the nature of the relationships between the organizations, the foundation, and what was being built collectively on a national basis.  He and Citizens had accomplished one of the rarest of organizational feats.  They had essentially learned early lessons, regrouped, retooled, and come back stronger.  This was the birth of the real “citizens” operations and made it unique.  Now all of the organizational projects were clearly “branded” and identified as “Citizen” organizations, as in London Citizens, West London Citizens, Birmingham Citizens, and so forth.  This was an organizing lesson that ACORN had learned in spades and could appreciate fully and that other organizing networks in the US had often complimented.

Citizens was in its glory now and on the upswing.  Having expanded its based to include trade unions with churches, they had been able to move Ken Livingston, the Mayor of London, and a notoriously independent and left politician within the Labour Party debates.  There last large meeting had forced commitments they felt meant something.  The key – another lesson we shared – had been moving on “living wage” campaigns in London.  They had successfully targeted underpaid workers at the banking giant HSBC’s operations, and we also enjoyed trading stories about HSBC from his Citizens living wage experience and ACORN’s predatory lending experience with Household Finance, now owned by HSBC.  Taking about future campaigns and conspiracies was natural and easy.

Visiting with Neil and hearing about London Citizens and its work, it became clear that this was a solid operation trying to build something that fit well and moved and adapted where it was necessary.  It was also clear that the relationship between what was in the UK with Citizens and the IAF in the states was certainly decent and respectful, but decidedly distant and hands off.  This was an intellectual and programmatic legacy, not an affiliation by mutual policy and design.

Whatever it was or was meant to be – London Citizens was working and Neil Jameson and his staff and leaders were making the best of the opportunity to try and build something big and powerful.  It would be a real thing, and it would be their own thing, and I for one would be very interested in seeing what develops as this organization learns, adapts, and breaks new ground in London town. 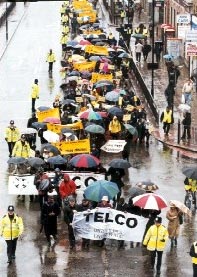