New Orleans: Every year for a million years — certainly close to 30 years or so — the organizational staff that make up the ACORN family of organizations — ACORN, ACORN International, AHC, SEIU Locals 880 and 100, KABF, KNON, CCI, and a score of others — come together for what we call the YE/YB — the Year End / Year Begin Meeting.  The purpose is almost self-descriptive.  The staff assesses the performance of the organization over the past twelve months in both written reports and direct meetings, and plots the goals and objectives for the coming year.  There are dozens of workshops on everything from services to organizing to skills to campaigns.  There are meetings 24 hours a day it seems with formal sessions and caucuses, and of course there is the French Quarter beckoning just across the street!

The meetings last anywhere between 1 1/2 days to 3 days — depending on the operation.  For the last 25 years or so the meetings have been held either in New Orleans or nearby ever since the operational headquarters of the organizations moved to the Crescent City in 1978.  In those days we met for many years across Lake Pontchartrain at Fontainebleau State Park in their group camping area — sleeping in bunk beds and meeting in an open, damp room on concrete floors and sitting on picnic tables.  Those days were really not that long ago and continued through the early 1990’s at the least.

Gradually the organizations have grown and size overwhelms space.  Over the last several years we had to move the swelling crowd of staff first to hotels off of Canal Street, then to the Hyatt across from the Superdome for a couple of years, then last year to a new hotel on Canal — the Astor — and now over the last several days we met at the Sheraton on Canal.  As the organizations have expanded recently the texture of the meeting has changed.  The 2003 YE/YB was the largest.  The staff was over 500 then and 380+ were at the meeting.  That was huge.  But, this year it was dwarfed in the explosion of growth for ACOFRN and some many of the other organizations.  More than 720 paid staff crowded into the Sheraton for the meeting!  Literally twice the staff that were there last year!  Once I finish the agenda these days and open the meeting and look out at this huge crowd of our staff, my job seems to have migrated from Chief Organizer to Master of Ceremonies.

The last two years as we have gradually bitten more of the bullet in this cultural shift, we have also had a banquet and some of the top organizational leaders — Maude Hurd, ACORN’s President, Vernon Bolden, Local 100’s President, and Helene Miller, Local 880’s President, have traveled down to take part in an awards ceremony highlighting those staff and offices who have had the best year.  The staff leans up and gets a chance to celebrate — and it is a wonderfully, fulsome and happy time.

This year we had great performances from every operation.  The organizers for the year were all outstanding:  Hector Cortez (Phoenix ACORN), Wanda Busby (Local 100 Baton Rouge) and Margaret Grayson (Local 100 Houston), Margaret “Brynn” Seibert (Local 880 Child Care Director), and Holli Holliday (ACORN Political Organizer).  The office of the year for ACORN was Newark, New Jersey — more than 1000 new members in that one office last year.  The Housing Counselor of the year was Regina Davis from Oakland and the Housing Developer of the Year was Tara Benigno.

After the awards people starting dancing a the line was jumping with the electric slide as folks got ready to hit the streets and keep it going until trains, vans, cars, and busses pulled off at dawn to take hundreds of organizers back to their home offices fired up and ready to go.

You should have been there when we had the 2004-year end meeting! 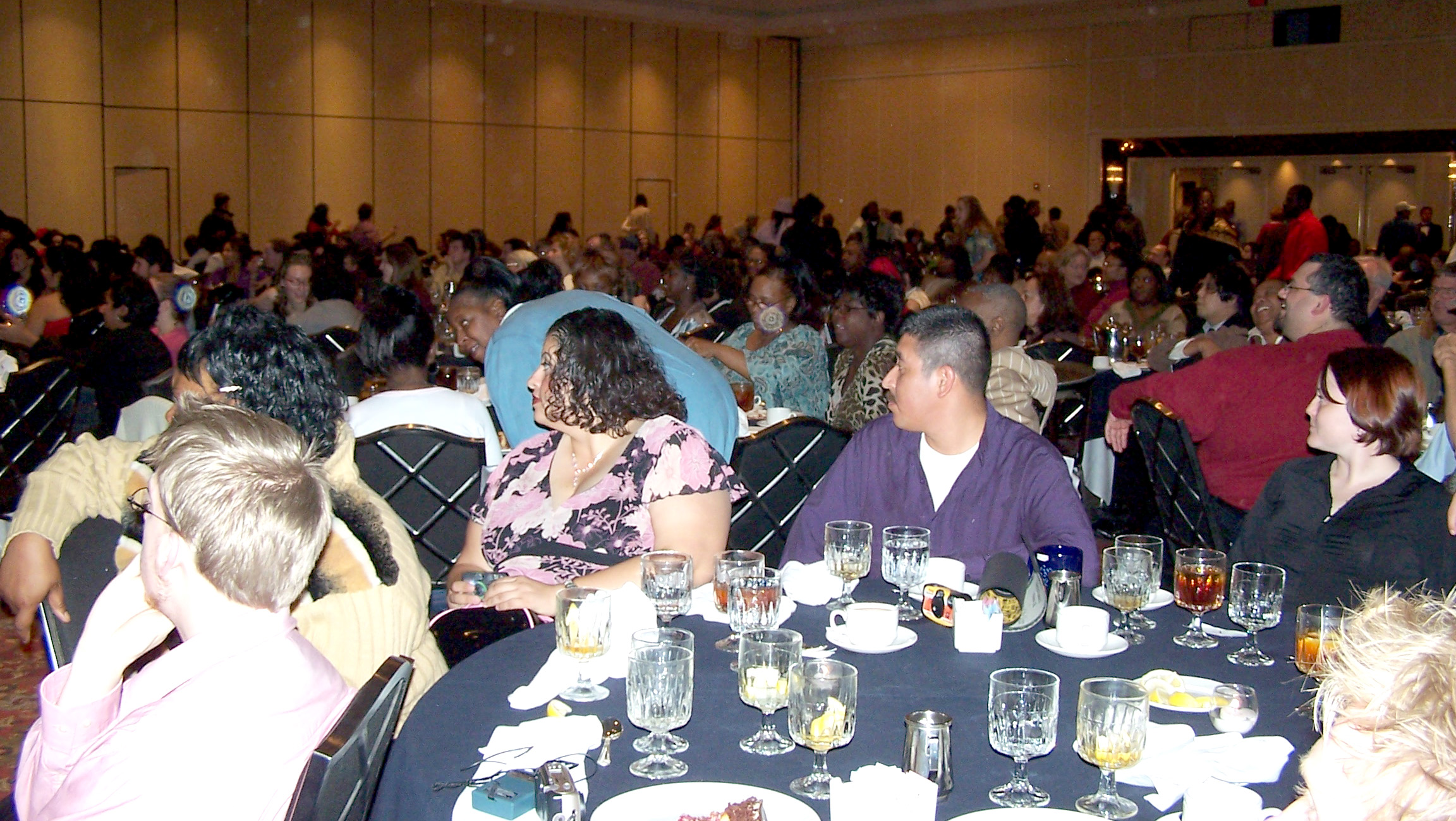 More than 700 staff crowded into the Sheraton for the YEYB 2004 Banquet! Literally twice the staff that were there last year! 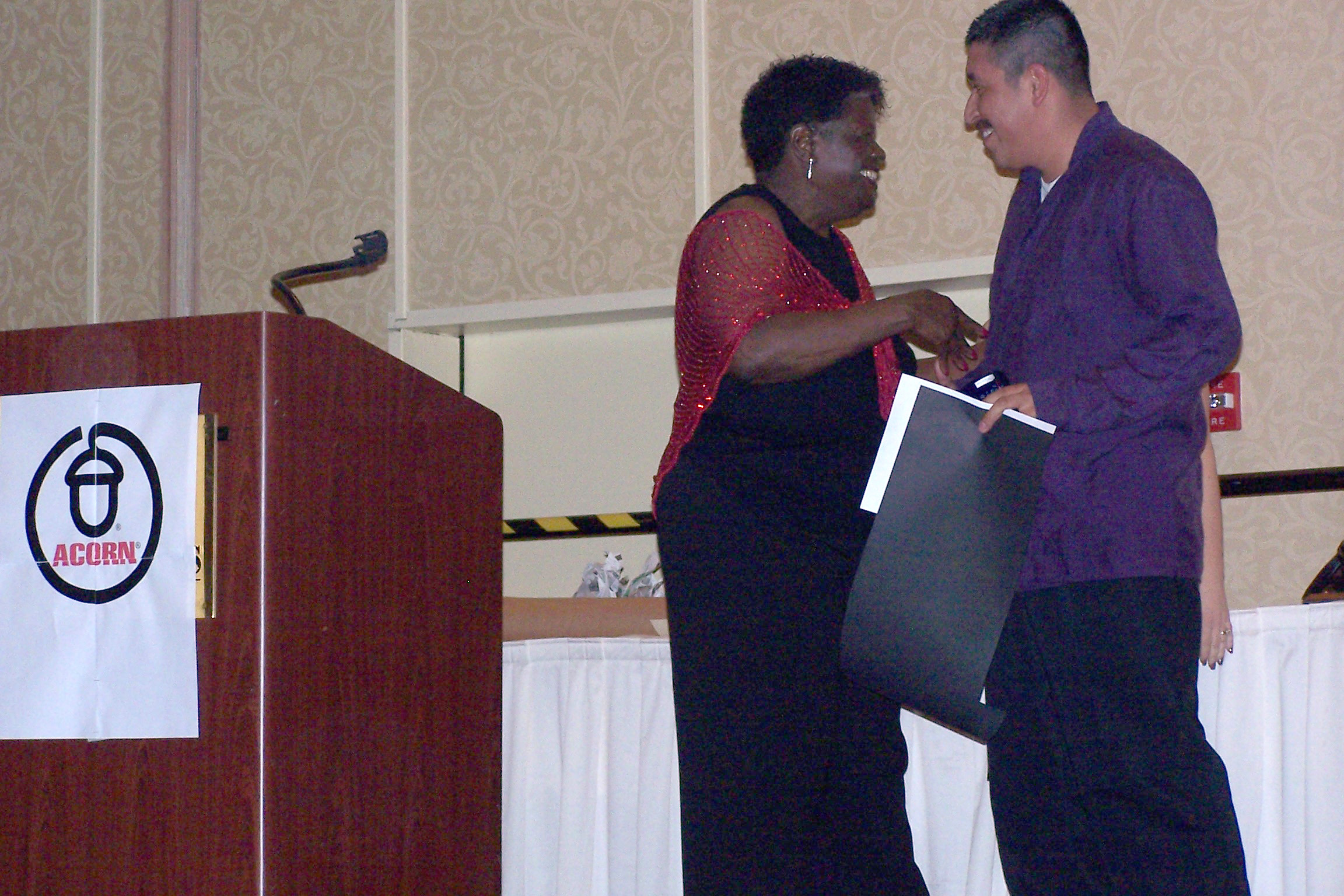 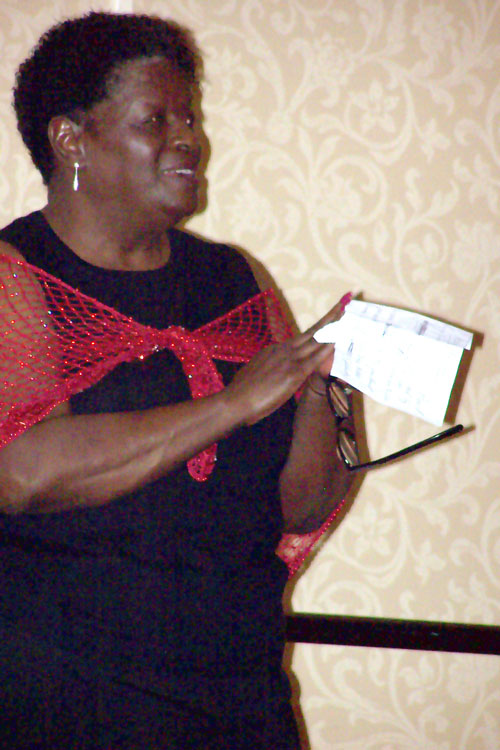