Caracas: Key for us in getting some sense of the real level of community participation in the “process” as they called it was getting our feet on the ground and visiting with some folks who were in the middle of the day-to-day work.  We had excellent guides, including Efrian Valenzuela, a well known community leader in one of the largest of the barrios, Caricuao.

We all piled into a 4-wheel drive Isuzu, called a Caribe, in the local market and headed to the far western edge of the city.  Caricuao was the last stop on the spur metro line before the zoo!  In much of the area Efrian showed us the various stages of development of the high rise apartment complexes including his own of about 30 years.  He was on the 3rd floor in the walkup, but the stairwell was refreshingly sweet smelling this damp day compared to what we would find in the USA.  One thing that was the same was the broken elevator, which would have made the 15th floor a daily workout.

We moved from the high rises to the alley ways that crisscrossed the hillsides of Caricuao.  Many of these homes were caught in a cycle of struggle trying to get title and establish credit to rehab these structures, some of which dated back 45 or more years according to Efrian, when building materials were sent by Cuba and its new leader then, Fidel Castro.  We spent a long time ducking rain drops crowded in the living room of one of the homes trying to understand the way credit would be established.  Essentially, if we got it, there are individual accounts that are established by employers — or may be created by the unemployed as well — and held by them from what we could tell — and run about $4-5 USD per month.  Once a twelve month period successfully passes the individual is credit worthy.  As good as this program sounded, the chaos of recent years and much else, seemed to have left this largely a promise still unimplemented.  We shared the work of ACORN’s Housing Corporation counselors and the similar work they often did, and offered to help.

From Caricuao we drove back towards the center of town to La Vega, a somewhat smaller area, but a barrio build on rising and turning hillsides, story after story, reminding me of a Rio favela.  At the very top we stopped and visited Mision Robinson on the 2nd floor of a family home where on an open breezeway we found a couple of dozen desks, whiteboards, computers and the paraphernalia of education.  The Mision though was not for the young, but for adults trying to become literate, get their GED’s, and catch up with the world and work.  The new constitution was part of the reading curriculum.  The operation was volunteer run and managed.  This seemed to be popular education at its best.  A short 50 yards away from this home complex was a “mercatel” — the controversial food outlet established by the government to deliver better commodities at cheaper prices to the barrio.  Folks said sometimes it did, and sometimes it did not — though they appreciated the effort.   We talked as the rain came down harder, then softer, then harder again.

Finally, it seemed time to leave La Vega.  Traveling down the hillside, we were surprised that the water was surging through the drainage cuts along small curbs within inches of the doors of houses and small informal businesses.  Farther down the water began to become rivulets, then rivers of browning water crossing, then covering the roads.  The going became slower in the harder rain.  Other cards and busses were stalling out, men on their carnival holiday were working in the water to unplug drains and build small dikes to reroute water away from their door.

By the time we made it through the flooding streets to the main expressway, we could tell we were in a flashflood of sorts and worried that mudslides could be moving in the brown water behind us.  When we had left earlier in the morning, a smallish stream was running in the middle of the expressway marking the valley that forms the axis of Caracas but now there was a swollen river rising on its banks to the bottom of bridge crossings and the top of the street line.    The newspaper called it all — “Lluvia Letal” — Death Rain as the worst flooding since Hurricane Hugo drenched the city.

Chucko Garcia, who we visited the day before asked Jeff Ordower and I to be on his national radio show.  For an hour we interspersed descriptions of ACORN and its work and what we were learning with rushed announcements of emergency numbers and interviews with civil defense and the fire chief.  Real time!  Real worries.  Live all the way!

We had seen a lot this day in the precarious tilt of houses and families almost washed down the valley and out to the sea. 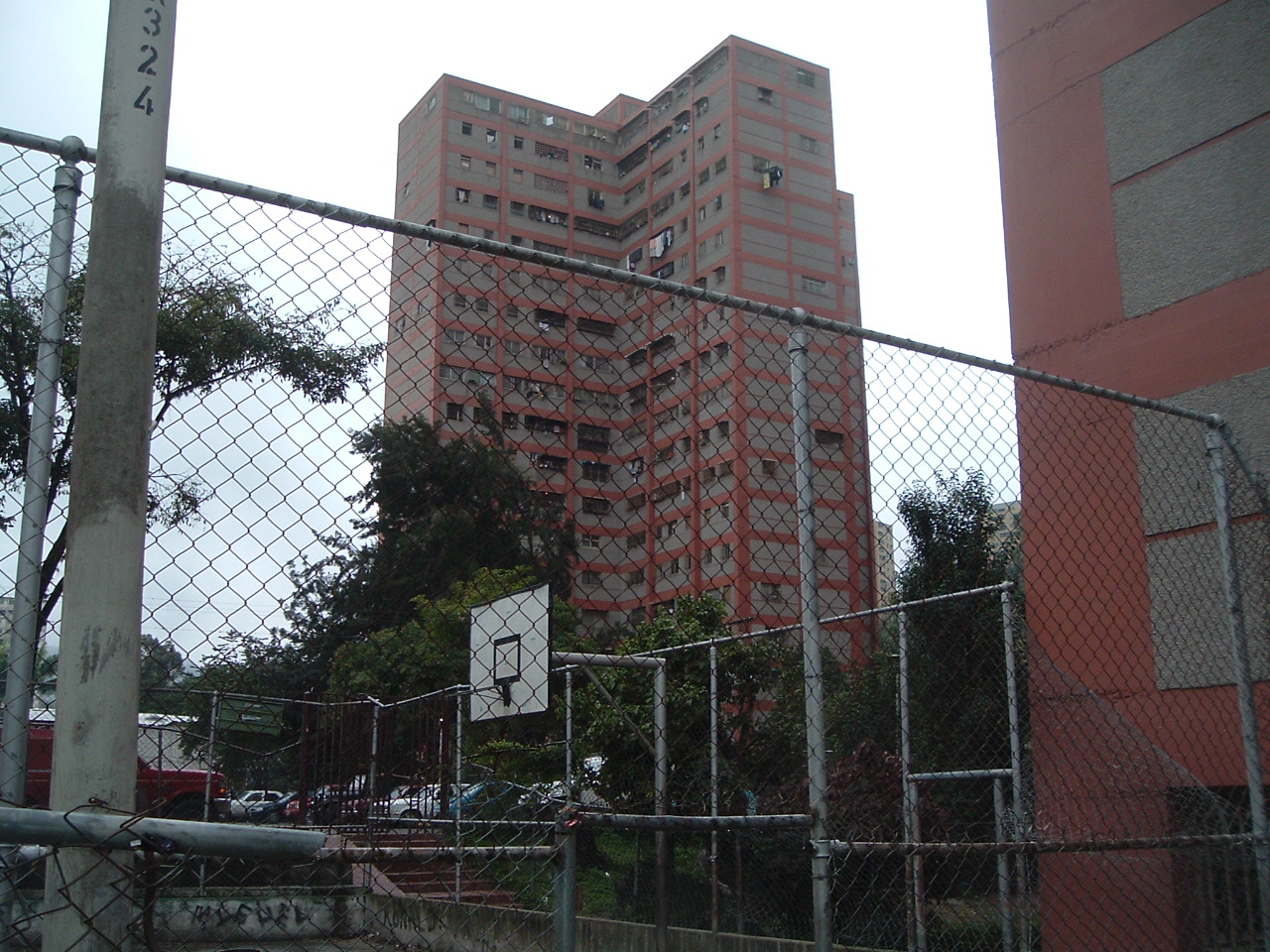 Cariacao high rise.
The view from the houses on the hillside of Cariacao at their neighbors across the holler.
The classroom of Mision Robinson in La Vega.
La Vega on the hillsides.
The National Radio Station symbols.
On the air with Chucko and Efrian — and the back of Jeff’s head. 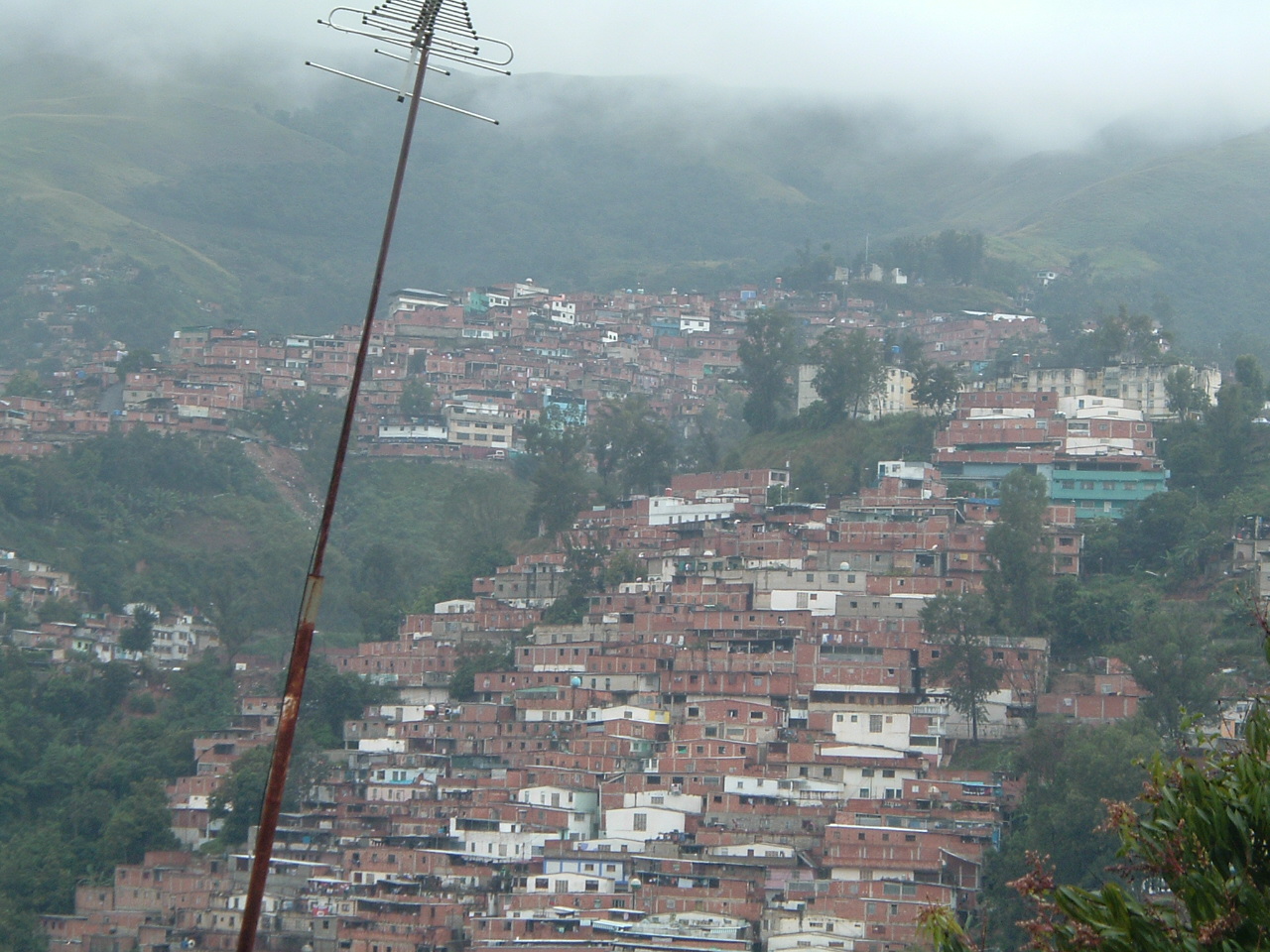 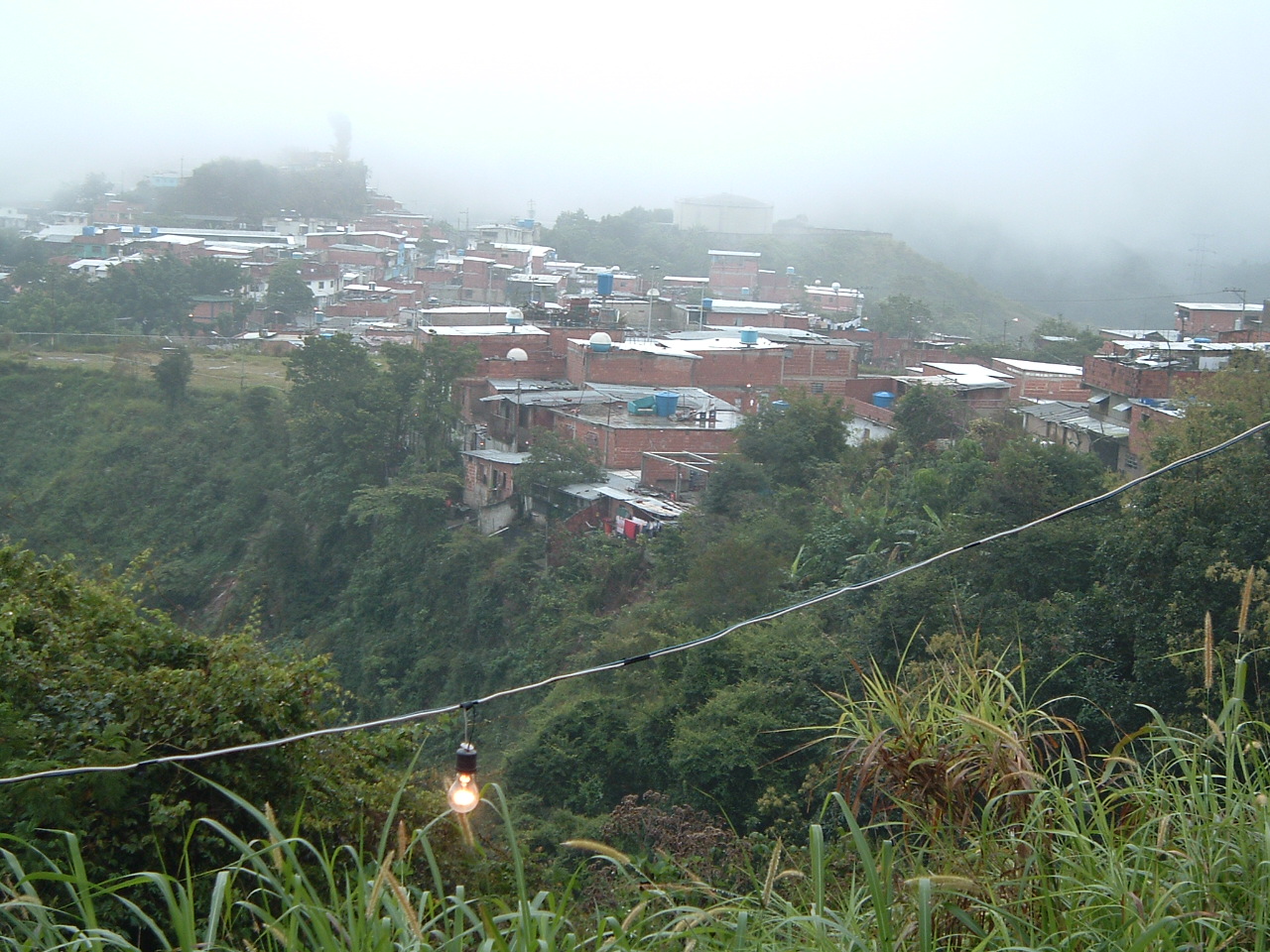 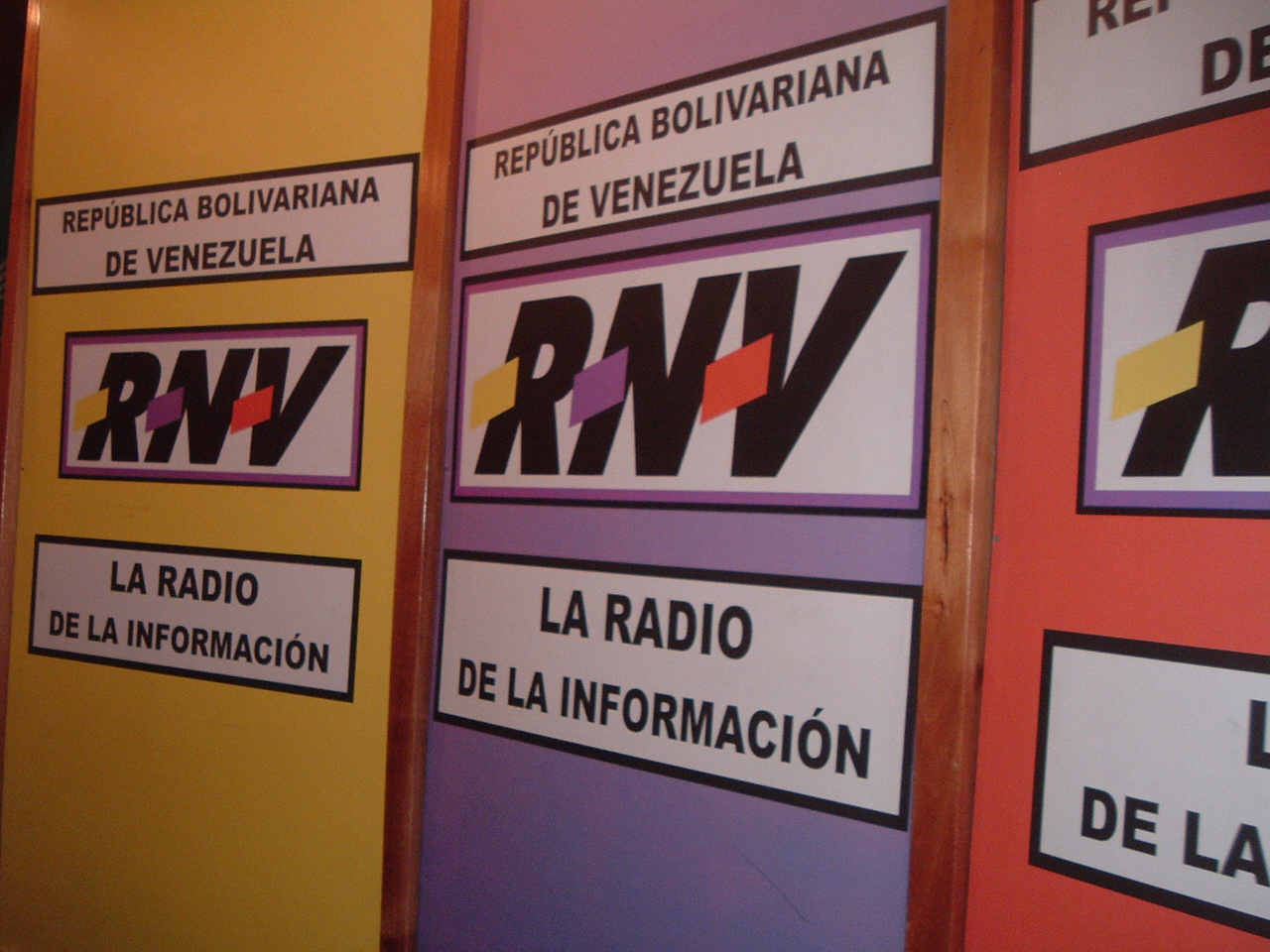 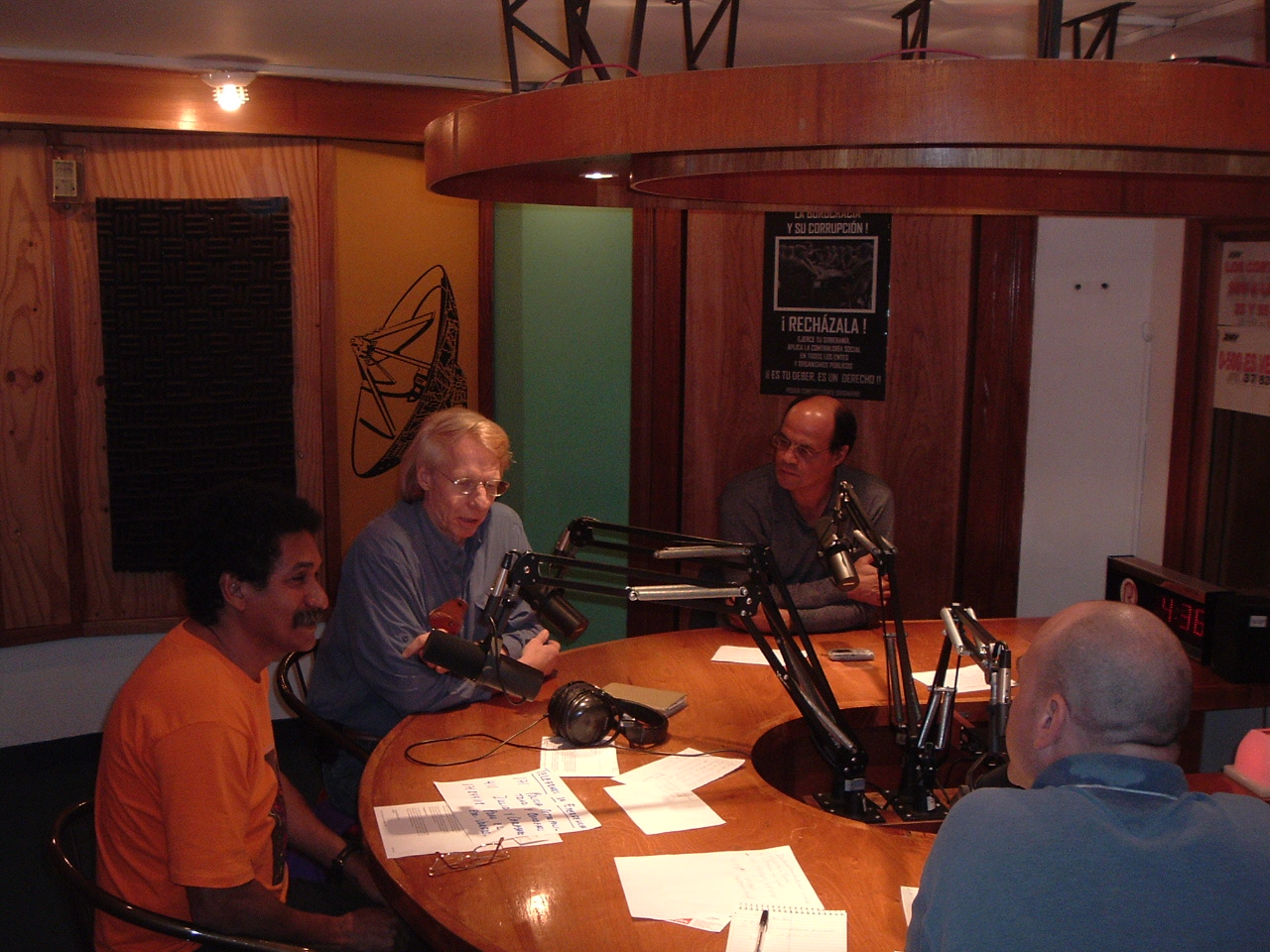