Caracas: A highlight of our visit was going to be our meeting with a number of the board members of the UNT — the National Workers Union.  We arrived promptly for our appointment in their offices in the Labor Ministry building.  We could hear the loud talk of a meeting in progress when we got there, but we were quickly given a red covered pamphlet in English to read.  Reading quickly through the tract, we got the message — they were used to visitors from the United States and elsewhere asking them a lot of questions about the dispute between the CVT, which had been the central federation for Venezuelan unions, and the new, upstart UNT, which was closer to the Chavez government and was replacing its strength.

This is not a trivial dispute, though it did not happen to interest me in these meetings.  There were ILO sanctions and real questions about whether or not the unions were free and independent of the state.  There were charges and counter-charges about union democracy and required elections for maintaining union certifications in the early days of the Chavez government.  The head of the “chamber of commerce” had been the leader in the attempted coup or putsch on Chavez, and had taken the CVT out with him on his side of the political mess and earlier on the takeover of the oil company.  These matters are points of heated dispute (see www.socialpolicy.org).

My interest was rooted in how small unions, both individually and collectively, were in Venezuela.  Though it was difficult to get exact figures and language is always a struggle, it appeared that between both federations union membership density is only about 20% of the workforce (compared to the close to 13% of the USA and the 35% of Canada for example).  There was some disagreement among our brothers in fact about whether or not this represented 20% of the formal sector or 20% of all workers, and they believed it was the smaller number.  We hoped not, but feared this was the case.  The informal sector is 54% of the total workforce, and it remains virtually unorganized in any way.

Some of the UNT unions were doing some interesting work in trying to organize the informal sector particularly within the service industries.  Several organizing drives had targeted fast food workers, especially McDonald’s.  They were having huge problems with ACCOR — the North American conglomerate which manages Manpower — which has been exempt from organizing efforts here.  The transport sector had been overrun by the informal workers supplanting busses and taxis particularly.

But those were the highlights.  Unfortunately they shared too many of the weaknesses and troubles of US unions.  The dues percentage was only 1% — and they could not raise it because they were in such a competitive position —  it turned out that all of the people we were meeting, including the director (a woman!) and deputy director of organizing for UNT were detailed from affiliate unions, and in most cases were full-time workers in their industries and not full time workers.  The constitution allowed dues checkoff, but for the most part it was all “open shop” (voluntary membership without any payments from non-members for representations services).  Furthermore for all the brouhaha about the dispute between the UNT and the CVT, both co-existed in many industries, each bargaining for their members only in plants like Ford, GM, and elsewhere.  So, yes, the UNT was growing faster and had outpaced the CVT, but both were relatively small and weak.  Our compadres knowingly shook their heads at the problems of facing huge organizing tasks with meager resources.

We asked them whether or not their support of the government gave them any leverage in organizing non-union firms that they could convert into membership or contracts.  Were they able to win “labor peace” agreements allowing them to balance the playing field with new operations?  No, they answered, though they had asked the government repeatedly for some kind of assistance, but they complained the government was too many letting out concessions and licenses to anyone and everywhere to be willing to give them any organizing leverage.  This is the kind of quid pro nada that has been the standard operating procedure for most USA unions for decades when we have failed to convert political friendships to organizational success and membership growth.

I asked for their support around any expansion of Wal-Mart into their country, just as I had of the central federation in El Salvador a year ago.  They were very interested, but just as in El Salvador, none of the folks around the table had the faintest idea of the company or had ever heard of it.

This was a weak and struggling federation fighting tough battles with uneven odds, just like our own unions.  The UNT may have used its support for Hugo Chavez as part of its founding call, but clearly was independent of the government and not getting too many special favors.

They rented space in the Labor Ministry.  Was this at least a small sign of some favoritism or special treatment?  No, it turned out that there were a score of other unions of all persuasions in both the UNT and CVT, who were also tenants there.  Can’t a union get a break even when it supports the President in a coup, a recall, and throughout the entire process?  I’m sure somewhere that must be the case, perhaps in the halls of Congress or among poor and working Venezuelans, but for the most part, this is just another weak federation that can not seem to get a break in organizing and is hard pressed to survive and grow.  And, that is the real problem for unions and their members in Venezuela — the rest is just politics. 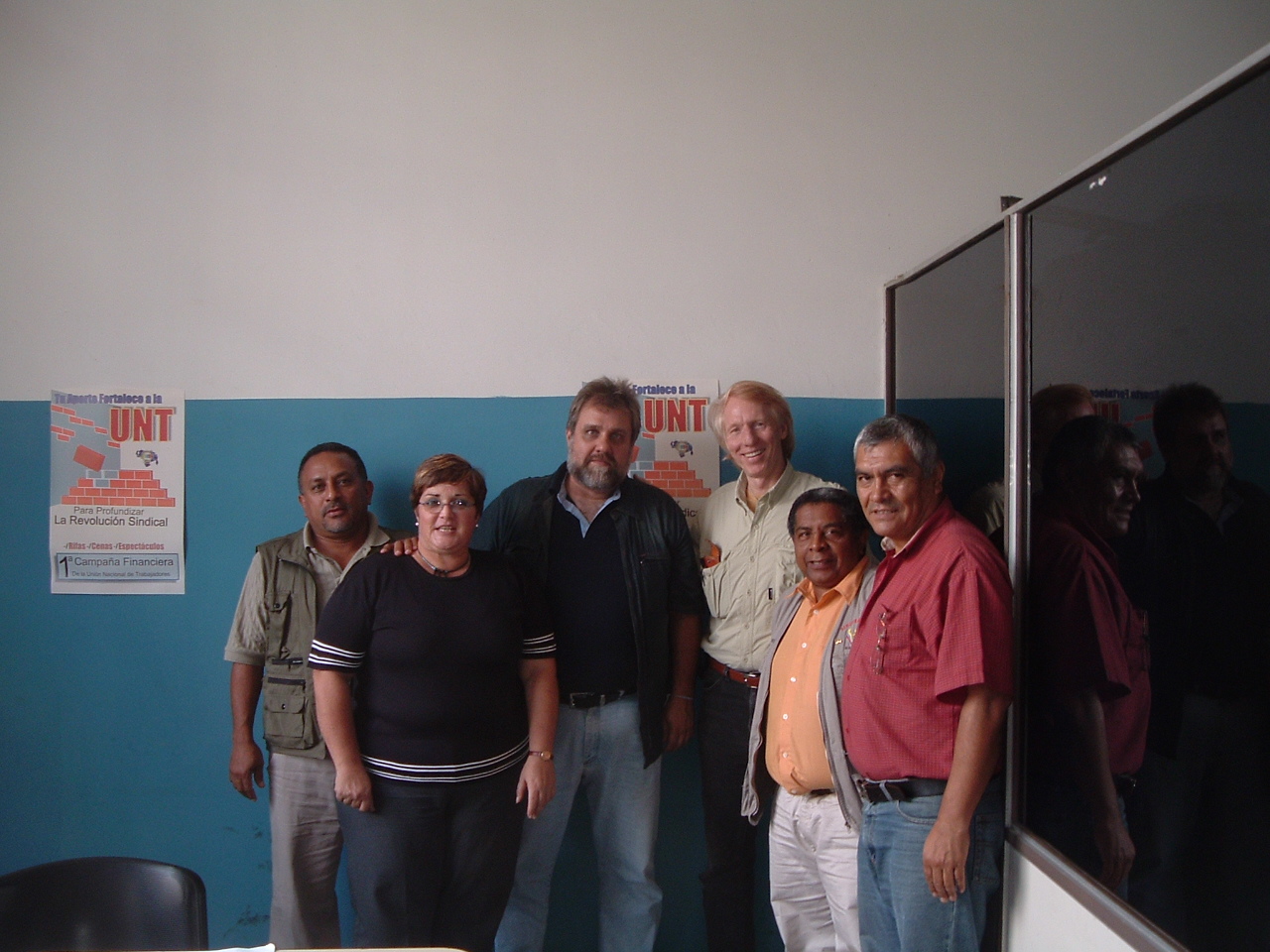 Leadership of the UNT including the top organizers along with me.