Caracas, Venezuela: Mardi Gras is a wild time in New Orleans. Having lived there for years, I am a hardened veteran. Our office on Elysian Fields is in the “party zone” a mile from the back end of the French Quarter. Partying is less the issue than parking. In short it’s a good time to work around the situation. I have used the opportunity in recent years to try and understand what is happening first in Argentina in 2003 in the middle of the fiscal crises, then in El Salvador in 2004 on the eve of the presidential elections, and now in Venezuela in 2005 after the failed recall of President Hugo Chavez and in the midst of the Bolivarian Revolution — a populist movement fueled by high prices on the oil barrels produced in Venezuela. My son, Chaco, accompanies me on these trips as a cashed out “frequent flyer” veteran celebrating an early birthday every year with this trip.

We flew in from Houston on Sunday night with oil executives and engineers who were on a regular Continental shuttle. I was raised in the oil patches of Wyoming, Colorado, Kentucky, and Louisiana, so I understand the language and the basic drill. None of our flying compadres could believe we were going to grab a cab from the airport to downtown Caracas. All of them had cars waiting, sent by their companies with signs saying “ConocoPhillips” or “ChevronTexaco” or whatever. Chevron sent two cars for its people — one to drive and one to follow! This was some serious crime. Once in the cab and driving into the city, it was deserted this late. The hotel was gated and barred. Asking about jogging was greeted by hilarity. Where had we landed this time?!?

Caracas acknowledges the Carnival holiday and has some interesting traditions one of which seems to involve throwing water balloons. Jeff Ordower, ACORN’s Midwestern Regional Director, was with us, having been here twice before. He had been an advocate for this visit and had lobbied consistently — and effectively because here we were — that this was something special and worth some inspection. Despite the fact that much of the city seemed shuttered for the holidays, we had our agenda and it was set.

The first day was straightforward. We met with the leadership of a new political formation called the PPT — Partido Para Todos — the Party for All of Us, including the national organizing director, Rafael Uzcategui. Chavez had not built a party yet, which allowed a lot of different flowers to bloom. It turned out that PPT was a regenerated effort from a hard left effort previously called the “Radical Cause.” They polled 4% in the national election recently, which seemed meager, but they saw themselves as a vanguard party, rather than a mass-based party, so they seemed untroubled by all of this and took great comfort, and appropriate pride, in holding 26 mayor’s seats and two governorships in states along the Amazon a considerable distance from Caracas. They had not started as Chavistas and in fact had opposed Chavez in the earlier election, but given the conflict they were fast friends and buddies now. It was interesting to hear these sectarian comrades arguing so sternly about “democratic participation” and their commitment to the “process” as everyone calls the Bolivarian movement being led by Chavez.

More interestingly was our visit with Jesus Chucho Garcia, who directs a network of thirty organizations throughout the country, who are trying to establish the rights of Afro-Caribbeans. Chucho argues with a lot of support we would find, that the African heritage and influence in Venezuela has been covered up and swept under the rug, but that means that racial discrimination exists, but is not acknowledged. The main national task of the network is to get a prohibition against racial discrimination into the Constitution. Many agreed that this was an unfortunate omission in the last drafting in 1999. This part of the population is invisible — though not really! — in any statistical way, because the government and census do not record African heritage. Chucho and others estimate the population is 30% of the country though. Chucho and his outfit — 8 staff and a budget of over $100,000 USD per year — are supportive of the president and much of his program, but still independent and pushing and pulling for change. We could understand this from our experience, so it was easy to identify with his fight.

A lot of people knew the line, but it was nice to find that many were not toeing it. 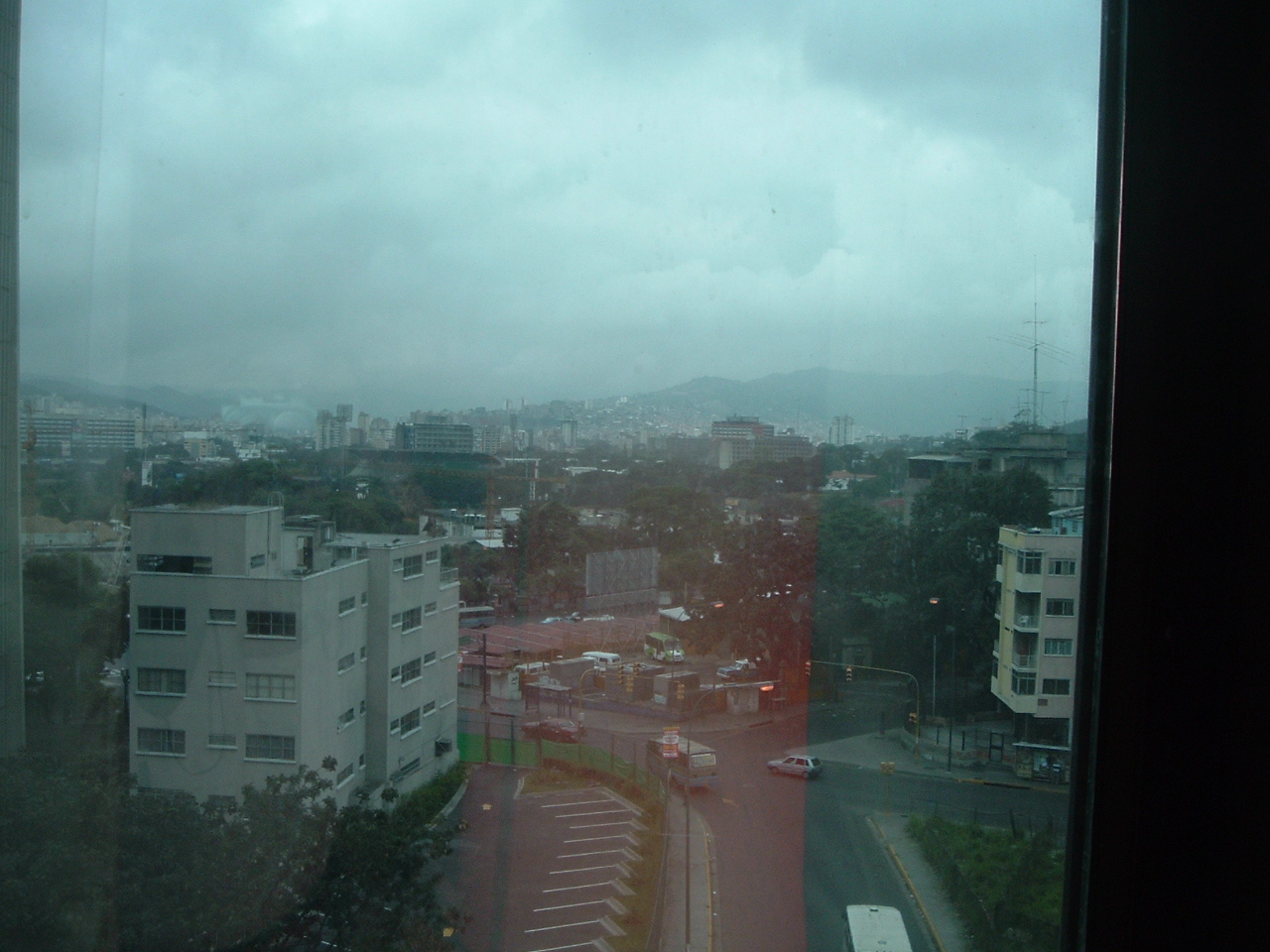 Caracas in the fog.
Rafael Uzcategui, the PPT General Secretary with Chaco Rathke.
Chucho Garcia of the Afro-Caribbean Network talks to us about these issues in VZ. 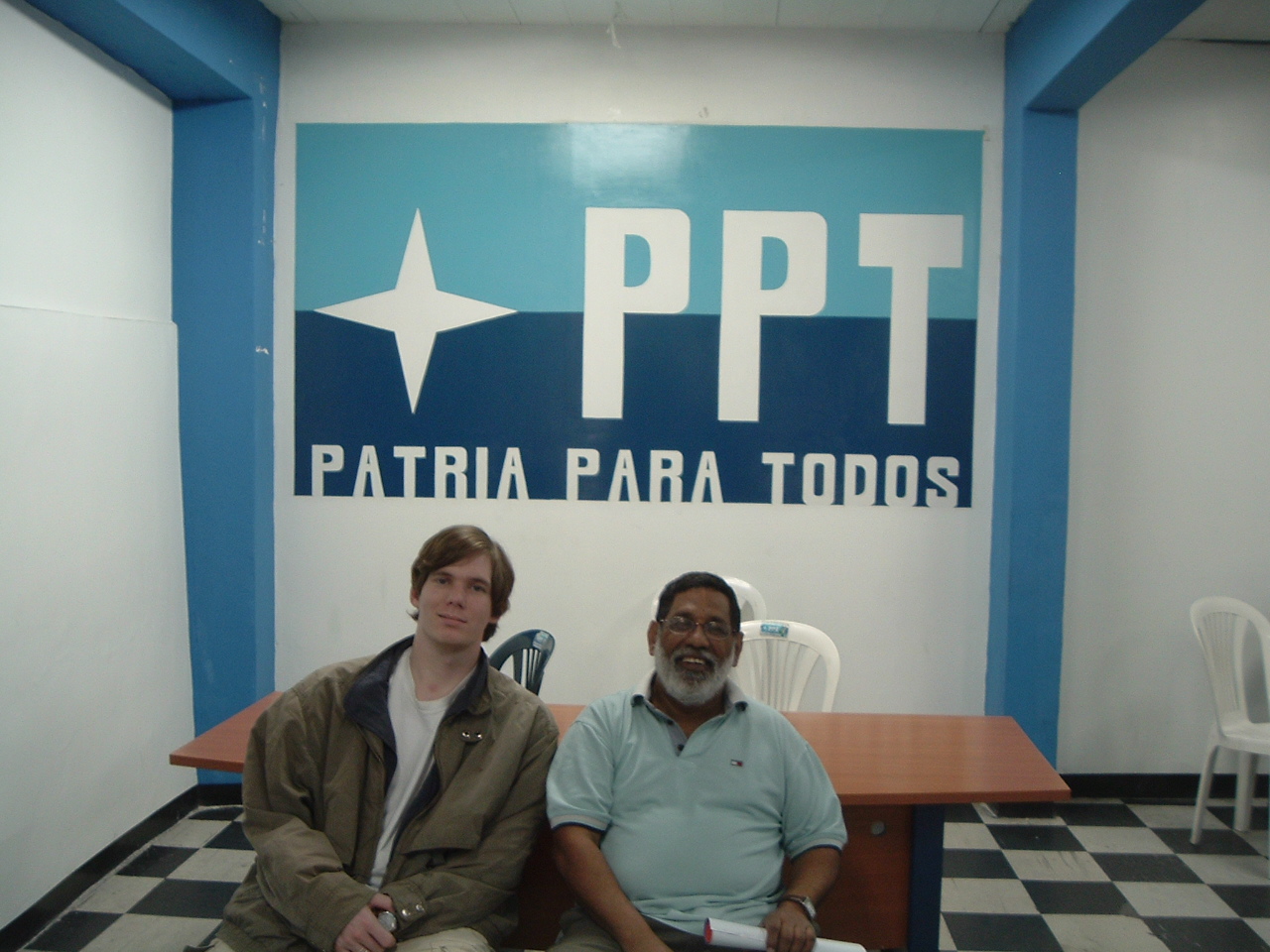 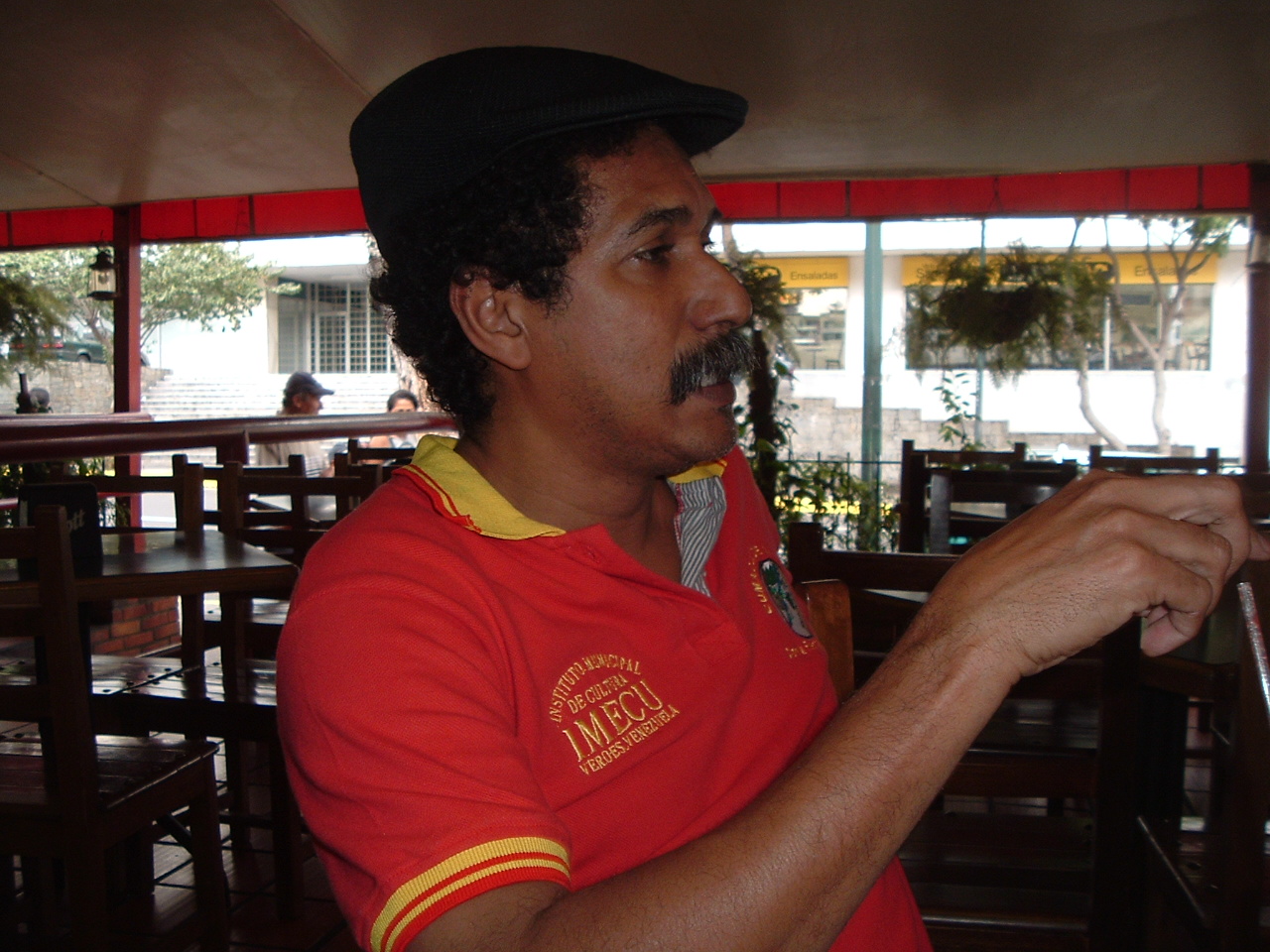