Porto Alegre: The World Social Forum is a hulky, ungainly, and thrilling piece of work.

At one level it is a constant frustration where nothing is every where you hope to find it, yet everything is happening both everywhere at once and no where you can find. In 2003 in Porto Alegre the last WSF was held in a university so it was all crowded into one essential space and many of the workshops were on one floor or another of the same building. The 2005 addition was stretched along the river front for miles and miles. With only an opening ceremony (where President Lula Silva spoke after the crowd waited for hours for his arrival in the premier run of the new state jet) and a closing event with President Hugo Chavez of Venezuela, the rest of the time one was propelled along one track or another in a subject matter silo — environment or social movements or economic development. This was fine as long as one never had a thought to jump from the “F” section to the “A” section — because that would be a walk more than a mile away in the heat of the day hiking along the river.

Donna Bransford, the director of ACORN International, had tried to pull some money together to take a delegation of the ACORN Executive Board, but that turned out to be a difficult pull up a tall mountain. Nonetheless, we had enough to bring Maude Hurd, ACORN’s President, to Brazil to get a better evaluation. We also had Isabel Diaz Ubillius from ACORN Peru and our ally, Luis Isarra Delgado, the President of FENTAP, the national union of water workers in Peru with whom we had a partnership based on assisting their fight against privatization of water in various municipalities in Peru.

We also thought we would try and do a workshop on ACORN and its organizing methodology and just see what happened. We had a dozen or so hardy souls: two young women from Brazil — a town about an hour south of Sao Paulo — who were trying to organize there; two women from different organizations in South Africa which seemed contradictory since one was involved in development programs for the church and other was involved in assisting squatter communities on church lands; a couple of folks from California led by a woman who was a graduate student in international development; another couple of folks from Brazil where the translation to Portuguese just did not work, and then our crew — three from the United States and two from Peru. It seems small and insignificant, but it was actually an enjoyable way to spend 90 minutes or so out of the heat — an experiment in time management and, hey, if we were there anyway, why not see what would happen. And, we did and it was interesting and taught us lessons for the next time.

Visiting with President Maude Hurd it was easy to see the problem and the potential. She found the entire experience individually exhilarating despite a hellatrip because of snow delays in the northeastern United States. Talking to many others it invariably was something that people seemed to enjoy, even if they really were not sure what to make of the whole affair. Unable to eat the whole feast, folks seemed to be satiated with the small bites they could digest. No small amount of this thrill was in the interchanges all around the World Social Forum — the buzz of being in the mix!

These seem to be the central questions dividing the organizers of the WSF as they look at the future. What is the real role of the WSF — is it simply a forum for hundreds of different points of view — a meeting of the diverse clans? Or, does the WSF have a role — and a responsibility — in building a social movement? If the first, they can keep setting the date and it seems more will come. If the second, they will have to corral the wild stampede of people and events, and it may be too late to do that.

Next year in continuing to try and get it right, they will break it apart again and take it on the road. The Americas edition was likely to be Caracas, while there were other four other locations in the rest of the world from Morocco to who knows where. The 2007 edition was rumored to be scheduled for Africa as the evangelical work of the WSF continues to increase.

This is going to continue to be a phenomena worth watching. 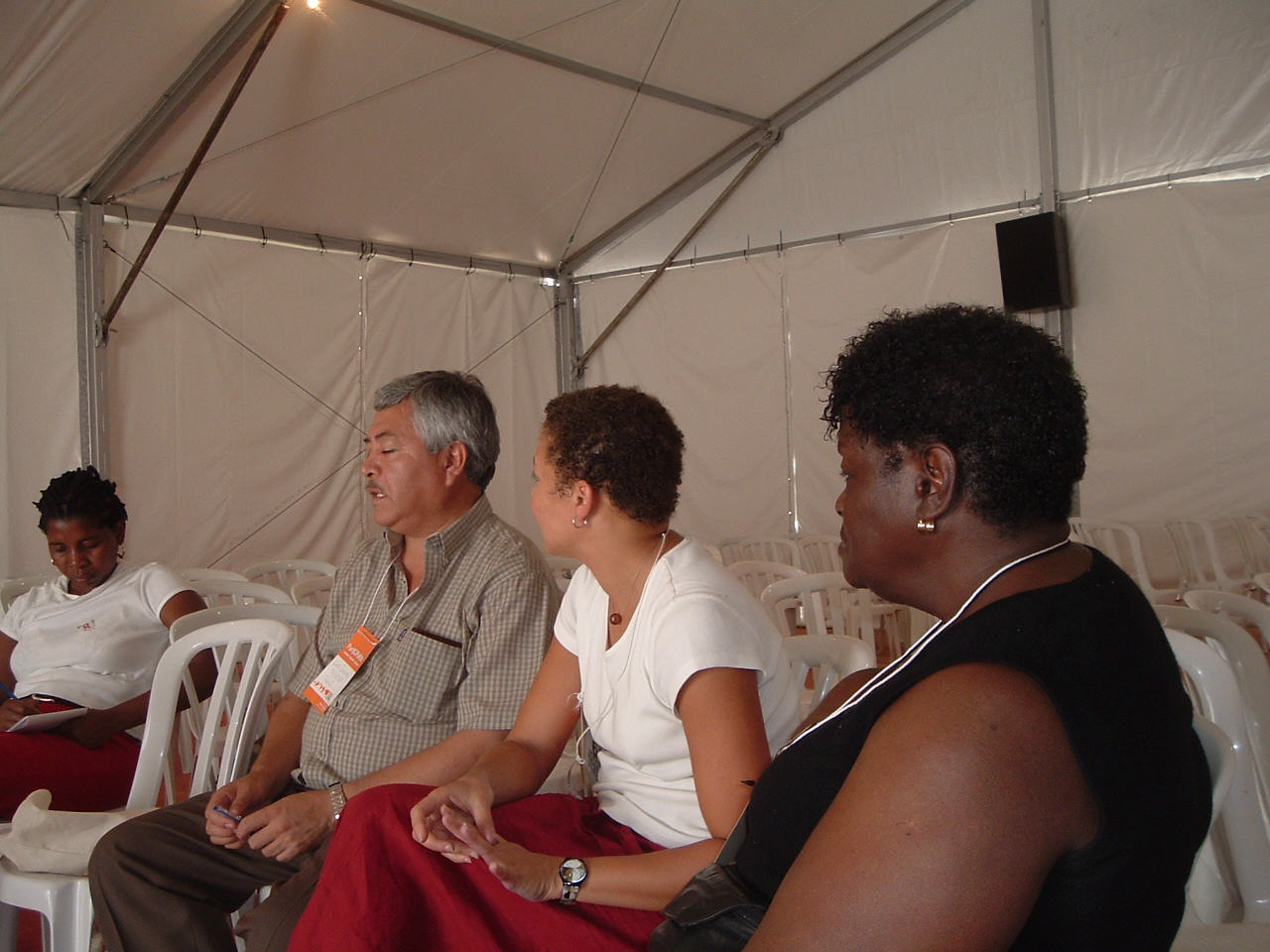 Maude Hurd, ACORN’s President with ACORN International’s Donna Bransford and Luis Isarra Delgado, President, FENTAP.
Maude Hurd gets ready to describe ACORN under the WSF tent to our sisters from South Africa.
Leaders of unions from Korea speak at the New Trade Union Initiative (India) workshop. A leader of the Brazilian CUT and the Argentina labor federation are to the right of the Korean delegate. 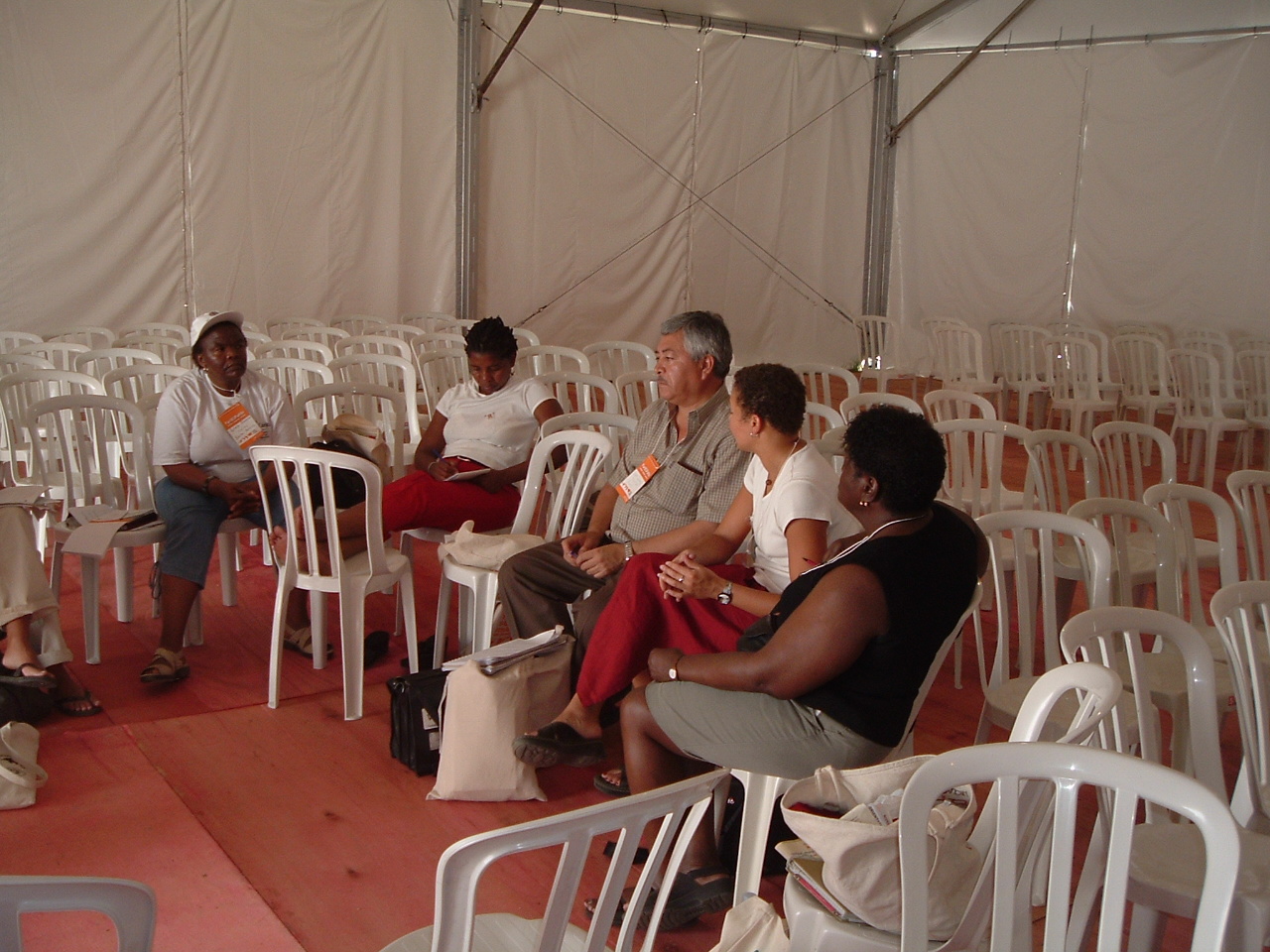 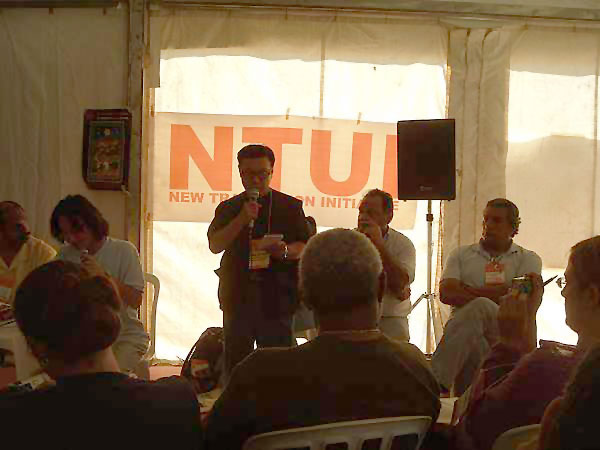