Seattle:  One of the big hits of the Organizers’ Forum had to be our old friend, the peoples’ pollster:  Celinda Lake.  Some of us have known Celinda virtually since she came out of Montana decades ago, but in the time since she has been the pollster of choice whenever an ACORN or the AFL-CIO or any number of other unions, women’s groups or others needed the hard facts that come with fine analysis.

Celinda and her team had done the pivotal polls around living wages around the country.  She did the poll in New Orleans in 2001, which still ranks as one of my favorites, especially when she was willing for the little money we were able to raise to get the job done, to also come back down to New Orleans, brief City Council elected over breakfast and then meet the press, where she was quoted on the more than 86% support that a raise in the minimum wage in New Orleans, according to her figures, was “more popular than Mardi Gras.”  She also did the key early poll for ACORN in Florida way before the 2004 election which established the credibility of the effort statewide and helped convince people and players outside of ACORN that it was worth the financial investment to help us win big.

Celinda had graciously agreed to slip in on her schedule to talk to the organizers assembled at the Organizers’ Forum dialogue to give her perspectives on framing.  For several hours she kept the room virtually spellbound as she stood by her trusty power point and ticked off almost 80 frames of information for everyone.   It was a classic Celinda performance, and here are some of the nuggets:

* Don’t make the mistake of trying to win support on your campaigns by asking help for “seniors,” make sure instead you refer to them as “elderly.”  Turns out that polling reveals that the public sees “seniors” as a bunch of RV riding, well tanned, frolicking folk, while the “elderly” are the people that need help and support!

* Without question only a higher rate of divorce could have saved us in 2004, because married women seem to have provided a huge part of the margin in state after state.  Married women went widely for Bush because they became “security moms,” rather than soccer moms.  Bush had succeeded in framing the issue as not the cowboy fight against terrorism, but as the homeland security fight to protect hearth and home, and moms bought it.  Men in the midsection of the country did not really believe they were in much danger in the home country, but married women it turned out whether in New York or Des Moines felt equally worried about themselves and their families, and voted accordingly, when Kerry had no response.

* Celinda was also clear that on some issues we were just unable to move people — even when we were correct, because we had been “out framed.”  No matter the truth, the American people did not believe the huge mega-Bush tax cut was responsible for the widening maw of a budget deficit.  People wanted to believe we had money problems because of ground zero and war in Iraq and Afghanistan, not because Bush had given away the store to the rich.

On and on we got the message with cold humor from Celinda, and like it or not, we were thankful that she had convinced so many who had paid top dollar to share the word with those still scrapping up money for lunch and car fare out there on the hard streets and workplaces of the country, but for two days hearing in all in Seattle from the pros. 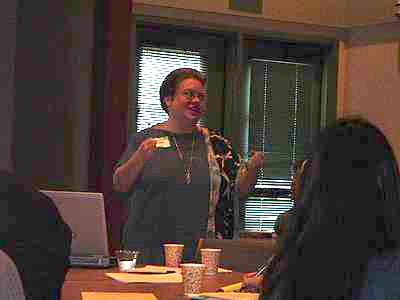