Baton Rouge     President Bush and I were together on the tarmac in Baton Rouge today putting out boots on the ground. He went his way to cover his ass and play politics. I went to our office and union hall on Greenwell Springs to get to work on the dirt. It was Labor Day, so I guess it was a day for working.

When there is a real national crises; and it is absolutely and abundantly clear that all hell broke loose and the ball was dropped somehow and someway, the government virtually always creates a blue ribbon commission to white wash the problem at the least. So far President Bush has not even shown us the decency and respect for our poor, broke ass City to at least be willing to con us and create some show pony thing.

Or, just maybe in this disaster of mess and mayhem, racism and classism, shooting, looting, and killing, and total anarchy and governmental abandonment, the President should create a real citizens committee, a New Orleans Katrina Commission, and get to the heart of why this was allowed to happen. We need a modern day equivalent of the Warren Commission looking at Kennedy’s death or the Kerner Commission examining the riots that swept the country in the 1960’s or even the more recent independent and bipartisan 9/11 Commission to look closely at the divide of race and class that allows our government to turn its back on a half-million people.

Sometimes there are questions that can not be ignored. This is one of those times.

Call 800-643-9557 and send email to demand that an objective, fact finding commission be created.

Let’s demand the that the first meeting be held the day the water is back in Lake Pontchartrain. 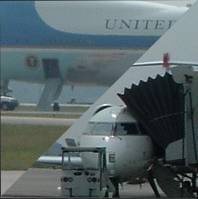 Pres. Bush and I arrived at the same time.