New York        Trying to pull pieces of the puzzle together to get a snapshot of where one lives and works is a guessing game.  Reading the paper on the plane last night from Dallas to New York, I imagine that gradually as the water recedes they are allowing reporters to follow on the house to house searches where they are hard handling the survivors.

It still comes as a surprise though to read about your own neighborhood in the lead story of the New York Times, but there it was in the third paragraph above the fold:  “In at least one neighborhood, the Bywater district, a working-class area east of the French Quarter, police officers and federal agents began on Wednesday night to press hard for residents to evacuate…”

In another article on page 21 under the eyebrow headline of “Staying Put,” comes a report on by Alex Berenson of another holdout, “But Michelle Loranger does not want to leaver her flood-battered city.  Sitting beside two of her neighbors on the front steps of a tidy house on Desire Street, in the working-class Bywater neighborhood, Ms. Loranger said Wednesday that she would not voluntarily leave New Orleans.  Her home, on high ground near the Mississippi River, survived the flood with only moderate damages, and she has plenty of food and water, she said….Like many other residents in the city’s dry zones near the river, Ms. Loranger appeared to be healthy and said she had taken reasonable precautions….”     Elsewhere in the same piece, “‘They’re going to have to drag me out kicking, screaming and fighting all the way,’ Melvin Johnson, who is living in a dry house on St. Claude Avenue in the same neighborhood, said Wednesday.  Mr. Johnson said he could not abandon his two dogs, and like some other residents, he hoped to find a job as the city’s cleanup progressed.  ‘There’s going to be work in this town,’ he said.  ‘ I need it.  I’ve lost everything I own.'”

Ok.  So, now it’s official, as if everyone in New Orleans didn’t know it already, we live in the Bywater neighborhood and it is officially — right there in the New York Times not once, but twice! — a working-class neighborhood.  It is also well known in New Orleans, and now officially documented by the Times as the neighborhood of an eccentric collection of obstreperous folks, and Sister Loranger and Brother Johnson absolutely fit the time.  I never found it difficult feeling at home there over the last twenty-five (25) years I made my place in the neighborhood.

Desire Street is six (6) blocks away from our house going towards the Quarter.  St. Claude is two (2) blocks away from our house going away from the River.  Our office is virtually at the corner of St. Claude and Elysian Fields (please remember this is the pathway to heaven in Greek mythology!).  It’s not a satellite photo of my exact address, but it sure is an indication that the odds are improving that — everything else being equal — we have a chance at still having a place to return in the coming months that we can call home.

I wonder in the “new” New Orleans that rises out of this mud whether my “working-class” neighborhood and obstreperous neighbors will have a chance of staying.  Even before Katrina, there was starting to be gentrification leaking downriver from the Faubourg Marigny neighborhood starting to push values out and make the Bywater too expensive for regular, working people.  We are an old neighborhood of shotgun doubles with our stoops pressed up against the street.  This is not uptown where there are front yards and trees.  This is downtown where you live in the street and maybe there is a 10 by 10 patch of grass and plants in the back behind the shed.  The dividing line between Marigny and Bywater is not surprisingly the old Press Street railway tracks which ran to the cotton presses by the River.  There is even a marker proposed in hand lettered signs on the tracks where Plessey had the incident on the train right there on the dividing line that became the famous in the Supreme Courts’ “separate but equal” ruling.

Race and class was not new in these neighborhoods.   All of our organizations through our building corporation, the Elysian Fields Corporation, had just completed fighting our way through the city planning commission to win approval of an expansion of the ACORN and Local 100 buildings on lots we had owned for years.  To our surprise the expansion had been vigorously opposed by parts of the yuppie civic association in the area, the Faubourg Marigny Association.  They had hired a lawyer with a long New Orleans bloodline, Gideon Stanton III, to oppose our redevelopment.  I had originally met Stanton 30 years ago when opening the ACORN office when he was a grantee of the Stern Foundation at the time and referred to me by the late, great David Hunter, who directed that outfit throughout his illustrious career.  They had to concede that they were not in love with the abandoned furniture store on St. Claude we would be demolishing and replacing and they could not contend that the architectural plans were not consistent and acceptable to the Historic District Commission, which had already approved them, but in a classic argument of New Orleanian racism and classism, Stanton had tried to argue before the City Council in his final pleas to have them deny our zoning and construction permits, that “we were a fine group of organizations, but that we had gotten too big for the neighborhood and would undoubtably be more comfortable and it would be more appropriate if we relocated and expanded in New Orleans East or elsewhere.”

With its majority African American membership the City Council understood the coded language explicitly.  Stanton was trying to argue that Faubourg Marigny should be a “white” and upscale area and not be burdened with the headquarters of national and local organizations and its low and working-class membership coming in and out of the area.  New Orleans East would have been the code for the black dominated and increasingly lower rent areas of commerce and section 8 housing.  Council member after Council member demanded to speak in favor of our zoning not because they were surprised at the sentiment, but because usually uptown, upper class, white lawyers like Stanton were a little slicker with this stuff.

The New Orleans one got to see at the Convention Center and Superdome was the New Orleans split for centuries by race and class long before Katrina.  Increasingly the surface layers have been washed away, so time and time again there is no denying the cleavages in American life that have always been symbolized by the great divides of New Orleans, and are now starkly presented for the entire country to see. 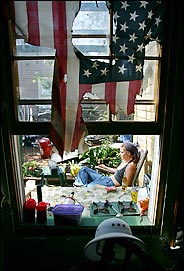 a holdout in the Bywater