Alonzo Suson is the Cambodia country director for the AFL-CIO’s Solidarity Center. A veteran of student and political organizing back to the Marcos days in the Philippines, he spend a long career as an organizer with several SEIU locals, most recently Local 49 in Portland, as well as the Western Region where he ran campaigns, including the Sunrise Hospital drive in Las Vegas. He came to Cambodia 14 months ago for a change of pace and responsibility. He has definitely been to the rodeo.

He and his driver picked me up at the hotel and we drove to the Riverside along the Mekong in Phnom Penh, an area of hotels, bars, colored lights, boats with lanterns going out in the Mekong. We sat outside and visited in a breeze on a totally pleasant evening after a hot day and the usual afternoon rain.

Alonzo was able to fill in a lot of the gaps for me. The economic base Cambodia was pilled in stacks. Textiles were the largest stack. The donor community provided a stack almost as large populated by a huge number of NGO’s. Tourism was created almost as many jobs. And, then there would be the vast informal sector.

Textiles provided about 1/3 of the jobs, maybe 250,000 workers was his guess. Unions had huge density here; over 80% of the industry was organized. Labor constantly roiled the industry. There were lots and lots of unions, sometimes 3 or more in one plant, and whenever one or the other had a beef, as few as 30 or 40 workers in front of the gate could shut down a factory with over a 1000 workers until something was settled. There were very few collective bargaining agreements, and in fact our friends at the Tourism and Service Workers Federation had more agreements in their young industry, according to Alonzo, than existed in the whole textile sector. Textile unions had little interest in agreeing to labor peace and providing a “no strike” clause as part of collective bargaining agreements on one side, and on the other few unions were so confident of their support in a particular plant that they felt they could win a required election to displace their competitors and bargain exclusively with the firm. The status quo was a wild west of strikes sometimes leading to resolutions and sometimes being met by plant closings where the operator would reopen a couple of months later with another workforce.

The public sector was small and disorganized as well with fewer rights from what it seemed, than the legal procedures provided private sector workers. The influence of the donor community meant that there was also very little experience with either paying — or collecting — dues from members, so the organizational base being created either for unions or for informal workers like the moto drivers was far from sustainable. Alonzo shared with me that the 50 cent per month dues rate I had heard about from the Tourism and Service Workers was a pretty new phenomena, only recently increased from a quarter per month. It became clear that dues were more talked about than collected.

One could also draw the conclusion from Alonzo’s analysis that unions — at least some unions — were also part of the donor system. The Tourism and Service Workers and maybe a half-dozen others were shorn up by direct financial support from the Solidarity Center, which probably was the critical difference between sustainability for them as well, given the uneven status of dues check-off and collection. The Solidarity Center, supported by AID, backed unions that were committed to achieving collective bargaining agreements. The collective bargaining regime is the universal ideology of labor unions after all, so this should not be surprising, whether it works or is a mass strategy for empowerment of Cambodia’s workers or not. In the same way the moto drivers being organized by the Cambodian Association for Informal Economy and Development (CAID) were clients of the German Development program.

The alignment of unions with political parties, whether the Cambodian Peoples’ Party, which seemed to be the old residual community party, and some others that were part of the ruling coalition, versus the opposition parties, which styled themselves as pro-democracy efforts, though much of the argument seemed to be that they were pro-change in government more than anything else, also complicated the matter. Most unions still seemed to favor the government from what Alonzo indicated, which may explain why the government was still willing to live with some level of labor strife in garment manufacturing.

Alonzo was all about making things happen. He had big plans, and he was making them happen. He had supported a rally on May Day with 20,000 workers, which set the stage for some different events. He envisioned a meeting of all of the tribes in December around the banner of living wages, which would bring together the unions, NGO’s, and other forces with perhaps 100,000 people to link human rights with wage and labor rights to start addressing in larger terms what it took to raise the minimum rates up across the country. These plans would cost money, and he would have to raise money to make them happen, once again from the donor community of course.

These were clearly exciting times to be organizing in Cambodia, but the work in the future did not look any easier than what had come before. There seemed to be no real organization among the poor or squatting communities, and the issues around land and housing were huge. Organizing the tourism and service industries was only going to get harder — and more dangerous — as the union now needed to tackle locally owned and operated properties and casinos rather than the big international hotel developments that could be leveraged. The informal economy was growing and there were no real mass organizational forms or plans that had come together yet. Public sector workers were marginal themselves, supported by a very low tax base, and therefore prone to the okey-doke and self-directed entrepreneurism.

Someone with ideas, access to resources, and experience, like Alonzo now or Jason Judd before him could really make quite a lot happen in Cambodia. Where it was all going and where it would end up, was hard to predict. In fairness one could say the same for much of organizing anywhere in the world today.

The weight is getting heavier though and the stakes are getting higher. We better start having a clearer idea of the end game and what power will look and feel like, if we are able to get there. 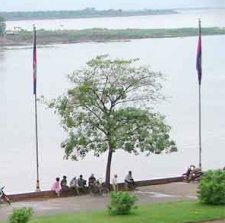