We had heard that the Independent Federation of Tourism Sector Unions or in Indonesian the Federasi Serikat Pekerja Mandiri (FSPM) was an aggressive, grassroots union operation making strong headway among particularly the internationally branded hotel properties in Jakarta. These folks were so close to the ground though that they did not really have an office, you caught them on their “hand phones,” as the Indonesians refer to cell phones, and you did so strictly on the fly. Several calls and frequent communication between Barbara Bowen, the stalwart coordinator for the Organizers’ Forum, and the young general secretary, Odi Hudiyanto, made us hope that we were in good shape to make contact.

As the appointed hour came though, one guess would have been as good as another, whether or not this was all going to work. The general plan was that we were going to rendezvous with Brother Odi and the gang at the Grand Hyatt in the Indonesian Plaza and hope for the best. An hour before the time a text message from Odi indicated that we were now meeting them at a rally or action in the Plaza. When we arrived there were 100 or so blue t-shirted workers and others rallying in the center of the Plaza with a contingent of 25 or more police positioned around the affair. Advice had warranted caution in being around the police, but approaching the head officer directly for permission indicated quickly that they had no problem, so the biggest danger we encountered was crossing to the center of the plaza against 5-6 lanes of traffic.

The rally was a long one. We spoke very briefly with good wishes and solidarity and dispatched to the Indonesian Mall to wait for the meeting after a bit. Coffee and even lunch followed as we continued to get Odi updates that there was a debriefing, then a meeting, and he was still coming. Finally after hours along these lines in the midst of the contradictions of some of the fanciest mall shops I have ever seen while waiting for the union meeting that was going to be held there, we were met and then let through the parking garage first to the small union office in the mall parking lot itself and then wending our way up three flights of stairs and across the shopping area of the fancy department store, we found ourselves behind the scenes around a table in a back office, which management had provided for this purpose.

This union was rank and file all of the way and once we started talking we found ourselves among true friends and comrades. We met the chairs of various councils and “plant” or branch level chapters. My favorite was the head of the Hyatt Council who now coordinated contracts at 7 Hyatt Hotels in Indonesia. I told him about my experience with the Hyatt in New Orleans over the last 20 years and said that I would be looking for his help to give me some leverage, if we went after them again. Through the interpreter he told me he was moving all of the contracts together next year. He probably thought I was joking, which would be a mistake on his part.

This visit had an added treat when we opened the Jakarta Post this morning to find a picture of Barbara and some of the FSPM folks at the rally as she thanked them and offered our support. The Organizers Forum is page 2 news in Jakarta!

Brother Odi and Barbara Bowen of the Organizers Forum
Stop!!! 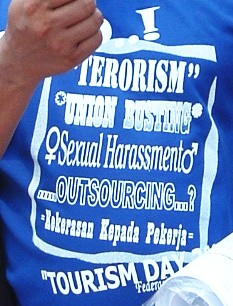