Indianapolis       In Boston the other day, Brother Mike Gallagher and I were talking about the lessons we had learned reading John M. Barry’s great book, “Rising Tide: The Great Mississippi Flood of 1927 and How it Changed America.” Barry gave the inside story on how the city worked then, how the levees were blasted to flood some parishes and save the city, and the politics both down south and up north that set in motion the steps to keep the River out of the city for the future.

It was with interest that I noticed Barry’s piece on the op ed page of the New York Times a day after we had talked on Thursday, October 13th. Barry reported that he had headed a flood control group at the request of the Louisiana Congressional delegation that had been one of several inquires looking at the why of 2005’s flooding, rather than 1927’s disaster. He indicated that three teams had already looked at this critical question that is at the threshold of any decision on rebuilding the City. One was headed by the National Science Foundation with the American Society of Civil Engineers, another was from the US Army Corps of Engineers, and the third had been led by scientists at the LSU hurricane center. All three of these teams working separately had come to the same conclusion:

“Hurricane Katrina hit Lake Pontchartrain with far less strength than it did the Gulf Coast, and the storm surge fell well short of the tops of the levees. In fact a design or construction flaw caused them to collapse in the face of a force they were designed to hold. In other words, if the levees had performed as they were supposed to, the deaths in New Orleans proper, the scenes in the Superdome and the city’s devastation would never have taken place.”

So, who is to blame for all of this? Barry minces no words — it is not the Orleans Levee Board. It is no one other than the U.S. Army Corps of Engineers. They designed and built the levees. As Barry says plainly:

“…entirely the responsibility of the federal government, through the Corps of Engineers.”

Is the situation hopeless then, just because the federal government has once again deserted the City of New Orleans and its responsibility? Barry’s group came to the opposite conclusion:

“Scientists believe that all of New Orleans, including the Ninth Ward and the parishes flooded by the Industrial Canal break, can be protected against hurricanes. Plans for that already exist, but in the wake of the Hurricane Katrina failures, they need close re-examination…”

Barry and his working group believe a new flood control plan could be prepared within 4-8 months, and “…that work on repairs to levees that would certainly be included in any comprehensive plan is already under way.”

Why are we not hearing more from these calm and certain voices?

Why can we not hold our government accountable still to protect our citizens and ensure the public safety?

At the least I thought America stood for the protection of property. If that is not a Republican value, what is?

The levees broke. The city flooded. Lives and property were lost. The Army Corps of Engineers is responsible. This needs to be made right. 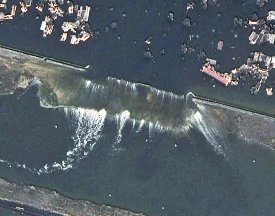