Indianapolis       Scott Hagy, who readers will remember rolled in from Wyoming to save the day at our offices and houses, has now jumped into the big time. By helping our next door neighbor, Monique, who runs the bed and breakfast from afar (Brooklyn!), he found himself not only with a place to stay in the back cottage, but also mentioned in the New York Times yesterday:

B & B’s See a Future
The New York Times

Glenn Pogue and Monique Greenwood returned to their New Orleans bed-and-breakfast after Hurricane Katrina to find a tree blocking the front entrance.

WHEN Monique Greenwood and Glenn Pogue bought the New Orleans
mansion that was to become Akwaaba in the Bayou
bed-and-breakfast, they didn’t give a thought to high ground,
levees or storms.

"If you’d asked, I couldn’t have told you the difference between
a hurricane and a tornado," said Ms. Greenwood, who runs the
couple’s four Afrocentric bed and breakfasts; the others are in
New York, Washington and Cape May, N.J.

Then, less than two months after their grand opening last July,
Ms. Greenwood locked up Akwaaba in the Bayou and left New
Orleans to ride out Hurricane Katrina at Akwaaba Mansion, her
bed-and-breakfast in the Bedford-Stuyvesant section of Brooklyn.
She expected to return in a few days, but soon found herself
preparing for the worst.

She wasn’t alone. Although New Orleans is home to many
well-financed corporate hotels, it’s also thick with at least 50
small, single-owner bed-and-breakfasts. These homey inns appeal
to travelers who want to connect with the curious local culture
and perhaps save money. The lodgings are an integral part of New
Orleans that many fear has been threatened by the devastating
economic effects of Katrina.

The bed-and-breakfasts rarely have more than five or six guest
rooms and charge $125 to $250 a night, leaving them particularly
vulnerable to the lost income. With bills arriving, no guests in
sight and disputes with insurers, prospects for
bed-and-breakfasts like Akwaaba can look shaky.

To Ms. Greenwood, the storm and flood suddenly rendered her
house’s location in the Bywater neighborhood, just three blocks
from the Mississippi River and a quarter mile from the breached
Industrial Canal, painful.

Several days and much worry later, Mr. Pogue found satellite
images online that showed that the floodwaters had stopped just
blocks from Akwaaba in the Bayou, which sits 10 feet above sea
level, about 25 blocks from the French Quarter. But Mr. Pogue’s
relief was tempered by the reports of looters, wind damage,
fires and mold that dominated the news. At one point, a reporter
called and said he had seen a group of men having a pool party
and barbecue on their property.

After several attempts to return to New Orleans were thwarted by
new storms and confusing re-entry rules, the couple caught the
first commercial JetBlue flight back to the city on Oct. 1. The
airport was hushed, and smelled of mildew as Ms. Greenwood and
Mr. Pogue collected their bags, one of them weighted down by
tools, nails, food, and water.

At the Budget Rental Car office, a police officer asked Mr.
Pogue if he was armed.

Startled but worried that they might have underestimated the
potential threat, the couple headed toward New Orleans, hoping
to beat the setting sun. Abandoned boats and overturned buses
lined the road, but it wasn’t until the couple dropped from the
freeway down into the city that the devastation became clear,
with collapsed buildings, cars on porches and not a single
person evident.

"It’s so desolate; I’m getting anxious," said Ms. Greenwood as
she swerved to avoid a downed palm tree at Desire Street. She
parked in front of Akwaaba in the Bayou and the couple silently
surveyed the damage from inside the van. A tree blocked the
front steps; the upper porch swing had knocked out a railing;
and windows were broken. There were downed trees; a swimming
pool full of black water; ruined brickwork; missing roof tiles.

Inside the graceful, high-ceilinged mansion, everything was
basically intact, though rotten apples sat in a bowl, and
mosquito larvae swarmed in stagnant water at the bottom of
several flower vases.

They found a note:

"Dear Owner, We borrowed a broom from your home. We are located
one block up @ the school."

It was signed: "The Oregon National Guard."

That explained the military Meals Ready to Eat containers
littering the sidewalk. It also helped explain why no one had
broken in, and why, despite the officer’s warnings, their
neighborhood felt safe, if empty. "I feel really fortunate,"
said Mr. Pogue.

Akwaaba fared better than some other New Orleans
bed-and-breakfasts. Bougainvillea House, in the French Quarter,
suffered roof damage and a downed wall. The 17 tortoises the
owners had tended since the 1950’s, survived, but a collection
of 30 bonsai trees died along with the income from the house’s
two suites. Like other establishments, Bougainvillea House has
had to refund deposits made on reservations that now can’t be
honored.

THE 1896 O’Malley House, in the Mid-City neighborhood, was
flooded with more than a foot of water, and the owners, Brad
Smith and Larry Watts, said they would have to replace all the
sheetrock, redo the wiring and buy seven new condensers for
their central air-conditioning.

Though most banks are giving a three-month grace period for
mortgage payments, after that time missed payments must be paid
in full. "It gives you a knot in the pit of your stomach," said
Mr. Smith, of the 1896 O’Malley House, echoing the feelings of
many innkeepers.

"I don’t think we’ll see tourists for the next few months," said
Susan Smith, of B and B Inc., which handles reservations for
about 20 New Orleans establishments.

She says that so far, no bed-and-breakfasts have closed for
good. Many are hoping to house journalists, disaster workers,
insurance adjusters or employees of the Federal Emergency
Management Agency. "Most of the owners seem enthusiastic," said
Ms. Smith, "even with all the unknowns."

Ms. Greenwood and Mr. Pogue pondered a big unknown – where’s the
electricity? – over candlelight on their first night back.
Later, they drove to the French Quarter, which had electricity,
looking for food. A few sex clubs and live-music bars gave life
to the depressed atmosphere along Bourbon Street, which smelled
of trash and sewage. The innkeepers ordered sandwiches at the
venerable Clover Grill, where a man ate at the counter with a
large pistol strapped to his thigh. Out the window, a Humvee
full of National Guardsmen passed, trailed by a built-up swamp
buggy carrying a load of off-duty disaster workers, some sipping
chartreuse-colored cocktails called Horny Alligators. Nearby, a
young couple were kissing next to an overflowing garbage can.
Ms. Greenwood and Mr. Pogue cited the bizarre confluence of
disaster and drunken celebration as evidence that the crazy city
they love would definitely return.

Back at Akwaaba, they got out their flashlights and headed for
bed. The mansion was stifling because the doors and windows were
shut to keep mosquitoes out, and without electricity, the
air-conditioning was only a memory. In the morning, the couple
bathed in cold tap water, hoping that it wasn’t contaminated.

The couple heard an engine outside. As if sent from heaven, a
contractor from Wyoming named Scott Hagy appeared from out of
the blue with a truck full of tools. He offered to help with the
pressing repairs and the cleanup at Akwaaba. By the next
morning, all the debris had been cut up and piled at curbside,
and a few cars were seen on the street, as a trickle of locals
returned home to see what they had lost. Mr. Pogue had covered
the broken windows with plastic and plywood, and Ms. Greenwood
had cleaned the patio and porches. They made arrangements with
Mr. Hagy to cover the damaged roof with blue plastic, drain the
pool and make other repairs in the coming days.

For now, the innkeepers had to return to Brooklyn to attend to
their small bed-and-breakfast business. They planned to return
within two weeks to complete the cleanup. And as soon as the
electricity came on, they would start trying to fill their
rooms.

"I am blessed," Ms. Greenwood said as she headed to the airport.
Much of the city had recently been plastered with mysterious
graffiti reading "Voodoo today here now 5." But Ms. Greenwood
didn’t feel hexed.

"I think everything is going to be O.K.," she said. 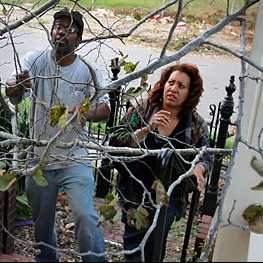