New Orleans            Politics in Louisiana and New Orleans in particular has never been a spectator sport.  It has been a rough and tumble, no holds barred affair high on participation and requiring lots of players.  Turns out one of the things going on in post-Katrina Louisiana is a wholesale effort to destroy democracy whenever the opportunity presents.

* Election postponed by Governor Kathleen Blanco “indefinitely” for the City of New Orleans.  Previously scheduled for a 1st round on February 4th and a runoff on March 4th, now no date, no time.
* Postponement according to Governor Blanco was at the recommendation of Secretary of State Al Atar.  His commitment to the election process and its democratic fundamentals is rooted in the fact that he is serving as Secretary of State on appointment by the Governor to replace the elected Secretary of State.  Al’s recommendation is also that there never be another election for Secretary of State.  He believes — this will not surprise — that the position should be appointed.
* The Mayor’s whitewash, business rebuilding committee commissioned the Urban Land Institute (ULI) to make some recommendations, but ULI does not want individual citizens and property owners to vote, it wants a “community” decision above them.  ULI also wants an appointed committee to take over the city’s finances and the rebuilding effort.  Oh, right!
* Governor Blanco suspended any votes of parents or teachers on the creation of charter schools in New Orleans by executive order, so that now the city will soon be a “hybrid” model and the largest, autonomous charter school site in the country.
* Tulane University President Scott Cowen as head of the rebuilding schools committee has recommended that — another big surprise — the New Orleans school board no longer be elected, but instead from now on be appointed.

The “new” New Orleans seems to fast be on the way to becoming a model of business and elite fascism along the River.  Citizens only exist now as taxpayers, not as voters.  Pay up and shut up is going to be the new motto for the city.

This rebuilding New Orleans sure is going well, isn’t it?  The debris of the storm-troopers will take years to clean up. 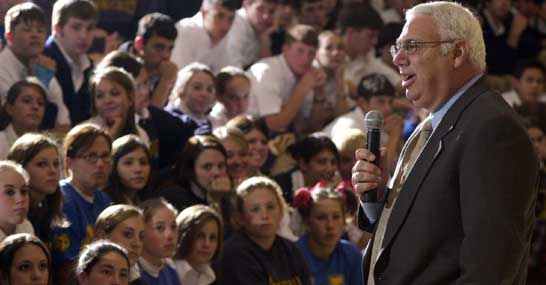