Aguascaliente         While here in the high desert of Aguascaliente, wondering in the aridity of winter, how hot it might feel in the summer, water still comes naturally to mind, and not just hot water, but all water. Receiving an invitation to fly to Banda Aceh to participate in a commemoration of the one-year anniversary of the “Christmas” tsunami and an evaluation of the organizing and efforts to date, made me wonder exactly how much had been done to date and what it also might auger for New Orleans in the wake of its own storm?

An article in the Atlanta Journal-Constitution on 12-26-05 looked at some hard estimates on housing numbers. 308,000 houses are needed, and according to their report, 46000 have either been built or are under construction. The BBC World News from the same date indicated that 25,000 houses have been built. Sounds like anyway that one looks at the question, less than 10% of what needs to be done, has in fact been done. The Urban Poor Consortium, which the Organizers’ Forum (www.organizersforum.org) delegation had visited in Jakarta in late September had been responsible for working with fisherman to build 2500 houses in a year through its own efforts.

In New Orleans over 100,000 houses need to be repaired or rebuilt. Seems small in comparison, but there are lessons, it would seem in Banda Aceh, or at least there are things that seem eerily familiar and auger poorly for the future. In Banda Aceh the province reorganized in order to rebuild and changed radically the way it related to the nation. In New Orleans it almost seems that no matter whether the government drifts right or left, it still can not make a deal with the federal government, which is where the money lies.

Looking at a report from the United Methodists by their reporter Linda Bloom,
I also find issues that seem close to home:

But the relief and recovery work has been complicated, according to the Rev. Paul Dirdak, UMCOR’s chief executive.

“The disaster destroyed a very thin strip of property in a rural province where people lived on the beach but a very wide path in one coastal city,” he said.

In the rural area, it has not been so hard to determine property ownership for rebuilding purposes, Dirdak explained. But in a city such as Banda Aceh, where “such a wide range of pieces of property were destroyed,” along with property records, the task has been formidable.

“All the NGOS (nongovernmental organizations) are having a very hard time proving their beneficiaries’ right to build a house in a particular place,” he said.

Other complicating factors include a strain on resources for building materials, such as lumber; the large number of outside organizations helping with recovery, slowing down the permit process; and the ongoing political conflict, which has been assisted by a peace accord in August.

The fight in New Orleans to get site control is central with developers and sharpies of all persuasions trying to take away the voice and rights of citizens and property holders, and these same citizens trying to be allowed to exercise their rights and rebuild. Wardah Hafiz from UPC had told us earlier in words that echo so many neighborhoods in New Orleans from the Lower 9th to Hollygrove that the fishing families wanted to rebuild near the water, while the government, some NGO’s, and others, argued that the rebuilding should be only on the higher ground away from their work and livelihoods. Finally, UPC’s project began simply working with the families to help them build houses where they wanted them forcing the fait accompli to make the policy, rather than allowing the stalemate to continue. This seems so reminiscent of ACORN’s own efforts now in the fight against the Urban Land Institute neighborhood destruction programs to prove in our Cleanout and Demonstration Project that houses are sound and can — and should — be rebuilt!

Waiting just seems deadly for people’s hopes for housing. Linda Bloom quotes an Oxfam release from 12-14-05 which demonstrates how much can be lost in waiting:

….Oxfam International said that providing shelter for those displaced by the tsunami has been its biggest challenge. Oxfam received $278 million in donations for its tsunami aid effort and will have spent around $127 million by the end of the year.

Oxfam’s progress in Aceh, for example, has been hampered by the fact that some land is still under water; by the government’s slowness to allocate land for rebuilding and to clarify coastal buffer zones; and by limited access to devastated areas due to lack of infrastructure. The uneven progress means some people already live in permanent houses while others remain in tents.

So much money and so little to show for it! The stories we heard in Indonesia about hotels with all 50 rooms rented for months on end to Oxfam paid at NGO rates, while their local staff was paid at local rates, seems to be making them the “red cross” of that situation. Drowning in resources, but waiting, waiting, waiting, partially because they lack a base in Indonesia, it would seem. A UPC that can organize at the grassroots level can make things happen — lots of things — with just a smidgen of the resources. Wardah told me when we visited that their entire budget for the Banda Aceh project was a whopping $12,000,000 USD, which is a lot of money, and yielded a lot of houses thus far.

I wonder if anyone appreciates the difference building a base and an organization can mean in allowing something to really get done?

It also looks like the recovery in Banda Aceh will take a long, long time. Unfortunately, the same seems true for New Orleans, especially since we seem to be learning nothing much from other disasters. 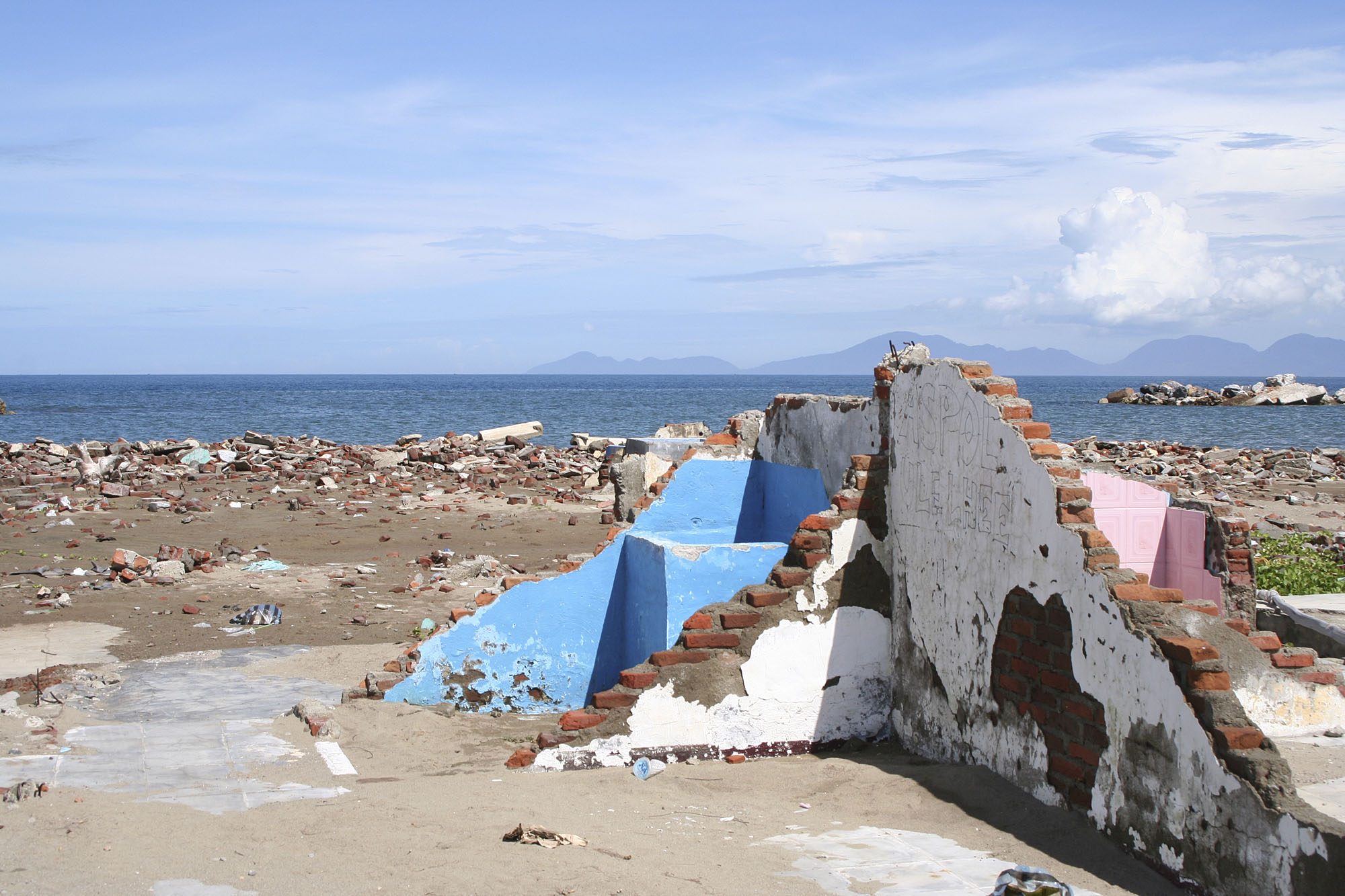 Graphic scenes of the tsunami remain in this harbor in Banda Aceh, Indonesia