New Orleans     Likely passed 600 houses on the clean-out program in New Orleans. We had some excitement though on Friday, when our field foreman, Rev. Brian Lewis, reported that two of the volunteers had asked if they could be married that afternoon on one of the job sites.

She was from Seattle. He was from New York. They had been dating for eight years.

No problem. We are running a full-service operation it seems. We had a cake. Both of them looked very happy in the picture.

The headline over the picture in the Times-Picayune said LOVE FLOWS FROM ACORN. 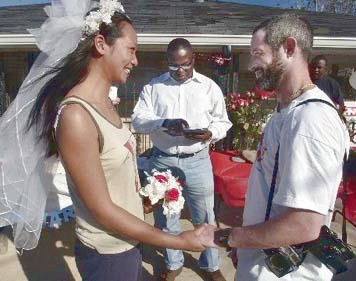