St. Petersburg         Last night I sat with a distinguished panel of professors, lawyers, and newspaper columnists answering questions about the conditions of the working poor of New Orleans both before and after the storm.  It was the 4th part of a series examining the impact of Katrina on the city.  The first three parts on New Orleans culture, communications, and environment had been swelling affairs with 700 or more folks crowding into the auditorium to hear what was up.  Perhaps only at a Jesuit university would one even have a segment on the working poor, and, god knows, few of the students could have wanted their futures after Loyola to count them in that number, nonetheless there was a healthy crowd of 300 or 400 people.

The panel included myself, Alan Berube (Metropolitan Policy Fellow, The Brookings Institution), Jarvis DeBerry (columnist, Times-Picayune), Angel Parham (Assistant Professor of Sociology, Loyola University) Mary Pattillo (Arthur Anderson Research Professor of Sociology and African-American Studies at Northwestern University),  Mark Robert Rank (Herbert Hadley Professor of Social Welfare at Washington University) and William Quigley (director of Loyola’s Gillis Long Poverty Law Center). Grabbing the program as I left the office, I assumed the deal would be a couple of minutes at the far end of the alphabet to the survivors who had weathered such a large number of panelists.  Instead upon arriving it turned out to be a situation where questions were tossed out to the panel and then a free-for-all of answers and opinions.  I was ok with that.  Having wasted no time in preparation, it turned out that I had not wasted my time in preparation!

As I left the office, I had been cautioned to not “go Katrina,” and to try and behave.  How hard could that be?  Very, it turned out.

My first comment was a standard addition recitation from 25 years of organizing hospitality workers and the statistics on the stranglehold that the industry and its informal, low wage, part-time nature has had on the economy, sentencing the city to existence as a low wage, service sector swamp.  How could anyone disagree with that?  In fact no one could.

When the questions got structural though, I found myself in a silent seethe as one of two of my compatriots on the dias began to rail at the sad state of the city’s public school system.  Eventually, it became a full-panel pile on with everyone tire kicking the schools, as if they were the hidden clue to the structural problems of unemployment.  After all was said and done I apologized for sitting in a college setting among mainly professors and students and having to say that my view was that in fact the economy had dictated exactly the kind of education system it wanted and was willing to finance and had decided that it didn’t want men and women washing dishes and making beds to be deep thinkers and scholars.  This also explained why a poor, broke ass city and its citizens always were able to finance a dual system of public and parochial/private schools that was almost equally sized.  It also to my mind explained why magnet schools, like my own public high school Benjamin Franklin had as their main mission and job, training students to leave the city to work.

To my shock there was actually applause when I finished my rant.  To my greater surprise the most conservative of the gang, Jarvis Deberry, a columnist for the Times-Picayune, kept phrasing his comments more often in agreement than disagreement with me through the night.

It went on that way all night.  The crowd actually seemed to care what Bill Quigley said about public housing tenants.  Some of the scholars were dead on in their indictment of the lack of civic and economic leadership.  Some of the questions from the audience raised other issues like health care that didn’t add up.

Better keep this crowd on campus, because if they were let loose as voters and activists in the city, they just might line up on the right side!

Read The London Times article about the continued devastating situation in New Orleans and the upcoming Mardi Gras. 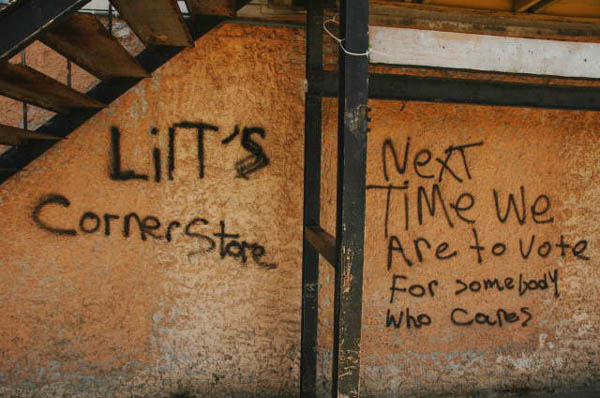 The writing on the wall. Poland Avenue at the bridge to the lower 9th Ward. (Photo taken by David Rae Morris) 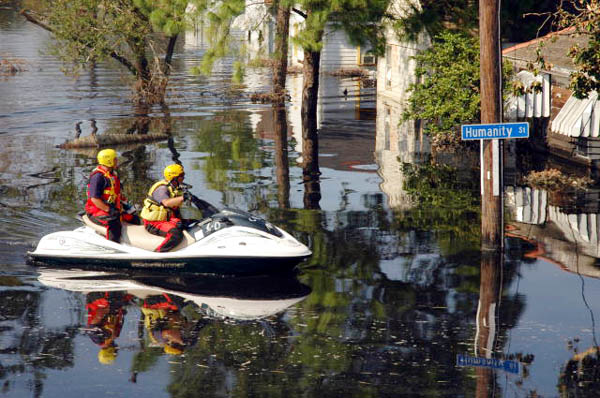