Lima       Visiting with our great organizing staff over the weekend and today in our office in Lima is always an exhilarating experience with a lot of catch-up on problems both big and small.

Invariably, the conversation led to the upcoming national elections.  Somehow President Toledo against all odds has survived with popularity often moving towards single digits and not over 20% for years to complete his six year terms in a statement about the commitment of Peruvians to democratic norms, if nothing else.

And, now comes the deluge!  There are 24 different party lists for President for the April 9th election.  There will be a run-off after that election.

The leading candidate is Lourdes Flores, who could become the 1st woman president here and following the recent election in Chile one of the path setters in Latin America.  Her platform is a coalition amalgamation between the middle and left.  She has enough populist appeal to argue that government should be created from the grassroots, but this is not Evo Morales or Hugo Chavez, but a middle-of-the-roader with a bit of a tilt.

The polls indicate she could get 35% of the general vote, and in one-on-one face-offs she would win by 61% to 39% over her closest rivals.

One of the top three in the poll is Alan Garcia, a former pre-Fujimora President, who is trying one more time and is locked down at around 17%.  He seems younger than one would expect in his television appearances.  Politics is a lifetime career it would seem.

Fujimora tried to see if he could get another hurrah, but made it as far as Chile where he’s cooling his heels in jail unable to get back into Peru, which is trying to extradite him to face the musica here in Lima.

Are there issues in the campaign that are moving people?  Nothing huge has emerged yet, other than the desire for change itself.  What are Senora Flores positions?  My crew was at a loss to tell at this point.

Visited with Luis Isarra Delgado, our old friend and the President of FENTAP, the nation federation of water worker unions, about how labor was playing this election, particularly the affiliates of CGTP, the largest and leftist of the central federations.  He told us that they did not like any of the top four candidates in terms of their positions.  They were trying to see if they could make a deal with someone, maybe even Garcia and OPRA, to see if they could be a kingmaker.  Politics is always convoluted in every country.

With 7 weeks to go until the election, it will be interesting to see if she is pushed to be clearer?  If not, she could face the same short honeymoon felt by Toledo, which makes it hard to govern.

It’s one thing to run on inspiration and aspiration, but it doesn’t take long before the people demand results and realize that symbols of change are different than change itself. 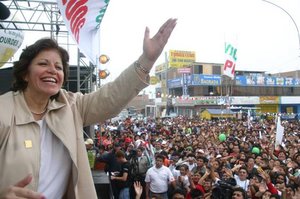 Lourdes Flores, a leading candidate in the Peru presidential election, whom, if elected, would be Peru’s first female President