Day after day young workers, students, and unemployed French youth have hit the streets to protest a change in employment law proposed by Villipen, the French premier.  In the face of unemployment rates for youth pushing to the 30% level, the policy argument was that the weight of the many worker-protection laws in France was preventing employment.  The solution proposed by the government was essentially to allow a “free-fire” provision.  Within the first 2 years of employment for the young, you could be realized without cause and without any reason given.

The students and others were joined by the labor federations in France, who despite only representing 8% of the workers, continue to have significant tactical strangleholds in transportation and the public sector.  Unions also undoubtedly understood that erosion of their hard won legal protections for workers would accelerate the drop on the slippery slope.

The pundits and papers have been dismissive of the protests in the U.S. in a predictably patronizing way.  There was an insulting article in the New York Times seeking to ridicule students participating in the daily demonstrations and strikes because they also were forced to take a break to take exams or do laundry.  Huh?  Why is that hard to understand after 10 days of non-stop actions?  Furthermore, what does it have to do with anything?  It’s just an anti-youth, anti-French, anti-protest wisecrack.  A cartoon reprinted in the Sunday Times was along the same lines seeking to brand the actions as trivial.

And, when not branding them trivial, observers have sought to label them as reckless and irresponsible by raising the specter of the suburban, largely ethnic riots of the unemployed around Paris several months ago.  Somehow direct action to prevent a retreat in law by students and workers could trigger a renewal of riots by unemployed youth in the suburbs.  Hello?  Perhaps the issue is jobs, not protestors and their tactics?

President Chirac has blinked by trying to cut the period to 1-year and require that young workers be given the reason for their dismissal.  Drawing lessons from the settlement of the 1968 student strikes, the government couldn’t sweeten the pot with new benefits as they did then, but was trying to at least push it from boiling to simmering.  Students and unions immediately dismissed the compromise and continue to push forward.

Something may be happening around the world, so rather than being haughty and dismissive, perhaps we should all follow all of this more closely.  We are talking about a worldwide movement seeing to erupt around globalization.  One country after another is changing governments in Latin America — democratically! — to resist the impact of jobs deterioration.  Now we have an outpouring in the US around immigration, which is still largely about jobs, and now in France another outbreak, once again about jobs.

To even see the French government looking back at the 1968 playbook should be a signal to us all that this may once again be a time for us to take a look at the prospects for movement. 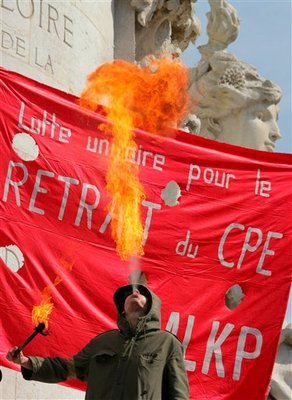