New Orleans             As part of the grist for the mill, I thought I would share a couple of pointed — and poignant — notes that came over the transom to me this week.  The first is from Orell Fitzsimmons who is SEIU Local 100’s Organizing Director based in Houston on the even of the May Day call for no work for immigration rights.  The second is from Jim Lynch, formerly mister everything in city and county government in Little Rock and Pulaski County, letting me know about the death of Roger Mears who was a Pulaski County Judge we worked with closely in the 70’s.

Just got a call from a GCCSA Hispanic  member saying she was not going to work on Monday to support  ‘her people”, she wanted to know if she could be fired, she asked for the time off and the center director said no. I told her to call in sick on Monday, I asked if she was going to a protest some where? She said she was just staying at her house in support of “her people”. She will call if any thing happens to her.

Got a call Friday from 4 food service workers at HISD Marshall middle school saying they were not coming in on Monday, they had a meeting with the principle as group, I didn’t get the results, but spoke with the black food service manage who was supportive but concerned about feeding  the children, I told her I would call her at 7 AM and if she needed help I would come over and pitch in, she said with that kind of attitude that “she might just become a member of our local, I said I would bring her a union card on Monday.  What a day, 45 year old Hispanic women standing up with a group demanding justice with the only thing they have, their labor.  There is something going on in this country and it’s a good thing…………………….

Roger Mears died late yesterday (Tuesday, May 2nd) afternoon here in Little Rock.  I thought surely you would want to know.  His youngest daughter called me about suppertime and told me he died at home with his family present.  He was 80.  He had returned home after eight days in the hospital  —  he had several complications of old age.

I know you know all the Roger Mears / Max Allison stories as well as I do and some I don’t know.  Max and Roger were quite a team, I know you would agree.  In the hours since I got the telephone call with the sad news I dragged out some old newsclips and other stuff and reminded myself of the great battles with County Judge Mackey, the packing of the Quorum Court, the county budget, the election triumph over George Wimberly, Chuck Rhodes and the County Equalization Board tussle, courthouse fight with Lee Munson, etc.

In all of these episodes somehow ACORN was either a central or otherwise vital player, sometimes center stage and sometimes maneuvering in the wings.  In my judgment Roger was a very good man and he had a unique way of giving opportunity and courage to others to get good stuff done.  ACORN got an early lift from Roger and Max and I hope you agree it was, and still is, very important to the success of the organizing effort.

Max departed a long time ago (1984) but I know he and Roger are no doubt somewhere in heaven, meeting at a coffee shop and Max is puffing on a cigarette laying out the “grand equation” and Roger is listening and figuring out the means to implement the plan.

I miss both of them.  I almost wish I could be part of their coffee shop plotting today.

I have only one thing to say to both of these old comrades — AMEN! 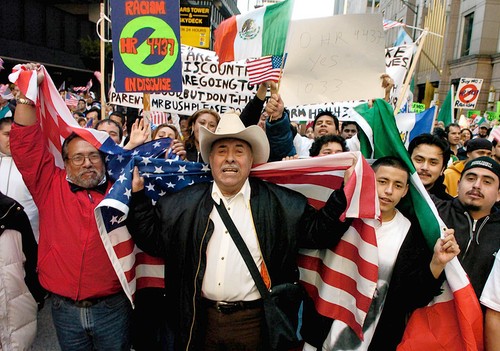 One of many rally’s for immigrant rights