New York     Some follow-ups from earlier blogs and footnotes along the way….

* We lost the property tax election in Mesa, Arizona not surprisingly by a 60-40 margin in the final count.  The news came to me this way:

I am the author and sole creator of YesForMesa.us. I was interested to see that you featured it on your blog, and wonder at your casting it as ‘fabricatd’, ‘scurrilous’, or anything other than the research results and opinions of myself, one lone citizen. What could be more ‘grassroots’ than this?

If there is information that you feel is incorrect at YesForMesa.us, I am ready to correct it. Other than unintended and reasonable mistakes, typos, or syntax, I am not aware of any, nor would I have included them were that the case.

By the way, I want to inform you that the Property Tax in Mesa did not pass, despite what I see as the sincere but misguided efforts of Mesa ACORN, pro-tax advocates, and others.

Mesa stands proudly as a model to the rest of the country, as the largest city in America without a property tax.

Frankly, it’s not an argument worth having with Mr. Hopkinson and now water under the bridge until the next round.  Be interesting to see how Mesa does over the years in figuring out a way to balance the books and build city services as they grow.

* Beacon High Yesterday on the way to the airport after meetings in Brooklyn and Manhattan, I stopped by and did a favor for a friend, Bob Master, the legislative and political director for Region 1 of the Communications Workers of America (CWA).  Bob has been a steadfast partner of ours in building the New York Working Families Party, more recently on our efforts to organize home child care workers in New Jersey, and a comrade in arms for decades.  He asked me to speak to the New Orleans Rebuilding Club at this progressive, public high school on the West Side where his son attended.    About 50 of these kids had come down to New Orleans during a spring break to help do house gutting, and were somewhat confused and demoralized about how it all added up and what the real future of the city might be.  Partly they had also been in the middle of inexplicable antagonisms between some of the various groups working in the area and needed a way to piece the puzzle together.  For an hour I largely answered questions, and the questions were excellent both on politics, organizations, and the mechanics of rebuilding.  Perhaps as moving to me was the pleasure of standing in a basement in public school in New York City with 25 young people who passionately cared about New Orleans!  Hardly mattered to me that they were confused by their experience, they were still committed to coming back to New Orleans and to their idea of being part of a city rebuilding.  We have to harness this somehow.  It’s a huge asset for the long term future of New Orleans.

* Finally, here’s one to wrestle with for a while.  I was visiting with Eric Eve, an up and comer, we deal with at Citicorp and we were sharing thoughts about Brazil and India and how we look — from opposite sides of the fence — at markets.  Over at Citi they are running to catch up with a demographic projection that holds that within the next 5-10 years the middle class (based on various definitions) will expand globally by 700,000,000 people.  Reading Mike Davis startling recent book called Planet of the Slums, about the billions of expanding poor families on the downside of globalization and urbanization, one forgets that at the top of the food chain the part of the glass not emptied leaves a huge swallow for multi-nationals to build when one looks at this huge number and home mortgages, credit cards, and god knows what else that it will fuel. 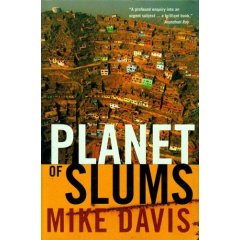 “Planet of the Slums” by Mike Davis