New Orleans     I met Adam Werbach over a bowl of noodles in Kyoto, when I was there for the World Water Forum some years ago as part of a delegation sponsored by the Panta Rhea Foundation telling the story of the New Orleans fight against water privatization.  I met some great people on that brief trip and built on many relationships that were casual previously (Tony Clarke and Maude Barlow among others from Canada like Karl Fletcher and Anil Nadoo, Luis Delgado who has become our long time ally from FENTAP in Peru, David Boys and the whole Public Services International gang, and many, many more), and Adam was one in the list.

Adam had a bit of fame in the U.S. as the youngest person elected president of the huge environmental juggernaut, the Sierra Club (www.sierraclub.org) when he was 23 and stepped into the ring.   He had founded in 1991 a student environmental group while in college.  Now 11 or so years later he had continued to be a voice in that movement as well as someone continuing to be part of the progressive forces.

The article below in the New York Times accompanied with Adam’s picture was a surprise.  Read it for yourself, but it seems to say that he is on the verge of going to work for Wal-Mart.  Furthermore his work would seem to be not only making recommendations for the continuing “greening” of the company, which has been a huge public relations initiative but also, if I read it correctly, to essentially advise the employees on how they can improve their personal health.  The latter would seem to be an initiative designed to rationalize Wal-Mart’s notoriously penurious to non-existent employee health benefits by covering that failing with the thin sheet of personal responsibility.

From the article it seems to say that this is not a done deal.  I wish I knew Adam better, perhaps some of the readers do, because this would seem to be a deal best avoided and a paycheck worth returning.  Frankly, Wal-Mart can not be given safe harbor on employee health care or on other issues as well.

The spokesperson for Wal-Mart Watch (www.walmartwatch.org) makes the accurate point that certain Wal-Mart has the money to buy up many of their critics, rather than making real change.

True that, but the company has to get the message, and Adam would be a good person to send it, that not everyone is for sale!

Wal-Mart Effort on Health and Environment Is Seen

Trying to become a leader on two issues that have bedeviled it for decades, Wal-Mart Stores is developing an extensive program to teach its 1.3 million employees in the United States how to take better care of themselves and the environment, people briefed on the plans said yesterday.

The program, still in the planning stages, is an effort to turn Wal-Mart’s work force — the nation’s largest — into a model for its customers on issues like energy consumption and nutrition, these people said.

It is also a strategic shift for Wal-Mart. Until now, the company has focused its environmental efforts on creating eco-friendly products and stores and its health care initiatives on devising more generous insurance plans.

The plan, tentatively called the Environmental Health and Wellness Program, will emphasize practical advice, like replacing traditional 60-watt light bulbs with energy-efficient bulbs that use 13 watts; Wal-Mart stores already carry those bulbs. Another suggestion under consideration is to eat more fish for the health benefits.

Those who spoke about the plan did so on condition of anonymity because they were not authorized to speak about it publicly.

Wal-Mart declined to discuss details of the program. But in a statement, the vice president for corporate strategy and sustainability, Andrew Ruben, said, “We’re listening to our associates and getting feedback on what they need in terms of incorporating environment and health and wellness into their lives.”
For Wal-Mart, the program could help reduce health care spending on a work force that has higher rates of heart disease and diabetes than the general public. It could also improve the company’s standing among the image-conscious consumers that it is courting with higher-priced merchandise.
Wal-Mart hopes to provide the lessons in all of its nearly 4,000 domestic stores over the next several years, said the people who spoke about the plans.

“As we learn more,” Mr. Ruben said, “we look forward to developing additional programs to support them.”

The program, which has not been publicly disclosed, will be overseen by Linda M. Dillman, vice president for risk management and benefits administration, those briefed on it said.

To help develop the environmental part of the program, Wal-Mart has asked a former president of the Sierra Club, Adam Werbach, to be a consultant. Those negotiations are continuing, several of the people briefed said.
Reached by phone yesterday, Mr. Werbach declined to comment.
If he agreed to help Wal-Mart, Mr. Werbach would join an expanding list of environmental advocates who have advised the company on how to improve its record on issues like greenhouse-gas emissions and fuel efficiency.
The Natural Resources Defense Council and the Rocky Mountain Institute are both working with the company. But Mr. Werbach’s choice is unusual because he has publicly chastised the company. In “Act Now, Apologize Later,” Mr. Werbach’s 1997 book about activism, he compared Wal-Mart’s growth to a “virus, infecting and destroying American culture.”

Mr. Werbach now runs a San Francisco firm called Act Now Productions, which consults with companies and nonprofit groups on how to use video, the Internet and music in their marketing. On its Web site, the company lists the Sierra Club and the National Wildlife Federation as clients.

In the past, Wal-Mart has come under sharp criticism for its health insurance and environmental practices. State governments alone have fined Wal-Mart dozens of times for violating rules on storm-water runoff and air pollution.
But in the last year, the company has introduced significant changes in both health care and environmental policies. Those include sweeping commitments to reduce energy use in its stores, improve its trucks’ fuel efficiency and minimize its use of packaging.

Nu Wexler, communications director for Wal-Mart Watch, a group critical of the retailer, said that Mr. Werbach “brings a huge amount of responsibility, and his reputation within the environmental movement will be on the line.”
“Wal-Mart,” he continued, “has the resources to hire every environmental activist who has ever criticized its business practices but we hope they will pursue substantive changes versus cosmetic improvements.” 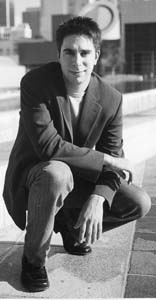