New Orleans     Not everyday there’s a story in the New York Times not just mentioning ACORN, but in fact it was all about ACORN.   Times national reporter, Erik Eckholm, visited Gary, Chicago, and New Orleans and filed a story about ACORN at 36 and growing.  Pictures on the website were in color and were fantastic!

City by City, an Antipoverty Group Plants Seeds of Change
By ERIK ECKHOLM

GARY, Ind. — The teller’s eyes widened as a customer poured thousands of pennies onto the counter, an intentionally obnoxious way to pay a high heating bill. Still looming in line at the utility payment center, on a street of boarded-up buildings in this rusted city, were 10 more people carrying hefty bags of pennies, all wearing the red T-shirts of the national community organizing group Acorn.

It was a pinprick protest, intended to grab the attention of utility executives over what members of this newest Acorn chapter charged was the company’s overly quick shut-off of strapped customers.

That same day in Chicago, scores of Acorn members and volunteers fanned out in lower-income neighborhoods, gathering signatures in favor of a law that would require giant retailers like Wal-Mart to pay employees $10 an hour plus benefits. In dozens of other cities, members lobbied for the rights of Hurricane Katrina victims, protested “predatory lending” and registered low-income voters.

With offices in 106 cities and a membership reported to be 200,000, Acorn has emerged in recent years as the largest neighborhood-based antipoverty group in the country, using old-fashioned methods of door-knocking and noisy protests to push for local and national causes. It plans to open an office in 20 new cities each year for the next five years, an expansion in response to the strong grip conservatives have in Washington and to the travails of the working poor.

“We feel the Acorn program is popular wherever we go,” said Wade Rathke, 57, who founded the group 36 years ago in Arkansas and goes by the title of chief organizer. “It’s like a hot knife in butter.”

Conservative critics say Acorn and similar groups are pushing antimarket, unrealistic answers that will not help the poor in the long run.

But the increased mobilizing efforts, often in alliance with the growing union movement among low-end service workers, have earned the attention of Democratic politicians.

The expansion of Acorn, whose formal name is the Association of Community Organizations for Reform Now, is part of a broader surge in populist organizing around the country centered on issues like wages, gentrification, environmental disputes and immigrant rights.

“Over the last 10 years we’ve seen pretty explosive growth in the number and scale of community groups working in poor communities and with people of color,” said Deepak Bhargava, of the Center for Community Change, a Washington-based support center for local organizers. Mr. Bhargava said the activism was “approaching a scale that could have a transforming effect on American politics and society.”

But the number of people involved is still limited, and while many groups share similar “social justice” philosophies, they are often fragmented.

Mr. Rathke said he had no illusions about the strength of “government policies promoting inequality.” But he added: “If there is going to be a change in politics in a progressive direction, we are going to be part of that. That wasn’t true 10 years ago.”

Mr. Rathke spoke at the bustling Acorn headquarters in New Orleans, where the group has sought to involve poor, displaced residents in the Hurricane Katrina recovery effort. He had just returned from a week in India, where he met with private groups worried about the possible entry of Wal-Mart and similar chains.

Acorn has a budget this year of $37.5 million, which does not include its spinoff research and housing organizations. Only $3 million of that comes from membership dues. Most of the rest comes from foundations, private donations and “partnerships” in which onetime corporate targets, like the Household Financial Corporation, pay Acorn to run programs, in this case to educate people about mortgages and loan terms.

Local offices pursue local issues of concern, like pressing an agency to clean up a vacant lot or, in the case of the powerful chapter in New York, opening schools and cosponsoring the Working Families political party.

What sets Acorn apart from most community groups, said Peter Dreier, an urban planning expert at Occidental College in Los Angeles, is its ability to combine local projects with coordinated national action on larger issues.

In a current campaign in several cities, for example, Acorn is demanding that the Sherwin-Williams paint company contribute to lead paint abatement.

The utility protest in Gary illustrates how Acorn creates a new chapter. Eric Weathersby, 43, is a church leader in Gary who wanted to get more involved in politics. After brief training in Chicago, Mr. Weathersby started as head organizer for Acorn in Indiana on April 17.

Heating bills soared last winter, and many poor residents resented their utility, the Northern Indiana Public Service Company, for what they saw as harsh policies for delinquent payers. Mr. Weathersby used the issue to recruit, going door to door himself, and by early June had 113 members.

Oscar L. Buggs Jr., 69, who lives on a pension from his career as a sanitation worker, was drawn in. He said he had inherited a house with past-due bills, had found himself owing $1,300 that he could not pay and had had his utilities cut off for several months. He used a flashlight to see at night.

“It seems like they do good deeds for people who need help,” Mr. Buggs said of Acorn. “Maybe I can do some good for somebody else.”

In early June, as members began unloading their pennies at the payment center, a company officer quickly appeared. He promised to relay to the company’s president Acorn’s demands for more aid to poor customers and a moratorium on shut-offs, and to try to set up a meeting with him.

In an e-mail response to a query by The New York Times, the company condemned Acorn’s tactics and claims.

“They use threats of protests and other attention-grabbing techniques to bully local utilities and get media coverage,” Tom Cuddy, a spokesman for the utility, said in the e-mail message. “Most of Acorn’s ‘demands’ are already addressed in existing assistance programs.”

The wage campaign in Chicago, where Wal-Mart is opening its first store this fall, had a visceral appeal for many residents and has gained the support in principle of a majority of the City Council.

Steven Malanga, a senior fellow at the Manhattan Institute for Policy Research and author of “The New New Left” (Ivan R. Dee, 2005), said this campaign, for a law tailored specifically to giant retailers, showed how out of step Acorn was with the national mood and economic realities. “The only thing such laws ever do is to deprive shoppers in low-income neighborhoods of those stores,” Mr. Malanga said.

Illustrating the philosophical divide, Madeline Talbott, a veteran Acorn organizer in charge of the Chicago office, said of Wal-Mart, “They’re the world’s largest employers, and if they can’t pay a living wage, who can?”

Ms. Talbott added, “If we’re going to have a middle class in the city of Chicago, we have to set some kind of standard in the sectors of the economy that can’t just move to China.” 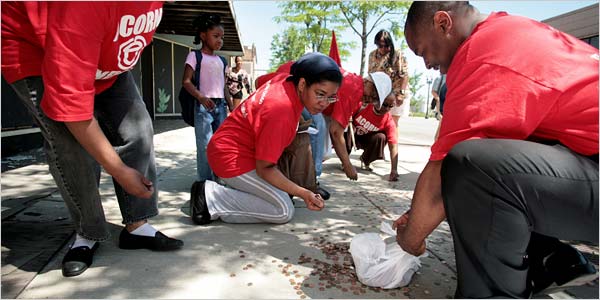 ACORN members In Gary, Ind. picked up pennies recently after a bag split on their way to a protest at a utility company.
LaTrell Smith, 26, an Acorn member in Chicago, asked James Meadows to support a living-wage law.
Adam Jamsa, 37, of Peoria, Ill., an Acorn member, rehearsed his door-to-door pitch for a living-wage petition with Rochelle Prather. 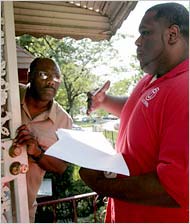 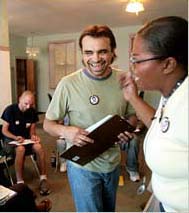