New Orleans   It’s hard not to read the business pages of the daily papers and not know who Warren E. Buffet is.  They fawn on his investment strategy.  Sometimes they call him the “Oracle of Omaha,” which I guess passes for a complement and high praise.  Put wild, crazy money in someone’s hands, especially if it’s the 2nd richest fella on the planet, and you are probably going to find a stone egomaniac to go with it.  That could be the case for Buffet, but somehow giving $31 Billion to his buddy Bill’s foundation, when he could have simply hung out a shingle and created the 2nd largest private foundation in the world makes you actually read the story behind all of this and think that just maybe he is different than the average bear.

On tv in front of everybody, Mr. Rich Beyond Belief says that:

“A market system has not worked in terms of poor people.”

First, it is a surprise that he would even care about poor people, since so many of his investments have supported the business model that produces exactly the poverty that is gripping the poor.  Secondly, he’s in danger of causing mass cardiac flutters in chamber of commerce meetings throughout the land who literally worship faithfully and without question the “market system” as the heartbeat of the capitalist enterprise.  Go, Chairmen Warren!

At a press conference he says:  “I don’t believe in dynastic wealth.”  He’s talking about inheritances and raising people up wealthy.  He calls such silver spooners, “members of the lucky sperm club.”  Quite a catchy turn of phrase!

The papers say he is still living in a house he bought in 1959 for $31,500.  No doubt it’s worth more now, but there’s something about this guy that speaks to values and grit.

Maybe he’s serious about doing something about poverty and worldwide health care and education?  Despite my native class prejudices, I’m going to have to give the guy the benefit of the doubt, because he sure is putting his money where is mouth is! 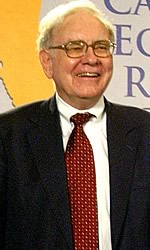