Los Angeles     Something important –and good — is happening for low wage workers, and, yes, Virginia, there are low wage workers even in New York State, particularly the home child care workers laboring under state contracts to provide day care for tens of thousands of working parents.  There are a lot of them — 52,000 home care workers — in New York.  They have had nothing but problems — low wages, no benefits, unsteady work and unstable working conditions, etc, etc, and then, more etc!

Finally, in a partnership last year between the United Federation of Teachers and its tough and visionary leader, Randi Weingarten, and their state and national organization, the American Federation of Teachers (AFT), and ACORN, after meetings for many, many months and much planning and strategizing, we embarked on what is turning out to be an important chapter in labor history for low income workers in New York State, and began organizing and enrolling home child care workers into a joint organization, signing up almost 40% in a mere matter of months and proving the interest and enthusiasm of workers for the organization, for representation, and for collective bargaining was boundless.  Thousands have subsequently rallied and held politicians feet to the fire and forced them to committing to implement our aspirations.  Our allies in the Working Families Party, where ACORN has long been a key partner and supporter, became committed to this course as well.

This spring the whole focus of the work shifted to Albany where the New York legislature was in session.  A critical bill establishing a procedure for representation, election or recognition, and finally bargaining was passed by the legislature.  We and the workers were “over the moon” excited.

But, Governor Pataki finally in his lame duck swan session, vetoed the measure!  I have to admit that I had virtually given up hope on an overturn.  The odds seemed too long and good news too uncertain in these difficult political seasons.  My hopes were pinned more on a change in administrations that would allow a new governor to do the right thing and weather through whatever carping followed later.

No word on the last day of the session in the papers convinced me that our effort must have faltered, until I got a call from Jon Kest, New York ACORN’s Head Organizer, and the field general of this drive, last Saturday that — lo and behold — we had in fact prevailed not at the 11th hour, but virtually at several minutes past the 12th hour.  A deal had been sealed to overturn the Governor’s veto with star roles played by our own Bertha Lewis, NY ACORN’s Executive Director and Co-Chair of the New York Working Family Party, and our long time companero, CWA’s Bob Master, who was also a Working Family Co-Chair.  Bertha had managed to move the pieces to assure some likely slating for legislative races, and Bob had stepped aside on a measure he needed in order to allow the work and rights of 52,000 to carry the day in the final minutes to construct the semblance of deal.

There is still mop-up that has to happen in coming months, since the legislature, though in caucus agreement to overturn, has to actually raise hands and be counted over the coming months to finalize the override.  Nothing should be achieved without worry and sweat after all.  And, there is now an outcry by columnists for the NYPost  and elsewhere that whine and moan that these 52,000 are undeserving somehow and should continue to work — nay, slave — in obscurity in the netherworld of casual employees with no clear status as private or public employees but still paid by state contract.  The critics want to see this as a bargaining bill, when it really is nothing more than finally an accountability bill — a reckoning of workers with reality.

There will be a lot more to this story, but this chapter has a deliriously happy ending.  Now, we have to re-sign the workers and move the pieces another step forward until final victory.

Ps.  Take a look at NY Times article on the story as well.

Albany Ready to Give Union Rights to 52,000 Day Care Workers

ALBANY, June 27 — The State Legislature is poised to override Gov. George E. Pataki’s veto and give 52,000 home child care providers, now independent contractors, the right to organize and collectively bargain with the state for pay and benefits.

The move could have a major impact on state finances in the long term, in effect creating a vast new class of workers with some of the status of state government employees. Child care providers whose wages are subsidized by New York would have the standing to negotiate with the state for wage increases, as well as benefits like health care, workers’ compensation, paid vacation or sick days.

While further legislative action would be required for such workers to be included in the state pension system, unions have been highly effective in lobbying lawmakers for pension benefits for public employees. Taking on benefit costs for 52,000 people would add a significant burden to an already strained health care and pension system that provides benefits for some 300,000 employees of the state and its public authorities, in addition to retirees.

Unions nationwide have fought hard for this kind of legislation. The bill’s supporters, who also include antipoverty groups, say that if education is a priority, then people who provide day care must be paid more than the $15,000 to $19,000 per year they typically earn. They also argue that child care providers need a forum for disputes over pay or their compliance with state rules.

The workers included in the bill provide day care in their homes to children of welfare recipients or low-income parents, where the children’s care is subsidized by state and federal funds. A provider could qualify by looking after just one child with government support, even if the provider tends to other children whose care is paid for by their parents.

The government “is not paying enough for the children who receive subsidies,” said Bridget Carruth, a provider in the Bronx who has been a vocal union supporter. “Not only are they not paying enough, there are no paid vacation days, no paid sick days, there isn’t enough money to buy educational materials and toys and games for children.”

Backers say the New York legislation will cost nothing, at least up front, because any new benefits would still have to be negotiated with the state. But in Illinois, the first of a handful of states to let day care workers organize, an initial contract for 49,000 workers, signed earlier this year, will cost the state about $80 million a year from a combination of health benefits and wage increases.

“It’s possible to frame many of these things as cost-free in the short term,” said Edmund J. McMahon, a budget analyst at the conservative Manhattan Institute. “The long-term cost impact will be significant.”

“The most significant costs for government, especially governments that aren’t growing, is pensions and other post-employment benefits,” he said, adding that the state’s liability for retiree health care “could be between $75 and $100 billion.”

The governor, in his veto message earlier this month, also expressed concern that several hundred million dollars of federal grant money could be jeopardized; union officials said that has not been the case in Illinois.

At a minimum, the action by the Legislature is another act of defiance of the Republican governor in his waning days in office, and reflects what fiscal conservatives see as a state with little budgetary discipline. It was the Republican-controlled Senate that overrode the governor’s veto on Friday, in a 57-to-4 vote in the last minutes of their regular legislative session for the year. One vote against the override came from Senator David A. Paterson, a Democrat who is running for lieutenant governor alongside Eliot Spitzer, a leading gubernatorial candidate who has expressed reservations about making the workers quasi-state employees.

Legislators and union leaders say that the overwhelmingly Democratic Assembly, which passed the bill in April and has close ties to organized labor, is likely to return to Albany at some point this year to join in overriding the veto.

The Senate votes show the clout of the labor-backed Working Families Party, a past supporter of Senator Nicholas A. Spano, a Yonkers Republican who carried his district by a mere 18 votes in 2004. Mr. Spano, who sponsored the child care bill, is aggressively courting the party’s support in the fall election.

“These are for the most part minority women who are the lowest-paid wage earners,” said Mr. Spano. “These are the people who are allowing many of our women to get off of welfare and get a job. It is completely unfair to ask these same people to treat our children with dignity when they are not treated with the same level of respect.”

Shortly after the vote Friday night, Mr. Spano called Bertha Lewis, the co-chairwoman of the Working Families Party, to tell her the news.

Ms. Lewis is also executive director of the New York branch of the Association of Community Organizations for Reform Now, an antipoverty group known as Acorn, which is a major developer of the child-care organizing effort nationwide.

“There was a bunch of folks in the Senate that did the right thing,” Ms. Lewis said, adding, “these are women who are low-wage workers who have been under this yoke for years.” 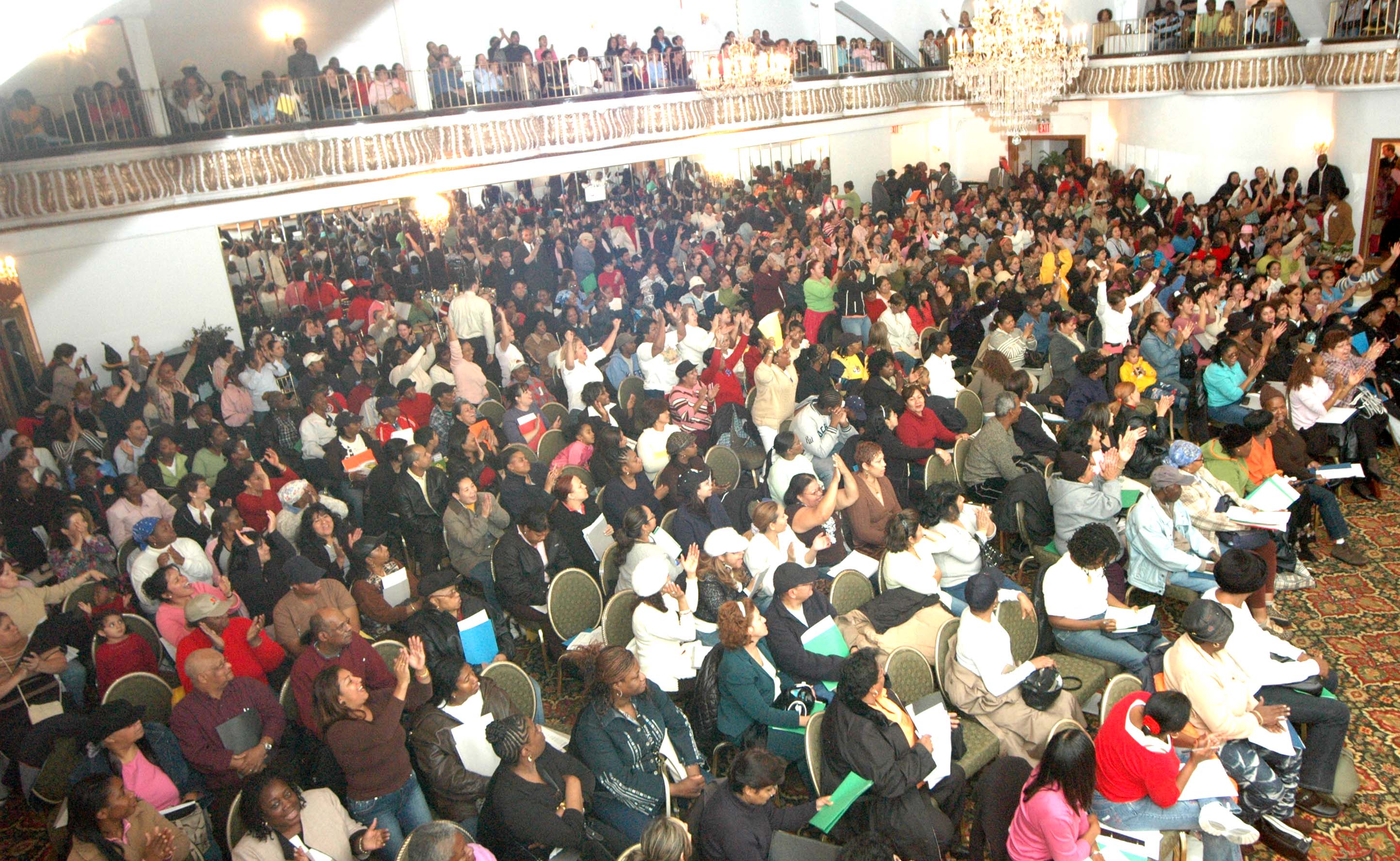