July 10, 2006 – Columbus – Woke at 430 AM in dark. I listened in this 40+ year old dorm to showers running and doors slamming as other organizers moved to prepare luggage for loading in vast depots for bus pickups all over the Ohio State campus. None of this is easy, but it is time tested, and works surprisingly well. Before 6 we picked up a van key and shuttled luggage over to the Louisiana bus. Throughout the campus there were knots of red shirts straggling here and swarming there as they moved towards breakfast or loaded buses and vans. At 6 the lines were moving well for breakfast in different locations.

The Columbus Dispatch had a solid story on A3 with a nice picture of former Senator John Edwards waving to the crowd while ACORN VP Maria Polanco looked to stage right with her back to the camera and Edwards was hugged by one of the Board members.

The banquet had been a better event this time around. Rev. Al Sharpton was a stemwinder, and Roseanne Barr was a pepperpot. President Clinton was excellent on video.

Monday’s big hits were Eliseo Medina, one of the executive vice-presidents of SEIU, Senator Hillary Clinton (D-NY), and the Mayor of Columbus along with Senator Ted Kennedy on video pledging to continue the fight with us on raising the minimum wage . Eliseo and Hillary were on message all of the way.

Eliseo called for working people everywhere “…to join unions on the job and ACORN in the community.” He spoke eloquently and forcefully about the partnerships that ACORN and SEIU had created over the last several years.

Senator Clinton minced no words both in praise of ACORN and our work together but also in zinging her fellow members of Congress for pocketing $30,000 in raises in 9 years while there had been no increase in minimum wages federally during the same period. She also got an excellent response on health care.

I was fascinated by a new problem that was one of those “let’s make a note” moments. Speakers at past ACORN conventions were often effective and frequently popular, and we did have our “meathead” moment with Rob Reiner in Los Angeles in 04 which surprised us as jaded organizers.

Columbus saw the ACORN convention cross into a celebrity zone.

Edwards on Sunday had walked off the stage and into the crowd and been mobbed by people for pictures and hand shakes for 5-10 minutes after his speech. Camera cell phones were pointed at him from every direction.

Still I was unprepared when Rev. Sharpton came into the banquet on Sunday night with the mob scene of members who wanted to have their pictures taken with him. As quickly as I tried to react, he was already engulfed in a scrum of people and virtually pinned with ACORN New York executive director, Bertha Lewis, against the tables. With help we were able to move Sharpton to more open space which was safer. He was affable about the pictures, the hand shakes, and the crowd. This was his element.

Roseanne told what seemed to be a joke about being “scared” about social change, but maybe spoke to being a more private person despite her celebrity. She wanted privacy in the room while she ate at her table.

I was prepared on Monday for Hillary. We had a row of people in front of the stage with big John Jackson, veteran Los Angeles leader, anchoring the line this time. The Secret Service men that are part of our constant package were smooth as silk and calm additions to the crowd. Various New York organizers helped screen the crowd from rushing the stage as well.

Pictures snapped everywhere in a super bowl scene, where the blimp focuses on the flashbulbs going off in the dark. Members were everywhere capturing a bit of special history for themselves.

Even in the great roar of voices in an ACORN convention, I was taken by what this splash of celebrity does for the organization and brings to our culture and cause. Something I will think about for sure. 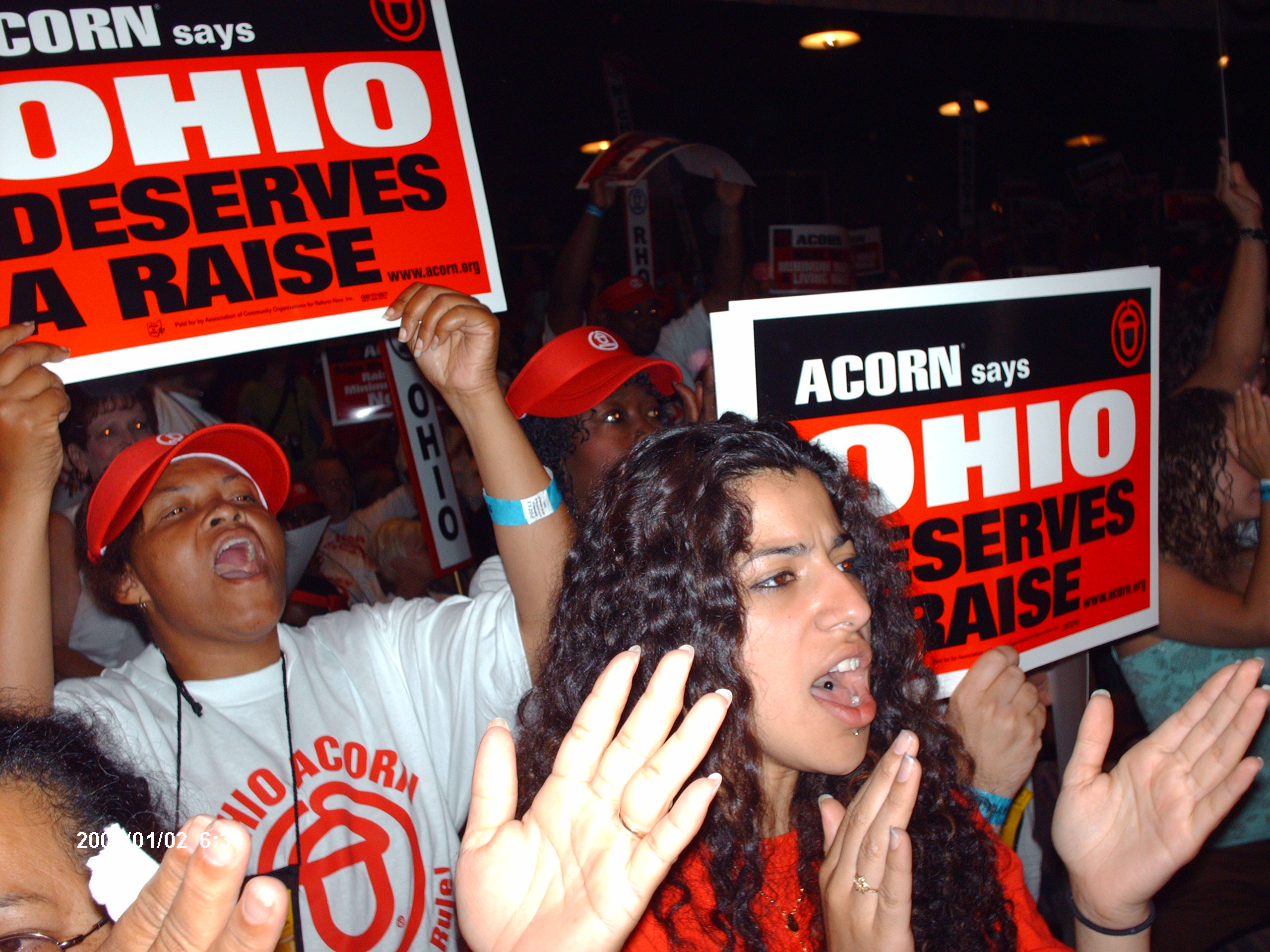