Columbus      It is a weird (and I suppose discouraging) fact of contemporary public life in the mega-media and mile-a-minute internet market that there has become an inverse ratio of attack that comes with accomplishment.  The bigger ACORN becomes, the more it becomes a target for the haters, the baiters, pretenders and posers, and the apologists and promoters of all manner of weirdness.

In the same way we saw the exhilaration of celebrity as a new factor in the ACORN organizing environment at the ACORN national convention, we also saw in our current notoriety and increasing prominence and power that ACORN — and all of us closely identified with the organization — have become tactical targets.  Not only in future conventions will I have to be more mindful of security assignments for speakers, the stage, and our top leadership, but I will also have to start making plans for the crazies that walk among us for whom we represent an opportunity for their agendas, rather than our own.

I don’t mean the LaRouchers who managed to sneak in a banner attacking ACORN and Hillary Clinton — I think it said we were Nazi’s but couldn’t tell — on the balcony on the last morning of the convention and then tried again outside as we loaded the buses.  We were able to chase this poor soul off within seconds.  He did not prompt warm fuzzy feelings from our members, and the heartbeat of liberalism is not in our soult when we are loading 2500 members on buses for a march — believe me about that!

I do mean the rightwing tacticians, who are both shrewd and clever.

The ACORN Convention became an opportunity for them, especially for one of the right’s copycat operations, whose main purpose — from our experience — is to depress wage rates and oppose any increase of the minimum wage.  We can generally count on seeing this outfit everywhere that we are involved in an initiative of any kind that will benefit tens of thousands if not millions of lower paid workers who greatly deserve a living wage for their hard work.  First, we picked up the usual trifling email bulletin from one of our news services that this outfit was going to release an “expose” about ACORN and the minimum wage campaigns to coincide with the ACORN national convention.  Tactically they obviously assumed — correctly as it turned out — that we were in Ohio with the convention, lots of members, and a lineup of support for raising the minimum wage, so maybe they could try to get “in the story” with some stuff.

I actually found it hard to find the report, which comforted me.  In their bulletin they called for a protest by people sending complaints to me directly at my email address.  Thus far I haven’t received a single email, so I’m breathing easy.

The coup de grace though was a “billboard truck” attacking ACORN.  Senator C. J. Prentiss first mentioned something about this truck when she spoke on Sunday.  I didn’t know what she was talking about?  On Monday during the march the truck though kept driving by the march line and managed to stay parked for a couple of minutes across the street from the Ohio State Capital where we had our final rally to support an increase in the minimum wage.

It must have cost thousands of dollars!  It was big.  It was professional.

And, it was irrelevant.  Some members took pictures.  It was a novelty of sorts.  Nothing showed up in any picture of the events or any story of the convention.  It was a tree falling in the forest with little sound.

Except that the true believers — the haters and the baiters — in a constant and closed loop of bile will read this, sadly, as if it were truth, and repeat it to themselves, and quote it back and forth, no matter how wrong and distorted, and it will have a life in a parallel universe alongside of the struggle and fight of the organization.  We seemed to have finally arrived.  And, when you do finally get there, what you find is another dimension of a world of weirdness.  In these days and times, this social change thing is a weird and wild ride! 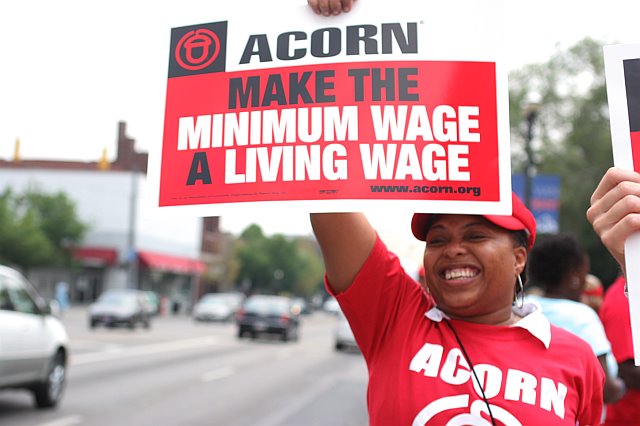