Washington             Through the magic of Google Talk which allows me to keep up with our international operation with the luxury of free internet calls, I spent a chunk of time with Reena Desai, our campaign director in India around blocking the expansion of foreign direct investment in retail for Wal-Mart and its pals (www.indiafdiwatch.org).  I needed to talk to her about the campaign, but more importantly the news of the day seemed to intersecting our work since I was reading the terrible stories about the bombing of the Mumbai trains during peak rush hour on Monday. [see earlier blog]

Tactically this is no great stretch for terrorists of any stripe.  6-7 million people are estimated to use the Mumbai trains which are among the most crowded and busiest in the world.  I found my experience on the train exhilarating, but unquestionably it would be a daily grind.

Reena was safe, but in the coincidences of work had been at the Bandar Station where she was to meet one of our organizing committee members in Mumbai, Mr. Maheshbhai, the very same gentleman who had escorted me on my train adventure.  Both of them were to rendezvous’ at the station at 6:30 PM and then were going over not far from there to visit with our attorney and friend, Vinod Shetty.

Reena was on the platform and told me that she heard a blast of some kind.  She thought maybe a house had exploded.  She knew it was close and in the direction of the train that had just pulled off, but did not immediately realize it was the train.  She had the presence of mind to abandon the station and the appointment.

Mr. Maheshbhai was on a trailing train, and had narrowly avoided being on the train where one of the almost simultaneous explosions had occurred.

This was all a close call!

The lesson Reena drew was to begin avoiding the 1st class cars on the trains.  All of the bombs where targeting the business class cars.  These were bombs aimed at the feet of the upper classes and white collar commuters.

The cars are segregated by gender in Mumbai, because of the wild press of flesh and crowds on the trains which do not lend themselves to any modesty or restraint.  You are groped as a natural fact of life in the crush of the crowd.  There is no choice but to use the trains or you are stranded and the costs of taxis and the terrible traffic would sentence you to a daily misery.  So, Reena says so long to 1st class and hello to 2nd class on the chance that this is safer.

This is now our world! 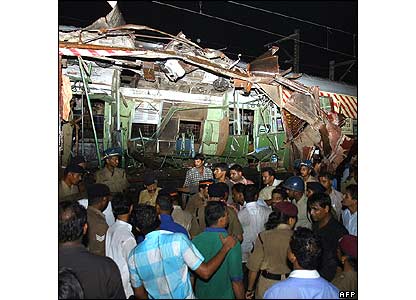 Multiple bombs on a commuter train in Mumbai killed over 400