New Orleans       I give the New York Times begrudging credit for their coverage of New Orleans both during and after Katrina.  They have been committed to the story and stayed on it with a couple of reporters to this day.  Some of their coverage drives me crazy and the too frequent, top-down, “get ‘r done!” clamor of the editorial page is frequently off the mark and simply “blaming.”

One thing that has been interesting throughout in the “Katrina Times” has been the fame they have given my home neighborhood, Bywater.  Hard core readers of these notes may remember the three references to Bywater, a “working class neighborhood” that became a barometer of the early recovery, making the front page of the Times in three instances post-Katrina and with pictures, too!   I admit it.  It’s fun — and in the early days something of a lifeline — to see pictures and read quotes of places I knew like the back of  my hand, especially when I had not been able to come home yet.  I will also admit that one of the reasons that my neighborhood can easily jump into the news is that it is both in the now famous 9th Ward, and it is low hanging fruit only 30 to 45 blocks from Canal Street dividing the Central Business District and the French Quarter — 2-3 miles in other words.  It’s not the French Quarter or Faubourg Marigny, the next neighborhood moving down the river, so reporters can say it is more about the “real” people.

Sure enough in a front page story on Saturday about the unreliability of electric power service and the way it is crippling the recovery, the pictures and quotes from the people in the street were all around the neighborhood.  The front page picture had people eating in the dark at “13,” a small bar-cafe combo on Frenchmen Street in the Marigny about 4 blocks from the office.  This hole-in-the wall was located next door to the first HOTROC office, when we were doing the hotel and hospitality organizing.  The place had a life before the storm as “New Dog, Old Tricks” — and was an all vegetarian restaurant, a rarity in the city.

Flipping with the story there was a picture of some work on the wires at a colorfully painted balcony that is only about 5 blocks from our place going up river.  These people have an interesting “hand” that is the doorknocker downstairs.  They are across the street from where the cleaners burned down after Katrina, which is now a construction site — surprisingly — where a guy is rebuilding the 2nd floor.  This is the same block as Bud Rip’s, the local neighborhood watering hole, and one of the current co-owners gets a quote in the story.  I haven’t been in there since the place became a Republican club house, although I did enjoy seeing the place used frequently as the setting for the John Travolta movie about New Orleans that had a limited shelf-life a couple of years back.  The same house with the multi-colored balcony was popular in that flick too!

Also on the flip page, staring out at me was James Spence a neighbor I know passingly well who lives two blocks away from us on our street.  James is sitting on the steps of his stoop, as he often does, and the Times team had caught him there on their sear for the “man on the street” point of view, and he handled himself admirably.  When asked about all of this and the problem of no electric power, James seems to have simply told them he would sit outside in order to catch the breeze coming from the river, and reminded them how much worse the “people of St. Bernard” — the parish downriver from ours — had it.

I know James from running with the dog over all of these years that overlap the 10 or so that he has lived in the Bywater.  In the beginning there was only his old blue pickup truck now long gone.  I would see him on the dawn patrol.  He would be picking up his paper, which he had arranged for the delivery team to toss into the bed of his truck, and he would unfailingly say hello to me — by name — and would do the same to Blanco and now Cheyenne as we passed his house.  For a many years we would find him far up or down the street with his dog, a beautiful husky, until she passed away a year or two ago.  He would comment on this or that.  He would formally introduce me to his girlfriend more recently or tell me of going to Germany to chase after a woman he had met in a bar.  I would see his truck parked sometimes two blocks a way at Bud Rip’s, this part of the Bywater’s signature bar.  Sometimes he would have a magnetic sign on the truck indicating he was working for this company or that one.

And, there he was, big as life with his picture staring into the camera in the New York Times! 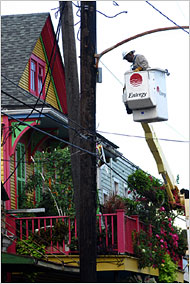