Vallejo      We drove up from San Francisco to the Teamsters Hall in Vallejo.  It felt like “union row” as we passed the Musicians Hall, walked into the Teamsters, and looked at the UFCW Hall across the street.  This city may be a “bedroom” community now, but we were walking in the heart of what used to be the working class in this town.  I was wearing a collection of hats form ACORN, WARN, and the Tides Center for a board meeting of the California Healthy Communities chaired by Mark Wolfe, an expert land use and labor lawyer, and ably supported by Phil Tucker, a jack of all trades labor activist with deep ties to the UFCW.

What was outstanding was to listen to the reports of ten different site fights that were at various levels of engagement with Wal-Mart ranging from the WARN efforts in Merced to various fights in Richmond, Vallejo, Livermore, and towns in between.  The coalition included not only ACORN, the IBT, and the UFCW, but also the Grey Panthers, the Green Party, and local organizations that had sprung up to hold the giant accountable.  The discussion was specific and to the point as the committee plotted their strategy through the Environmental Review (EIR) process at the local level, and the zoning boards, and the city councils and all of the push and politics and intrigue in between.

The simple conclusion was inescapable.  If we are going to go “toe to toe” with this company, then we need grassroots alliances like this in all of the areas where the company is expanding.

Doesn’t take much to understand why we are having the 2nd Sitefighting Conference (www.sitefighters.org) in Sacramento the last day of August and the first day of September in just a few weeks from now.  The work done in Florida by WARN (warnwalmart.org) and the efforts like this one springing up all over California need to just get bigger and multiply. 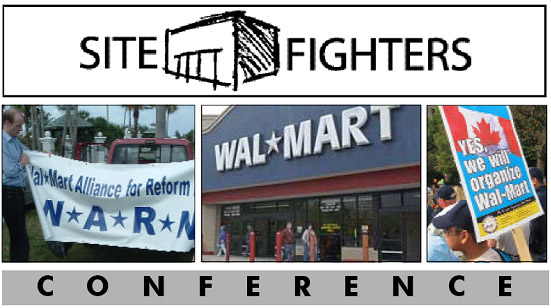 Site fighters from across the country will be convening at the 2006 Sitefighters conference in Sacramento, CA at the very end of August.