San Francisco     On the “risky city” index I live in #2 (New Orleans) and have just flown this week was in #35 (San Antonio), woke up this morning in #4 (San Francisco), and will be driving to #5 (Oakland) tonight and spending all morning there tomorrow.   Makes you think, doesn’t it?

A list of the natural disaster risks were compiled and released the other day by something called SustainLane.com which measured exposure to hurricanes, tornadoes, earthquakes, major flooding, catastrophic hail, and what they called “super-outbreaks,” which I hesitate to think might include.  In a weird way I take comfort from this list, partially because of all of the holier than thou’s who turn their noses up at where I live, can now be met with a, “hey, what about you, #12,” or some such clever riposte.

These folks put out this list for a good reason as opposed to my little petty one.  They used primary research and data from an outfit called Risk Management Solutions to determine the rankings.  The whole purpose was to give communities a “heads-up” to problems on the horizon for planning and disaster preparedness purposes.  At ACORN in the wake of Katrina we have been having the same conversation, thinking that perhaps we should be ahead of the curve rather than running to catch up.   This list isn’t a real “sustainability” list though.  It doesn’t factor whether or not these cities will shrivel without water over the next 30 years or, lord forbid, might be targeted for trouble by terrorists or others.  Eventually the lesson is that one has to make one’s community as safe as possible.  There are very few places to hide, although the Midwest seems pretty safe out in the cornfields, if you can find work and want to live there.

Here’s the list, so you can judge your hometown for yourself: 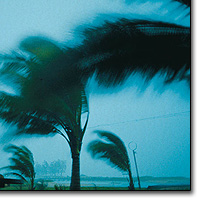 Where does your city lie in the “risky city” index?