Buenos Aires     We tried all the forms of mass transit to settle on our favorite, and maybe the best, system for getting from the Belgrano neighborhood where we are living to the ACORN office on Medrano, where we work in El Centro just a few blocks from the Casa Rosado, the national capitol of Argentina.  We now try to make sure we catch the 130 bus between 7:45 and 8:15 AM at the very latest, not just so we can be at the office by 9:00 AM, but so that we have at least a 50-50 chance at a seat somewhere along the route.  The bus is a great deal at about thirty cents ($0.30) in US dollars.  The real attraction though on this roughly 45 minute journey is that for most of it we are looking out the window at all of the parks, monuments, and museums that run along Avenida de Liberatador.  One looks at 12 lanes of traffic sometime crammed with cars and cabs from the bus perch.  Above I can sometimes see bumper to bumper traffic coming into the city.

In the distance past the parks lie the train tracks and past them the Rio de la Plata and the activity of a working port.  We did not care for the train, though it was only a few centavos more expensive.  It was a longer walk to catch it, an equally squashed ride for a few stops with no redeeming sites, and then almost a 3000 kilometer (about 2 miles) to the office.  Once was enough for this jornada de morte!

At night around 8 PM, I like taking the subte, the Argentina subway (subte is short for subtreanno), which costs maybe 50 cents USD.  Linea A is almost quaint and is the oldest subway in Latin America.  Linea D, which I can pick up about 4 blocks from the office at Catedral, at the start of the line, and take to the next to last stop at Juramento, works for me.  The subte is a squash as well, but picking the right train and car, I can plant myself next to the door away from the siding, and hold on tight without being mauled along the way.  It is much faster, though the walking makes it a “push.”  Once I alight from the train, it’s a nice walk on a winter night through past the panaderias, cafes, mercados, and shops, all brightly lit in the neighborhood.  Then I walk diagonally through a hillside park and down at Pampas and across the train tracks and finally to the apartamento only a few more blocks away.

It all works and is affordable, and reasonably quick and efficient.

I think about this reading the headlines and emails about the latest crises in plane travel in world.  One recoils at the notion of once again standing in endless lines at airports for hours.  I can not even imagine the horror of travel for an hour, or four, or eight, or twelve, if stripped of books, magazines, music players, and computers — who cares about shampoo and water!  Standing and then sitting on the bus this morning, I wondered what could be next in reducing the quality of life and difficult of work, if travel is a necessary and fundamental part of your job, as it is for me.

The tactics of true believers, committed to alienating, rather than building, a mass base, are frankly alien to me.  I can accept it all as just the price of life and work, but thinking about it, as one accepts the necessity of security, the surrender of the small graces of life can only be done with maximum protest. 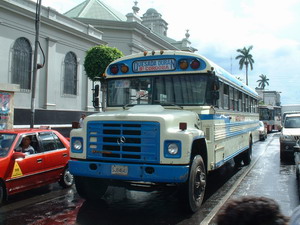 Riding through the traffic of Buenos Aries