Santiago         Ana Sugranyes, the energetic director of Habitat International — Coalition, headquartered in Santiago, had somehow managed to get us meetings with community leaders in both La Victoria and Sierra Navia at different times during the weekend and guided us through the sprawling city to these meetings.

Both communities were outgrowths after 30 and 50 years squatters’ movements in their time that had taken the land and begun to settle.  The constant reference point was back to la toma, the Chilean expression for the time of the “taking,” the squatting that began the long process of building the barrio.

The leaders of La Victoria were quite impressive, especially their sparkplug Claudina Nunez Jimenez, who had recently run a vigorous though losing campaign to be elected as a Senator from the general area.  We met with almost a dozen of the leaders, most of whom were second generation activists, who could still speak extensively of the decisions and experiences of their parents back to la toma and decisions that they had made to assure the independence of the community from government control.

Santiago is cobbled together megapolis of more than 5 million but without a real city government as one would normally expect, but more a collection of 35 comunas — communities — which combine under the state to be Santiago.  The municipality that carries the weight of governing is therefore a smaller entity with fewer resources, but in some cases similar ambitions.  A common theme was not being taken over by the city, but part of this had to do with transferring the “ownership” acquired in la toma for the offers of a mortgage and loss of autonomy to the municipality.

Now the houses fit together along the narrow streets.  Most are between 350 and 500 square feet.  As we shared stories of their work and compared it to the work of ACORN in other areas, many of the stories were spurts forward and then being stuck for years, and then springing forward, and so forth.  The dictatorship has been their largest obstacle, but the last more than 15 years of democracy have not seen an end to their problems either.

Over the years some have grown taller and most have grown sturdier.  We were meeting in a small house which La Victoria had made into a cultural center for the neighborhood.  After our conversations for hours they walked us over to the neighborhood’s television station, Canal 3, a successful volunteer operation.  We saw the alcohol and drug rehab center build solely by community donations and support.  Finally, we came to the priest’s house and were walked upstairs and show where one of their martyrs, a local priest named Andres Jarlan, was slain by a stray police bullet being fired a march during the time of la toma.  This was a shrine which showed where he was sitting working at his desk and found slumped over.  There was an arrow that pointed to the bullet hole.

Sierra Navia was a young community and in some ways more spread out.  We met in Casa de la Identitad y Desrollo, the House of Identity and Development, a young two year old operation led by a market trader who was a wizened veteran of many years in the neighborhood and party struggles, and a politically active and hairdresser in the fashionable Provencia neighborhood east of town, who spent his time and money on these kinds of projects.  They had put together 200 people to build an array of fledgling social service programs at the house, once again an all volunteer and donations operation, which they were hoping would become the focal point for political and social change and development in Sierra Navia.

In the rain and cold we walked through the barrio as night fell on Sunday.  We were welcomed into one small 300 square foot home where there was a small kitchen and open area, a bedroom, a bathroom and not much else.  Ironically, this house was the warmest, coziest place we had been for several cold Santiago winter days, as the couple’s small heater handled the cold and the concrete floor with ease.  We walked away with thanks.

Representatives from both of these areas have been attending a community leader’s weekend school being run by Susana Aravena from Sur, a large Santiago research and training NGO.  They and 80 others have been meeting on Saturdays for several months and it turned out they are planning a first meeting in November to see if they can all come together.  Not surprisingly they had a lot of questions about how ACORN brought various communities tighter.  Claudina thought the time was right.  Carlos from Sierra Navia thought the meeting was premature.

We were grateful for the experience with both communities and wished them well with what whatever small help we could provide.

After hours of conversation in La Victoria, I finally said that it seemed the summary was of their history was that “if you struggle constantly for 50 years perhaps you can build a strong community.”  They laughed and totally agreed.

This seems to be a universal lesson. 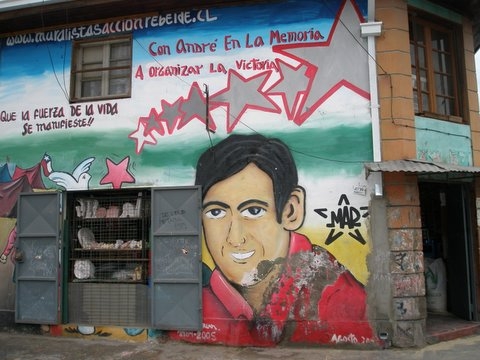 A mural to Father Andres Jarlan, a Martyr of La Victoria
Carlos and the leaders of the Casa de la Identitad y Desrollo
Claudina in turquoise with the Sister and other La Victoria leaders 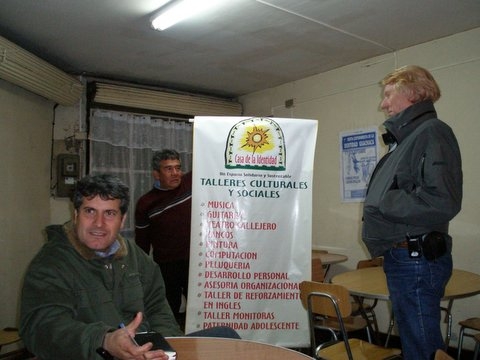 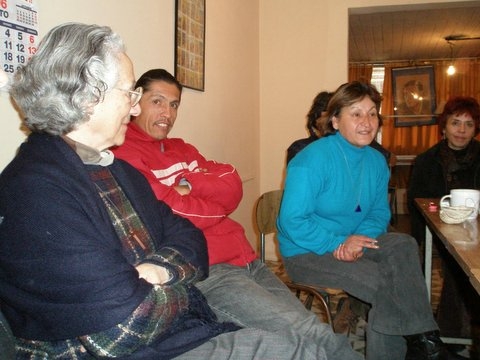