Santiago       Ana Sugranyas, our friend from Habitat International Coalition, which we had gotten to know at the World Urban Forum this summer in Vancouver, was gracious enough to invite us to dinner at the apartment she and her husband shared in the Provencia neighborhood east of Santiago’s center.  Her husband is Alberto Rodriguez, director of SUR, an important Chilean non-governmental organization specializing in research and training.  Ecuadorian shrimp turn out be fantastic, but the real treat was the good company and spirit of categorical commitment to the work at hand.

We started the evening sitting in front of a portable computer and looking at a power point presentation assembled by Ana and Alfredo which looked at the development of sprawl in Santiago and the corresponding lack of development of social housing (read public housing in the Untied States here!).  How special and wonderful was that?  There we were, pouring Alfredo a glass of his favorite Chilean wine, while he and Ana narrated the power point and answered one question after another, while we sat on the floor of their apartment.  There really can not be a more wonderful gift than this work and the people who have found a home within it!

Their evidence was compelling and produced by meticulous research and showed that over a almost 25 year period from 1980 until 2004, 90% of the building permits for new construction in Santiago were issued at the far reaches of the outer circle of Santiago’s metropolitan limits, while only 10% of the permits for such construction were in the city’s core in the central area.  Part of this phenomenon was driven by lower land costs on the outskirts of the city and the effective subsidization of private developers of social housing, which drove development to the outskirts creating vast sprawling tracks.

The power point showed picture after picture of these the cookie cutter developments that were monotonously the same for acre after acre in high density on small 300-400 square foot floor plans.  They estimated the value of each to be about $10000 USD.  The financing scheme was heavily subsidized with some “mortgages” handled by the state and a requirement of about 10% down payment.

Most sobering was a final slide that showed the patterns in Santiago of domestic violence, and when overlaid against their map of concentrated development of social housing and sprawl was tragically the same.  Ana and Alfredo also warned that this was still a developmental program where there was no change over the period, and despite the emerging evidence and clear problems, seems to continue to be the master plan for lower income families and the accelerating sprawl of Santiago.

Important tools are being produced here by good people, and as disturbing as the presentation, the spirit of our friends and this dinner, gave us hope for their work, and our own. 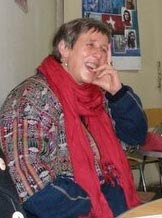