New Orleans     The President of the Canadian Auto Workers (CAW) is one of the most quotable and recognizable figures in public life in Canada.  Besides running the largest private sector union with more than 250,000 members, Buzz Hargrove is one of those rare forces of nature that come into organizations from time to time and in some way make them better, different, and more in the middle of the mess than many others might have imagined.

I had picked up a book by Buzz some years ago on a remainder shelf on one of my soirees in Canada and read it with great interest, not knowing if it was one of many he had written or a first effort.  Driving in my truck after spending 5 hours touring the storm devastated and hopeful efforts of our New Orleans citizens, he assured me that was his only book until he retired and told the rest of the story.

We are in the second week of great partnership to rebuild New Orleans forged between ACORN and the Canadian Auto Workers, particularly their skilled trades division directed by Colin Heslop.  This whole ball had begun rolling over recent months with an earlier inquiry about our Katrina work by Carol Phillips, our old friend who ran the International affairs and education departments for CAW at one point, and now was Executive Assistant to the President.   Carol had walked through a very generous contribution to ACORN’s Rebuilding and Recovery Fund at the time of $20,000, and kept in touch.  She had linked Colin and me together, and now we were involved in a full blown effort that was helping rebuild houses.  It was a coup when Colin called to say that President Hargrove was going to come down on the Katrina anniversary for the day to help out and tour the work and assess its future.  This was an opportunity!

We had a wild day from the minute Colin and I picked up Buzz and Carol (who suddenly was able to come!) at the airport to mid-afternoon when we plopped them back at the curb.  I pulled the suburban off of the interstate and gave them a quick tour from the 17th Street Canal break through Lakeview and south through Gentilly so that I could sneak through Galvez and go into the 9th ward from the back way.  Scott Hagy, our construction manager, had already called and said that Secret Service was blocking the entry to Alvar Street where we were going to visit the home construction.  President Bush was in town for 24 hours of photo ops and sound bites and was ubiquitous.  Galvez offered no obstacles though and the CAW members and Jackie Baggage showcased their work for Buzz and Carol.  They had to talk fast because Buzz’s cell phone was ringing constantly with media calls from Canada.  A story had broken in the business page of the Globe and Mail in Toronto about a proposal CAW had made to Ford and others to build a new plant for small car production.  In the midst of auto layoffs everywhere, a new plant would be big news, even if everything was still at this early talking stage.

As we crisscrossed the 9th ward, after seeing the houses ACORN is doing with the Preservation Center and Historic Trust, we had to wait for President Bush and his motorcade to go by on St. Claude where they had been visiting Fats Domino’s place, and then we fell in behind them as we drove back to the office for a minute.  Miss Jackie and Buzz did a live feed for the Canadian Broadcasting system on the program across from the new memorial in the lower 9th ward after I had wrangled Miss Jackie from the Secret Service lockdown across from her house since Bush was showing up there to walk through the Habitat Musicians’ Village across from where we were working.

But, despite the Bush nuisance, our Canadian visit was another sign that real people and real organizations can make a difference.  There is more than rhetoric and sound bites in partnerships and the more CAW and ACORN talked, the more it seemed we could do and wanted to do together.  I could over hear Buzz in the front seat trying to call and see if he could get some pickups donated by the companies to help us move people and tools.  Buzz would ask if we could use some people longer.  Carol asked me before leaving what I thought about CAW working more closely with ACORN Canada and supporting our work there, because Buzz was impressed and wanted to see what might be possible at home.  Absolutely!

Mark the memorial and do everything to rebuild in New Orleans and prevent this everywhere.   Another day well done! 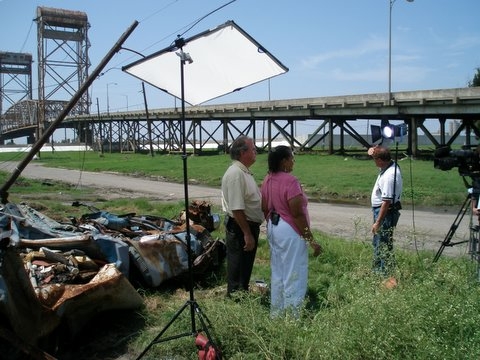 Buzz Hargrove, president of the CAW, and Jackie Buggage, whose house ACORN and CAW have been finishing, are being interviewed by Canadian television in front of the Industrial Canal bridge.