New Orleans      Thinking about Labor Day this year was easier.  I was not in Rochester, New York with Chaco running from Katrina and stuck on the road, so it had to be better.  With the split in labor the annual Labor Day picnic which Benny Hernandez from the Sheet Metal Workers and I reinstituted some 10 years ago in New Orleans while officers in the GNO AFL-CIO, had become an on again off again affair.  Off last year in the wake of the storm, and with the division of labor now and the demise of some of our largest unions, like the teachers, I am not sure it is happening this year, but even if it is, it will be a small and weak affair, not the 1000-1500 strong event of several years ago.

Labor Day picnics and parades seem more about celebrating survival these days than solidarity, especially since that has become such a rare commodity.

There is less and less to celebrate even without the split in labor movement.

The minimum wage is now at its lowest buying power in over 50 years as one painful example of the care and feeding of the working men and women.

Louis Uchitelle pointed out a particularly depressing point in the Sunday New York Times, when he mentioned that no one is really counting the statistics (just the scars perhaps?) on the numbers involved in concessions being given up by workers and often their unions, as they try to hang on.  He mentioned that the Bureau of Labor Statistics used not to count layoffs either, but in the devastation of the late 70’s and early 80’s began doing so, which is why we know that 30,000,000 workers have experienced layoffs in the last 20 years.  No one though is counting people who were not laid off, but had to lay down to hold on with giveaways that can hit 20% of pay and all kinds of benefits.  Uchitelle estimates that the number involved in the last decade is 2,000,000 people.  A lot of people in short!  And, that also does not count the numbers that have gone from full-time to part-time status which is also daunting.

Elsewhere the point was made that for the last 3 years inflation had outstripped pay increases.

This Labor Day I guess we need to simply focus on the fact that we are lucky to be working, and realize that given where our fellow workers are, we better start applying ourselves to the task with some muscle! 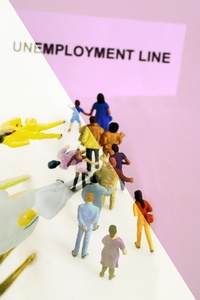