New Orleans      No matter how hard they try, and believe me, they try very, very hard, the forces of evil are still having some difficulty curtailing the ability to register new voters in Ohio.  Friday, I received welcome news that we had won a seminal lawsuit enjoying the notorious and infamous Secretary of State of Ohio from enforcing recently passed draconian rules designed to thwart registration efforts.

The real intention of Ohio House Bill 3 was to chill registration efforts by civic groups by effectively criminalizing the simplest errors on one hand and making the entire process excruciatingly slow and burdensome.   ACORN and Project Vote along with others and the support of a mess of top flight lawyers refused to be intimidated and the decision issued on Friday enjoined any enforcement of the bill as a restraint to voting rights.

In Project Vote v. Blackwell, we successfully argued that the rules will limit voter registration, unnecessarily exclude eligible voters from the election process, and suppress the vote in Ohio.   We contested a procedure required by the Ohio Secretary of State that would have changed the process for returning voter registration forms collected by non-partisan civic groups conducting voter registration drives. In the past, citizens working to register voters were able to turn in the completed forms to a civic group or church that would review the forms for accuracy, turn them into the registrar, and follow up later to make sure the voter was actually registered.   The rule we blocked would have made it a crime to designate one person to hand in the forms collected in a drive; each volunteer or worker would have had to go personally to the election offices to deliver every form collected.   We also successfully argued that rules that require online training excluded low income citizens and civic groups who don’t have computers as well as individuals with disabilities.

Pretty much won hands down and coupling this with an earlier, and similar legal victory in Florida, we could hope that this sounds the death knell to efforts to restrict the vote.  But, hope is not a plan, and we know better, so we will continue to redouble our efforts to register our people, believing as we do — along with damn few others! — that more democracy is a cure to much of the mess around us.
Brennan Center
September 3, 2006 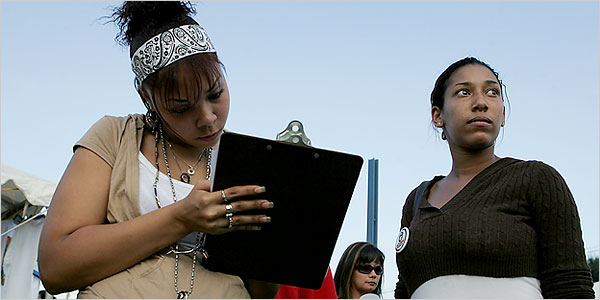