New Orleans      In the painful rebuilding of New Orleans we have discussed the exhilarating and depressing saga of the Alvar Street Library in the Bywater neighborhood of the city several times.  As faithful readers recall, it was re-opened with great fanfare as a project of the American Library Association at their convention this summer.

It was new and beautiful.  It was also a mirage.  There was no staff, so after weeks there was still no way to actually go to the library despite the sign outside saying they were open.  Gradually in recent weeks they have begun to be open for a few hours a week.  Finally, after Labor Day a sign was posted saying they would be open Monday through Thursday from 10 AM to 5PM and then for a couple of hours on Saturday — hosanna!

I keep a watchful eye on this library.  I need it to stay open for another generation.  I imagine myself in my dotage spending a piece of every day there reading newspapers and magazines there when I can no longer afford to get them at home.  I also want the library to have a new chance to really serve the neighborhood.  For 15 years I have resented the fact (ok, this is all personal now, isn’t it?) that the local real estate agent dominated civic association did a small project there in the yard next to the library to “beautify” it, and then promptly locked it so that this small space of public park — the only such space in the neighborhood really — was totally unavailable with its benches and quiet, green.  What was the point?  Have a park of sorts that is then blocks access to the community?  I have seethed about this silently.

The “new” Alvar Street Library got the benches back together and a local nursery off St. Claude donated some plants and flowers, and it looked beautiful.  Furthermore, although there was a lock and chain on the gate to the yard, it was never locked, which meant it was finally open to the community.  So, I desperately wanted to give them another chance.

Problem is that there still are no workers in the city really on the outside of the library, anymore than there were on the inside of the library.  I talked to my son about the fact that we needed to do our part.  He agreed although I did not accurately measure his enthusiasm, we are old boy scouts still at heart, so we would do our part.  We decided (ok, I decided and he agreed, I think) that we would mow their grass and keep the park alive until reinforcements.

I came back from Buenos Aires though and the grass was a foot tall.  We were already losing the battle.  Now, after one lawnmower died, and we have inherited my dad’s lawnmower, we have beaten back part of the grass to reclaim the park somewhat.  Yesterday, I finally was in town coinciding with the library being open and made my plea to leaving the gate unlocked in exchange for our secret labor.  I was probably alone in being delighted to see a beer can on one of the benches indicating that someone had stopped for a minute of rest there.

Libraries are important.  So is public space.

Our little guerilla war on Alvar Street continues to rage and finally counts some small victories. 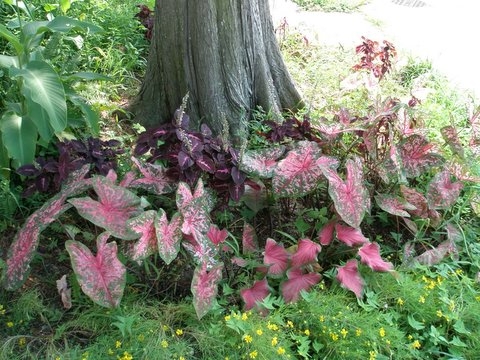 The “new” Alvar Street Library got the benches back together and a local nursery off St. Claude donated some plants and flowers, and it looked beautiful.
I came back from Buenos Aires though and the grass was a foot tall. 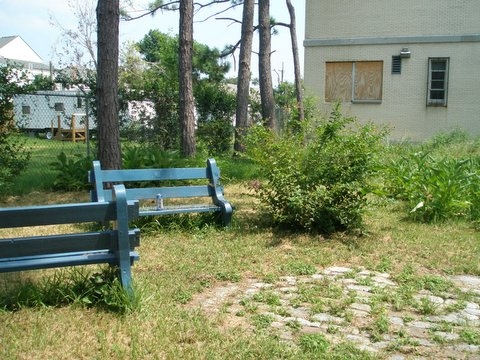