Toronto      I listened carefully to the ACORN Canada board meeting as the leaders from Vancouver, Toronto, and now Ottawa, reported on the progress in their local chapters and cities. For example, a long campaign to deal with payday lenders that has been the signature effort for ACORN in Canada seems to be finally falling in a position to remove some of the federal impediments because of an unlikely campaign commitment from new arch conservative Prime Minister Stephen Harper, though this now means we have to prepare to move on the provincial level with full force.

One thing that caught my ear though was a program being pushed by some of the Toronto ACORN tenant based chapters in Scarborough and elsewhere which would create a registration system for policing landlords. The idea seems to have been derived from the health inspection system that exists in food and beverage establishments in the city. A restaurant that has passed inspection has a green card on the window and is required to keep it signaling it’s compliance with health and food standards so that customers now that this is a sound outfit before stepping in the door.

Our leaders had a similar system in mind A landlord that is the subject to numerous complaints and has demerits from housing inspections for structural, hygienic, and other habitability standards would have to also post a red card or some notice so that perspective tenants would know before renting that this was a sketchy accommodation with a recalcitrant manager. Regular inspections would give incentives to push for improvements so that standards would get right.

I had last attended an board meeting a little more than a year ago and it was good to see old friends and the progress in so many of the leaders. I left thinking about red carding landlords, and this was one of a dozen things that indicated that ACORN Canada is making great progress in ways both small and large!

ACORN Canada board with Wade Rathke on the left, Judy Duncan, head organizer on the right, as well as our guest speaker, Colin Heslop from the CAW in the grey shirt.
Vancouver leaders give a powerpoint of their progress and campaigns in that city. 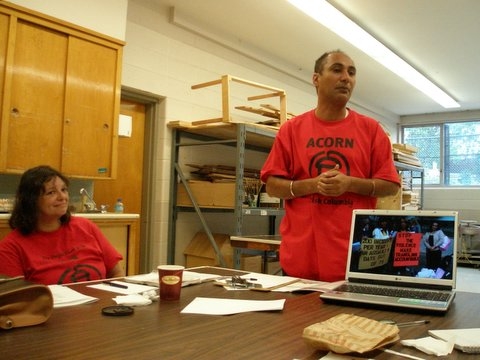